My review of this pamphlet, from 2017, for Ink, Sweat and Tears, is no longer available online, so I'm re-posting it here. 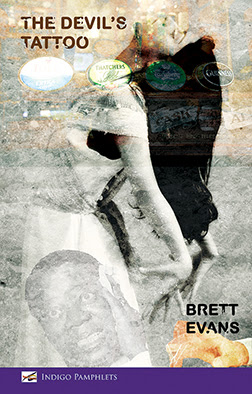 It is hard to escape the feeling that Brett Evans – or, at least, the poet Brett Evans, if you will accept the delicate distinction - was born in the wrong place at the wrong time, or perhaps in the right place at the right time with the wrong constitution.  He is, properly speaking, a blues singer, part Delta, part Chicago, who has found himself instead a “fat, pink alkie” in a small town in North Wales at the beginning of the twenty-first century.  As he says in the same poem (‘Reading Sean O’Brien in the Bath’), “something is amiss”.

The melancholic confessional is a hard thing to pull off without self-pity, but there’s none of that here.  The collection’s first poem, ‘Marshes’ starts in childhood – “we swashbuckled summers across the weir” – and powerful fantasy, and ends in two connected sadnesses which can never be erased: the defeat of Wales and the realisation that “we’re who we are” – an end to childhood.

Dreams and fantasy fuel much of Evans’s poetry, the paradox being that they earth him in the single place he writes from.  He dreams of being in bed with the great blues “moaner” Ma Rainey; he rides “on the trail of the buffalo” with Ramblin’ Jack Elliot; he is an extra in a Spaghetti western “with an unforgettable score”. He dreams simply “of a song”.

Do you notice? Music is a constant – the devil’s tattoo. Most of the drunks are singing (usually “A lament for, and from, the anonymous”), Ma Rainey is singing Jelly Bean Blues, Coltrane’s sax is here beautifully kissing the breeze, Armstrong’s doing over ‘Stardust’, even a scarecrow sways like “a metronome to an orchestra / of gale and sleet”.

Like the dreams of music, the myths of Wales, and the “ugly, lovely children’s world”, desire too keeps the poet busy.  The barmaids “come and go” (probably not talking of Michelangelo), and he dreams of pampering them all. Or, peering from a pub window in the touching ‘Not Raglan Road’, he watches a woman in suede boots: “There is only her moving through this world”.  The poet imagines “a handful / of raindrops may just find their resting place / in her hair”.  This image, almost clumsily described – “may just” is perfectly awkward – is delicately erotic. As is also the “fantasized unclothing” of the sycamore stem in ‘Carving a Lovespoon’. ‘Positions in Bed’ contains not only “an imagined lover” but also “dream pubs”.

My favourite poem, and one I think would do well in schools (that sounds faintly praising but is not at all meant to), stands a little apart from the rest of the collection.  It is not confessional, and yet, insofar as Evans does come close to self-pity it may be the most confessional of them all.  It is called ‘Scarecrow’.  There is explicit analogy with the crucified Christ – “arms outstretched, forsaken, / he wears his unkempt crown”, and later “This son of Man // is blind to purpose, rooted in solitude” – but here there is no redemption.  The suggestion is of a godless world, and God does pop up more frequently in these poems than one at first notices.  How could he not, given the presence of the blues, of Guinness, of Wales?  But he’s here in passing, in ghostly form. The devil is much more real.  There is, in ‘Anticipating Pints of Stout’ a marvellous description of the drink lined up on a bar: “a lechery / of pint-sized priests to knock back without repentance”.  Drink, not religion, brings salvation.

The collection ends as it began, in childhood, or rather in the memory of childhood, and reflections on the present:

I haunt our stomping grounds, my shadow striding

out before me: a giant ghost, coat flapping in the wind.

And the water before the weir forever lapping at the child.

Do we have a word for nostalgia without the fleck of sentimentality that makes nostalgia kitsch? The Welsh word hiraeth is often translated as homesickness, but it may also denote a longing for the past.  Might it do to describe the spirit of these lines?  I don’t know.  I am not a Welsh-speaker, but maybe.

The devil’s tattoo drums through all our lives, and the poet’s desire that “the familiar must become the unfamiliar” – which I take to be one of the things poetry does -  is what defies that beat and makes the real tolerable.  Sean O’Brien and Dylan Thomas are both presences here, both poets capable of seeing wonder in the quotidian.  It is an ability, a tendency, that Brett Evans aspires to, and often achieves, in this short, punchy, thoroughly engaging and coherent pamphlet. 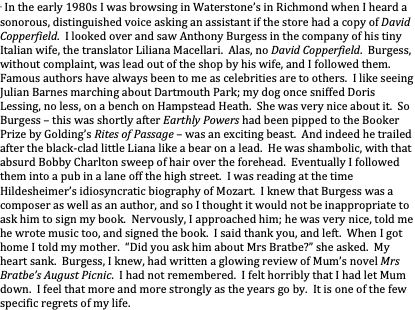 The Rainbow by D.H. Lawrence

The Power of the Dog by Don Winslow

Living on the Volcano by Michael Calvin

A Life of My Own by Claire Tomalin

Under the Greenwood Tree by Thomas Hardy

Year of the Mouse by Jonathan Tafler

A Commonplace by Jonathan Davidson

The Wife by Anton Chekov

Kiss Myself Goodbye by Ferdinand Mount

Tom Jones by Henry Fielding
Twilight of Democracy by Anne Applebaum
Hamnet by Maggie O'Farrell
Second Place by Rachel Cusk
The Rules of Prey by John Sandford
Snow Country by Sebastian Faulks
The Hummingbird by Sandro Veronesi
Exit by Belinda Bauer
A Small Death in Lisbon by Robert Wilson
The Georgians by Penelope Corfield
Night Train to Lisbon by Pascal Mercier
at 01:16 No comments:

Louis MacNeice takes on a persona in the first part of 'Autumn Journal'.

And the train’s rhythm becomes the ad nauseam repetition
Of every tired aubade and maudlin madrigal,
The faded airs of sexual attraction
Wandering like dead leaves along a warehouse wall:
‘I loved my love with a platform ticket,
A jazz song,
A handbag, a pair of stockings of Paris Sand—
I loved her long.
I loved her between the lines and against the clock,
Not until death
But till life did us part I loved her with paper money
And with whisky on the breath.
I loved her with peacock’s eyes and the wares of Carthage,
With glass and gloves and gold and a powder puff
With blasphemy, camaraderie, and bravado
And lots of other stuff.
I loved my love with the wings of angels
Dipped in henna, unearthly red,
With my office hours, with flowers and sirens,
With my budget, my latchkey, and my daily bread.’
at 13:28 No comments: