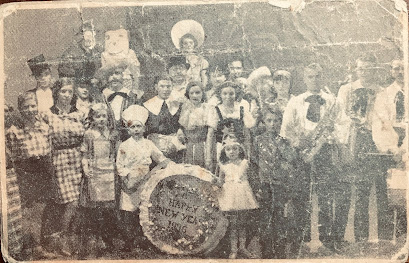 Trinity Ward Junior Imperial League members had their annual fancy dress dance in Gladstone Road on Saturday.
Prizes were awarded for the best impersonation of film stars.
Harry Stroud's Bohemians in attendance, Beatles not having been born yet
at 09:55 No comments:

This is Harold Laski, the intellectual engine of the Labour Party of the 1940s and 50s, and professor of politics at the LSE, addressing the Ealing Labour League of Youth.  The woman is my mother, Jacqueline Clarke, whom he addressed, in his curious accent, and much to her amusement, as 'Charwoman' of the group.  He was very much taken with her conversation and invited her to the LSE where she became a secretary to, among others, Claus Moser, later a close friend, in the statistics department, while at the same time studying for entry to the school.