Blue Moon by Lee Child
Zed by Joanna Kavenna
A Dangerous Man by Robert Crais
Fever Dream by Samantha Schweblin
Leopoldstadt by Tom Stoppard
Resurrection by Leo Tolstoy
How to Fight Anti-Semitism by Bari Weiss
Shakespearean by Robert McCrum
Signatures by David Pryce-Jones
American Dirt by Jeanine Cummins
Passover by David Mamet
The Mirror and the Light by Hilary Mantel
Paddy Clarke Ha Ha Ha by Roddy Doyle
Some Kids I Taught and What They Taught Me by Kate Clanchy
The Art of Love by Ovid (trans J. Michie)
In the Cut by Susanna Moore
This Boy's Story by Tobias Wolff
Self-Portrait in Black and White by Thomas Chatterton Williams
Three Hours by Rosamund Lupton
I Remember by Joe Brainard
The Kill Artist by Daniel Silva
The Vanishing Futurist by Charlotte Hobson
Darkness at Noon by Arthur Koestler
Shadow State by Luke Harding
Genius and Anxiety by Norman Lebrecht
V2 by Robert Harris
Love by Roddy Doyle
A Month in Siena by Hisham Matar
Trio by William Boyd
Rock Crystal by Adalbert Stifter
Bloodlines by Sarah Wimbush
The Girl with a Clock for a Heart by Peter Swanson
Inside Story by Martin Amis
at 10:57 No comments:

Review of The Fighting Jew in Jewish Renaissance 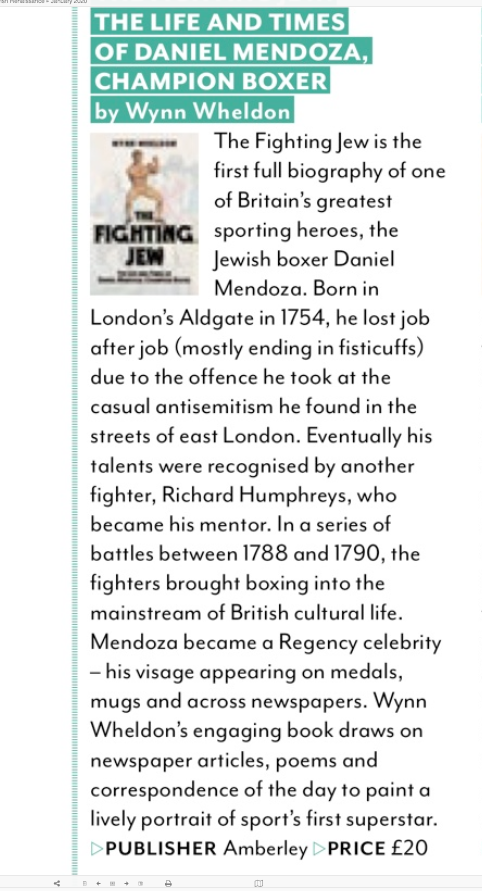 Review of The Fighting Jew in the JC

Daniel Sugarman's kind review in the JC, back in November,  I missed it completely.
https://www.thejc.com/culture/books/review-the-fighting-jew-1.494504

The Fighting Jew by Wynn Wheldon (Amberley Publishing, £20)
Daniel Mendoza was the first British Jewish celebrity. And, as this fascinating work by Wynn Wheldon relates, the champion boxer would break new ground in a variety of different ways. Even his boxing style, which was considered abnormal when he first employed it, became orthodox.
In his celebrated three-fight rivalry with Richard Humphries Mendoza would employ, together with his competitor, an early example of “trash talking”, two fighters taking pot-shots at each other in the recently established British press via mocking letters covered with a thin veneer of civility.
After his retirement, Mendoza wrote what could be viewed as the first proper sporting autobiography, sprinkling the text with a variety of anecdotes from his career. For a century after he stopped fighting, “a la Mendoza” was an idiom used to describe settling a dispute with one’s fists.
While Mendoza was not the first Jewish boxer, he was the first to reach such heights, becoming the acknowledged “champion of England” in a period when the sport had no official federation (and, more dauntingly, no weight classes, so that a fighter could find himself facing someone much larger in the ring). The Jewish pugilist would meet the Prince Regent, a follower of “The Fancy”, as devotees of the bare-knuckle contests referred to the sport. He would even, in 1792, while convalescing in Windsor, conduct what he described as “a long conversation” with George III. As Wheldon writes, while Mendoza would probably not have been the first Jew to meet the king, it is likely that he was the first to have had a long discussion with him.
Wheldon’s passion for his subject shines through — perhaps augmented by the fact that his interest is not just general, but familial. As he reveals in the introduction, his wife is a Mendoza, descended from the champion’s uncle. But the book is filled with information designed to provide a sense of familiarity for present-day readers. Such-and-such a pub, the author tells us on a number of occasions, still stands today (then, more so than now, it was customary for retired sportsmen to operate drinking establishments).
The Fighting Jew charts Mendoza’s rise to fame, his years at the top of his game, and his descent into extreme poverty as his star waned.
Contrary to the popular tropes, then and now, that Jews make bad sportsmen/are good with money, Mendoza was an excellent boxer but woeful with his finances, having somehow managed to spend everything he made (a considerable sum) and then some.
Although not religious, Mendoza was proud of his faith and conscious of the fact that, to Jews and non-Jews alike, he was seen as the physical defender of both the bodies and the pride of his co-religionists. While, as the author is careful to point out, public antisemitism certainly did not vanish due to Mendoza, the idea that he “liberated Jews from attack” as a result of his rise, helping boxing gain popularity among young Jews, is “largely true”.
While there is a certain amount of speculation in Wheldon’s description of events, this does not detract from what is an entertaining and informative book, offering a picture not just of Mendoza himself, but of the conditions of late 18th-century Britain and some of the remarkable characters present in genteel society at the time.
We are told that, after one fight in which he had triumphed, Mendoza was carried to a nearby inn on the shoulders of a friend, with a crowd made up of many Jews shouting “Mendoza Vekhayam” — “Mendoza is alive and well”. Wheldon’s book will surely help keep the story of Daniel Mendoza remain “alive and well” for many years to come.
Daniel Sugarman works at the Board  of Deputies of British Jews, and is a former JC reporter
at 13:22 No comments: