For the first time in my political life, I don't feel like a dissident approaching a General Election.  While my friends have almost always leaned left, I have tended to lean right, in a libertarian way so far as social policy is concerned and in an anti-badguys way with regard to foreign policy.  I've tended, I believe, to vote with my head rather than my heart.  Pragmatism has always appealed to me more than idealism.  I can't believe in a perfect world; indeed I believe the attempt to promote one is getting on for diabolical. Perhaps that makes me fundamentally conservative - I think that people make mistakes, act badly, pave the road to hell with good intentions, and so on.  I don't think you can force them to do otherwise. So, anyway, this time round the nasty party is  Jeremy Corbyn's Labour Party, not least for its sneering dismissal of the anti-semitism in its ranks. It is also obvious that Corbyn and his team are incompetent, so that policies hardly matter (not that the party appears to have any that its members can all agree upon). Corbyn is used to operating, manoeuvring, politicking, at local level. He is a small-minded man.  He was much involved in London Labour Briefing, an arm of Militant Tendency, the inflitrating far left organisation with which Neil Kinnock so almost-thoroughly dealt (Momentum is its child). Corbyn was pro-IRA, pro-USSR, pro-PLO. is anti-Israel, is pro-Iran and pro-Putin, supports Hamas, and thinks that the socialist dictators of Venezuela and Cuba are dandy fellows.  He is a Bennite Brexiteer.  If you want to vote for him, fine, but there is no moral high ground to be gained or even had: it is a vote for a destroyer.  I have no love for Theresa May, and I don't at all like the tone of much of the Brexit rhetoric - it seems to me fundamentally indecent.  Most of all I fear a complete absence of Opposition, which a Corbynite Labour Party promises.  Were Nick Clegg leader of the Liberal Democrats, I would have no hesitation in voting for his party.  He has faults, but certainly not those of Corbyn (whose faults are both moral and managerial), and not those of Theresa May, who seems nervous and control-freaky and overemphatic.  As it is, I shall have to vote for it hesitantly.  Though I can just about understand a Green vote, there is little choice otherwise.
at 02:14 No comments:

This was riveting.  Neither pious on the one hand nor indulgent of a director's fetish on the other.  It took liberties with the text, but in service to the play.  Proper theatre.  And such an extraordinary play, containing a bit of everything, switching from tragedy to comedy without a hiccough, maintaining a current of high emotional power throughout. There were moments when i found myself not breathing, and 'Oh, she's warm' nearly undid me   Orlando James's Leontes was exceptionally persuasive in all his extreme passions - for his friend, in his jealousy, in his pain, and in redemption.  A tincture of camp added a theatricality which did not upset. NRQ's Hermione, sometimes very quiet, had exactly the right degree of dignity and indignation. The club throughly enjoyed itself.  NM and RM were a little snooty - perhaps rightly so - about the high jinks of the sheep-shearing festival (done as a kind of game show, and enjoyable), which denied us some of Perdita and Florizel's sweetest a-courtin', and none of us could really hear Joy Richardson as Paulina.  Sam Woolf as Florizel was very well spoken (in both senses), but the real star was the company itself, which gave this production verve and punch, and left one feeling invigorated on leaving the theatre.
at 01:05 No comments: 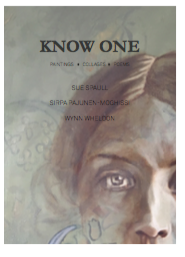 Chrissie Hynde, in a recent documentary, said she likes to walk through cemeteries calling out the names on the tombstones. “When,” she asked, “was the last time their names were heard out loud?”

KNOW ONE is an exhibition of images and words, an exercise in imaginary reconstruction. Three artists – two painters and a poet – have picked one name from a memorial or gravestone from each of London’s ‘magnificent seven’ Victorian cemeteries: Kensal Green, West Norwood, Highgate, Abney Park, Nunhead, Brompton and Tower Hamlets. With a little research each character has been reimagined and in some sense reinvented. This is not an attempt at resurrection, but rather a way of bending memory to the present. To walk through a cemetery is to walk through a community of unknown, but completed, and now largely forgotten lives. Know One asks us to do a little remembering, even if that requires fictional accounts of lost lives. Memories, even our own, perhaps especially our own, are often false. We create narratives of our lives that seen from an objective viewpoint might be unrecognizable. Our subjects, our no-ones, stand for all those forgotten lives, our own (as they will be in due course) included.

POET
Wynn Wheldon is a critic and poet. He has published two collections of poetry, Tiny Disturbances (Acumen, 2012) and Private Places (IDP, 2016). His most recent book is a biography of his father, Huw Wheldon, Kicking the Bar (Unbound, 2016). He is married with three sons and lives in North London. He walks his dog everyday in Hampstead cemetery. www.wynnwheldon.com


ARTISTS
Sue Spaull’s paintings owe a lot to the Old Masters, adopting some time-honoured techniques which she uses to her own ends. Her paintings create a narrative, through her use of composition, paint application and setting. Her play with classical techniques, where images emerge and disappear as the underlying grisaille is at times exposed, at times overlayed with glazes and paint, contributes to the sense that she is capturing forgotten memories through her series of Know One paintings as she re-imagines aspects of lives once lived.
Sue has had her work shown at the Mall Galleries as part of the Royal Society of Portrait Painters Annual Exhibition and in the Federation of British Artists Exhibition. Other exhibitions include What are you looking at? (solo), The Strand Gallery, Progression, the Menier Gallery and The Breakfast Club, Underdog Gallery. She was recently commissioned by the Old Vic to paint a portrait of Glenda Jackson for the publicity for her performance of King Lear. Sue is Deputy Head of Painting at The Art Academy, London. www.suespaull.com 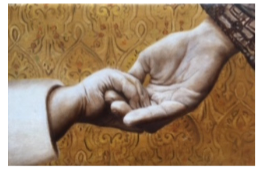 Sirpa Pajunen-Moghissi uses a variety of materials to rebuild the stories of these chosen names. She tries to untangle the lost memories and create images that are loosly based on facts; she borrows both from her own family history and some from the research that is done of each subject. Her art works are created through multiple layers and by a process of deconstruction and rearrangement.
Selected Exhibitions include Royal Academy Summer Exhibition; Hide and Seek, Highgate Contemporary Art (solo); Camou age, Koleksiyon, London; Scandinavia; A Celebration of the Nordic Province, London and Kaapelitehdas, Helsinki, Finland. She is also co-founder and
director of ArtKapsule.
www.sirpamoghissi.com 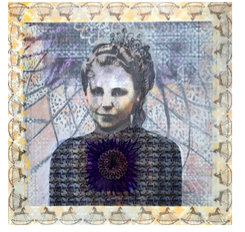 from The Moonstone, by Wilkie Collins, Mrs Clack's Narrative