THE DIG by John Preston

One of those rare short books I think I'll one day read again, like J.L. Carr's 'A Month in the Country' (for my money one of the best novels in English of the 20th century).  Quiet, quietly humorous, wistful, about something real, slow, page-turning, mysterious (though you know what happens).  It has that quality in a drawing that we prefer over the finished oil.  A series of unfinished stories we haven't even seen begun, within one straightforward unearthing. Like the boat itself - oh, sorry, it is 'about' the discovery of the Sutton Hoo treasures - the stories remain forever beyond whole knowledge.  Just as a King once ruled and was buried with all honour, so we know that people once dug him up. The lives of all remain a mystery.

Contains one of the most tender and beautiful love scenes in modern literature.

My thanks to Jody Tresidder for the recommendation.

HOCKNEY at the Tate

First response to the Hockney. It is no good pretending that part of oneself does not tend to go to art exhibitions out of a sense of piety, of 'ought'. But Hockney is different. Hockney is a pleasure. It is impossible not to smile at the Tate. Here is an artist who, for all the personality in the pictures, for all the scenes of his life and friends, seems somehow without ego. Nothing is being angstfully expressed. Instead we have an explosion of seeing. The generosity is overwhelming. Even without colour, in the charcoal drawings, we are being invited in not to the artist's soul but into a way of looking and seeing. Shall be going again and again. Worth joining the Tate just for this. 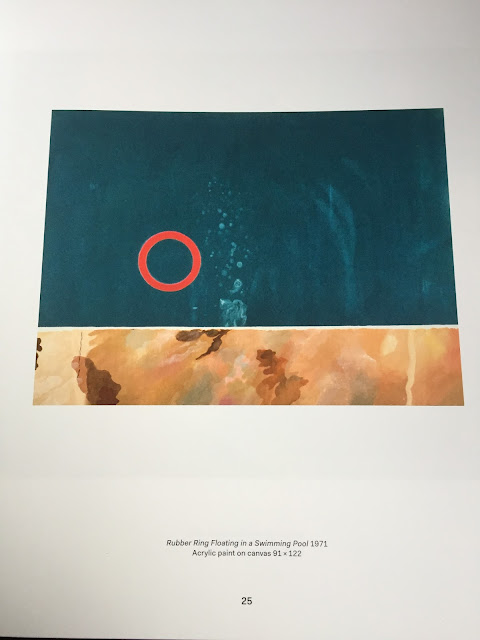 Just finished David Aaronovitch's engrossing 'Party Animal: My Family and other Communists'. Hardly a happy moment in it, yet Aaronovitch's generosity, good humour and understanding make it compelling.A book, I suppose, about fidelity. Very much recommended.

My review of Michael Chabon's 'Moonglow'

My review of Wendy Pratt's pamphlet 'Lapstrake'. Originally written for publication in Lunar Poetry, which I believe is now defunct.  Please feel free to share this.

‘Lapstrake’ is a kind of planking used in the building of boats, whereby the planks ‘lap’ one over the other.  A perhaps marginally more familiar term for this technique is ‘clinker-built’.  The title then suggests the building of something seaworthy. We should expect craft and salt in what follows.  And we get it.
What is it to have lived?
Wendy Pratt’s daughter, Matilda, was stillborn (a gentle euphemism), but we know, from these poems, that she lived, for they would not have been written otherwise.  In some sense what this marvellous pamphlet attempts to do is to explain to its readers that paradox.
Wendy Pratt’s way of making poems is to strand together myth or legend and place (element, perhaps) and person.  In earlier poems, particularly in her collection Museum Pieces, earth was the place: the bones of the dead brought to life through archaeology.  Here it is the sea, whence we all came originally.  In her first pamphlet, Nan Hardwicke Turns into a Hare, Pratt used folk tales of the witch Nan Hardwicke to make sense of her daughter’s death.  As for person, it has almost always been that daughter, Matilda, who is the chief agent.
The collection begins with the title poem, which employs a sort of rhyming diluted sestina form which seems to me technically very accomplished, the rhymes and repeated words lapping over one another (perhaps Pratt has invented a new form we might call ‘lapstraking’). It acts both as a kind of declaration of poetic authority, and, in its content, sounds a cautionary note: “The world / is pouring through to Helheim” (’Helheim’ being the Viking version of Hell – Pratt is a poet of the North East).  We must “nest up / as fishermen must do”, as the planks in lapstrake do. (And that word “nest” is the first note of the motherhood that sings through the collection, often, as here, and understandably, in the minor key).
There follows a set of eight poems under the title ‘And Her Great Gift of Sleep’.  This is a line from W.E. Henley’s ‘Margaritae Sorori’, a poem that asks that the poet be “gather'd to the quiet west, / The sundown splendid and serene, / Death.”  Pratt’s sequence is chronological, a kind of diary of response to the tragedy. The first poem opens with an immediately attention-grabbing multi-image.

The seagulls are static
and strange in the night sky.
Roped to a moon that slips
the bones from their wings,
they hang over the edge,
like a cot mobile.

This could be the description of a picture, but it is not the painting that takes its title from the line preceding ‘And her great gift of sleep’, which is ‘Night with her train of stars’.   That painting, by Edward Robert Hughes, a late pre-Raphaelitish sort of painter, portrays night in the form of a blue winged angel, carrying a babe in her arms; the 'train of stars' are also babies. It crops up later in the set.
This complicated image starts in the “night sky” and ends over a child’s cot, and it is impossible not to think of the preparations parents make for the arrival of their new born – the “nest”. The lines that follow violently oppose this stillness.  The wind “bites like a dog in a fight”.  We learn that “the sea is sick”.  The sea, in just two short poems, has already become a very complicated place.
We find out in the poem that follows what the consequence of that sickness of the sea is: “She is drowning”.  The ocean is amniotic.

I dream the sea
goes out
and the tide line
is scattered with her clothes.

This veers thrillingly close to sentimentality; it almost teases the reader into that safe, unthoughtful place, but preceding this is a “wet-sand-heavy” body, a “stretched belly” and a listening for the sea.  The child has been taken by the water, and her memory is brought back as surely as each high tide.  The dream image is earned.
The poet is never far from water – she crawls from her hospital bath, like an evolutionary creature, to hold her daughter’s body: “I want / to be a siren and sing her back”. Sirens, mermaids – this world of myth and legend is never far away from Pratt’s mind. So often these are easy shortcuts; here their invocation gives them life, they become real.  The poet and the partner are next discovered in a car park in the rain “where the Holbeck Hotel / once stood, before it collapsed / over the cliff edge”.  That too has been taken by the sea, has disappeared over the edge (a recurring motif, this edge, which marks the line between life and death). Then, while walking the dog, a sea mist comes in suddenly and sound takes over from sight:

The sea is scraping the bottom
of a bucket, or dragging a corpse
or tickling or kissing the sand

‘Dover Beach’ comes to mind. The poet listens for the sound of the stones she throws into the water, “but the water / moves on and on and offers / only sea glass and fossils”.  The poet, I think, is listening for the cry of her lost child, or “the underwater / tap-tap”, perhaps, of the second poem.
Pratt’s poetry is full of fossils, bones, the evidence of lives lived and gone. It marks a kind of refusal to admit to history, to linear time.  All those that have lived still live.  The past inhabits the present: “and yesterday is tomorrow and tomorrow is today, yesterday / is now and past and future” sings a dead Minke whale in the last poem in the pamphlet. This refusal of course has added piquancy in the light of Pratt’s own experience of her daughter’s death.
The final poem of the sequence demands that the poet “stop trailing her along behind me”.  It is a brave poem, an attempt to release her child:

I think of her atoms climbing
out of her body, out through the earth,
into the water, into the rain,
into the sea

The tide that in a previous poem drags her “back / and forth for years” is now “the sound of the waves / coming home to the shore”.  The sadness is not diminished, but there is a sense that the poet is recognizing her daughter’s self-agency, that Matilda is being allowed separation, has – and I hope this is not a morbid or offensive or sentimental idea - been born.