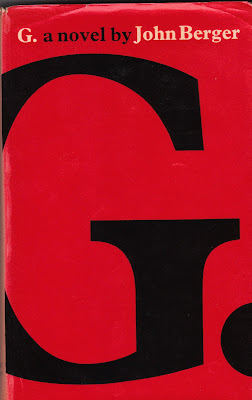 John Berger, I understand, has died, at 90. He was one of the larger characters of my childhood, with that wonderful voice, and serious motorbike. He made several films for my father, and had a deep friendship and intense correspondence with my mother. John asked her to write the original blurb for his Booker prize-winning novel, 'G', and she did so. I reproduce it here, because I think it does the novel justice and might bring it new readers.

"G. is pre-eminently, monumentally, the sexual man: an embodiment, perhaps, of the life-force itself. In him, the claims of sexuality are total, leaving no part of his life and fate untouched. They push their unimpeded way through riot, sudden death, the onset of world war, the fabric of social forms and sexual conventions, until that last moment when under the weight of the world 'desire is indistinguishable from despair'.
G.'s ineluctable preoccupation with women and the life of sex gives unexpected foundation for an astonishing new vision of the physical world and its inner life. Although set at the turn of the century, the action of the novel is not 'condemned to living the present in the past', which in G. himself signifies the beginning of his death. From G.'s birth to the Anglo-American mistress of a wealthy Livornese merchant, every described moment is made a present one with hallucinating precision. Many of these moments relate to the affairs of the world - Garibaldi entering Naples, the first flight over the Alps, riots in Milan, the outbreak of the 1914 war; others to the timeless being of the countryside and its fruits, houses, the play of light and shade; yet others to acts of personal human kindness, rage, desire - the most central of all to the acts of sex. Those moments are so originally and truly observed that they have a rare, persistent, mind-moving effect on the reader.
The book is impressive throughout: in its slow, mesmerising rhythms and frequent startling poetic leaps of thought; in its perceptions at once precisely and sensuously physical and speaking always to the mind's eye; in the strong appearance of the author as storyteller and essayist and philosopher - the only reasonable comparison here would be with Musil; above all perhaps in the head-on collision between a modern writer and the intractable stuff of reality. 'Whatever I perceive or imagine amazes me with its particularity'.
At this collision, John Berger shows us how reality, upon the utterance of a word, disappears: to reassemble, both time and silence are necessary to it. As a result of the author's dedication, patience and highest art both these elusive elements are present in this very remarkable work. Fore this reason alone, G. cannot but help raise critical questions of the utmost importance."
Jacqueline Wheldon, September 1971
at 21:54