My maternal great grandmother was named Matilda Box.  Looking for forebears I came across the following report in the Evening Standard of 24 November 1829.

The hero, Mr Broderip, was worth looking into.  His biography, filched from the DNB, follows the newspaper report.  Turns out he was an interesting chap, acquaintance of Darwin, etc..


Thames-police. — Yesterday Matilda Box, a middle-aged woman, whose emaciated appearance and hollow eyes, bespoke the deepest distress and misery, was brought before Mr. Broderip, the sitting magistrate, charged with stealing two pieces of beef from the shop of Mr. Smelley, a pork butcher, in High street, Shadwell, on Saturday night.
John Marks, shopman to Mr. Smelley, stated that the prisoner called at his master's shop on Saturday night, and cheapened two pieces of beef lying on the board in front of the house, which she took into the shop, as he supposed, for the purpose of having them weighed ; instead of which she put the beef under her shawl, and walked off. He pursued and took her into custody, and afterwards conveyed her to the watchhouse.
The prisoner (who had a child in her arms, which appeared in a sickly state), being called upon for her defence, burst into tears, and said that the most urgent distress had driven her to commit the offence. When she stole the beef, neither she nor her child had tasted food for many hours. About a month since, her husband, who was a ship-joiner, fell from the mast- head of a vessel into the hold, and, besides other injuries broke three of his ribs. He had since been confined in the London Hospital, leaving her with the infant she held in her arms and another child without any means of support.
Mr. Broderip said, if her statement was true, she certainly was an object of pity, and inquired if she had applied to the parish for relief.
The prisoner replied in the affirmative, and said that the overseers of St. George's in the East had given her 4s. since her husband's illness, for the support of herself and two children, but had refused all further relief because she had slept out of the parish.
Mr. Broderip said the child the prisoner held In her arms appeared to be severely afflicted, and inquired the cause.
The poor woman replied that it was labouring under an attack of the small pox, and she was not able to procure sufficient nourishment for its support.
Deverell, the beadle of Shadwell parish, confirmed the truth of the woman's story, and the shopman said his master was aware the prisoner was impelled to the commission of the theft through distress, and had no wish to prosecute.
Mr. Broderip said the poor woman waa a deserving object of compassion, and ordered her to be discharged, with a caution not to be again guilty of a similar theft, or she would be severely punished. Ellis, an officer of this establishment, was directed to go with the poor Woman to the overseers of St. George's, to which parish she belonged, in order that she might be relieved, and the wants of the child supplied. Ellis soon after returned with the woman, and stated that the overseer, whom he had seen, had peremptorily refused to relieve either mother or child, and had ordered her to attend at the board in the evening, when her claim would be taken into consideration.
Mr. Broderip, after some severe remarks, ordered some food to be instantly given to the wretched woman and her child, and directed Ellis, the officer, to make another application to the overseers of St. George's in the evening, and if they again refused to relieve her, to represent the case to the Lambeth-street magistrates. 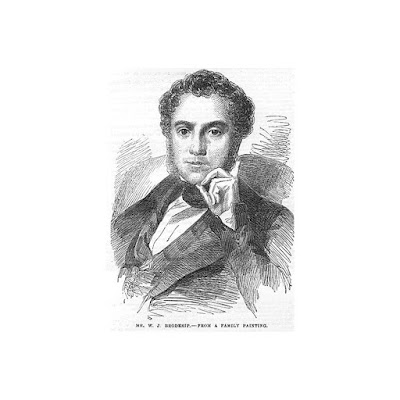 Broderip, William John (1789–1859), lawyer and naturalist, was born on 21 November 1789 at Bristol, the eldest son of William Broderip, surgeon. After being educated at the Revd Samuel Seyer's school in his native city, he matriculated at Oriel College, Oxford, in 1807 and graduated BA in 1812. While at college he found time to attend the anatomical lectures of Sir Christopher Pegge, and the chemical and mineralogical lectures of John Kidd. After completing his university education, he entered the Inner Temple, and began studying in the chambers of the then well-known Godfrey Sykes, where he had as contemporaries Sir John Patteson and Sir John Taylor Coleridge. He was called to the bar at Lincoln's Inn on 12 May 1817, when he joined the western circuit, and shortly after, in conjunction with Peregrine Bingham, began reporting in the court of common pleas. These reports were published in three volumes between 1820 and 1822. In 1822 Broderip accepted from Lord Sidmouth the appointment of magistrate at the Thames police court. He held this office until 1846, when he was transferred to the Westminster court, where he remained for ten years. He was compelled by deafness to resign, having obtained a high reputation for his good sense and humanity. In 1824 he edited the fourth edition of R. Callis's work on the Statute of Sewers, which, with its combination of antiquarian and strict legal learning, was exactly suited to his taste and talent. He was elected bencher of Gray's Inn on 30 January 1850 and treasurer on 29 January 1851, and was given care of its library.

Throughout his life Broderip was an enthusiastic collector of natural objects. His conchological collection was unrivalled, and many foreign professors inspected the treasures which were accumulated in his chambers in Gray's Inn. This collection was ultimately purchased by the British Museum. He was elected a fellow of the Linnean Society in 1824, of the Geological Society in 1825, and of the Royal Society on 14 February 1828. In co-operation with Sir Stamford Raffles he was instrumental in the formation of the Zoological Society in 1826 and was one of the original fellows. He was secretary of the Geological Society for some time, and performed the arduous duties of that office with Roderick Murchison until 1830. To the Transactions of this society he contributed numerous papers, but most of his original writings on molluscs are to be found in the Proceedings and Transactions of the Zoological Society. Broderip's descriptions of animal habits were graphic. His ‘Account of the manners of a tame beaver’, published in the Gardens and Menagerie of the Zoological Society, is a prime example of his tact as an observer and power as a writer. He published extensively on zoological matters. His contributions to the New Monthly Magazine and to Fraser's Magazine were collected in the volumes entitled Zoological Recreations (1847) andLeaves from the Note-Book of a Naturalist (1852). He wrote zoological articles in the Penny Cyclopaedia, including all the articles relating to mammals, birds, reptiles, crustacea, and molluscs. His last publication, ‘On the shark’, appeared in Fraser's Magazine in March 1859. Broderip died in his chambers, 2 Raymond Buildings, Gray's Inn, London, on 27 February 1859. He was unmarried.