Richard Cawston, who succeeded Dad as Head of Documentaries compared Watkins to Mozart.  My Mum used to say that Watkins 'was in love with violence'.
at 22:46 No comments:

Am I wrong to hear in Meursault's voice hints of Houellebecq's first person?
at 23:53 No comments:

I've lived longer without a father than with.  Odd.  He died thirty years ago today, 14 March.  It is also Meg's birthday.  Here are a couple of photos of the two of them.  In the first Dad is doing one of his mock-cross faces and looking a tad Connery-ish, Meg is looking like, well - Meg. 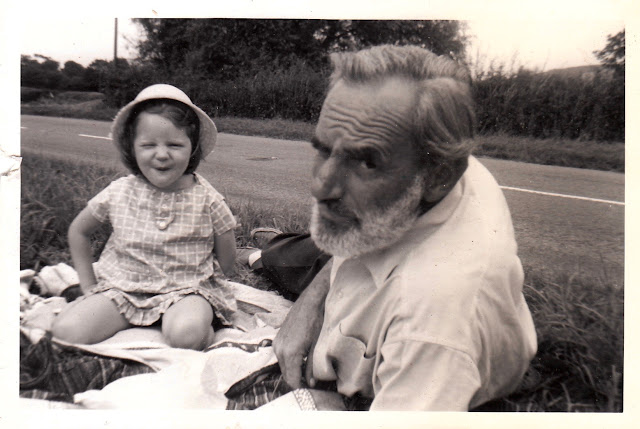 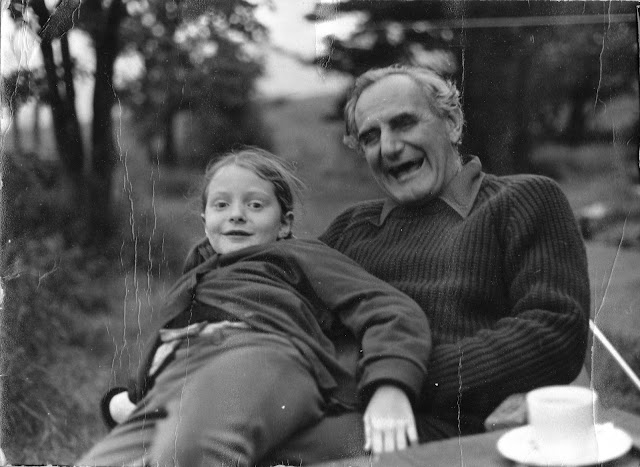 ‘But that was nothing to what things came out
From the sea-caves of Criccieth yonder'
‘What were they?  Mermaids?  Dragons?  Ghosts?'
' Nothing at all of any things like that.'
' What were they then?'
‘All sorts of queer things,
Things never seen or heard or written about,
Very strange, un Welsh, utterly peculiar
Things.  Oh, solid enough they seemed to touch,
Had anyone dared it.  Marvellous creation,
All various shapes and sizes and no sizes,
All new, each perfectly unlike his neighbour,
Though all came moving slowly out together.'
' Describe just one of them.’
' I am unable.'
' What were  their colours?'
' Mostly nameless colours,
Colours you would like to see; but one was puce
Or perhaps more like crimson, but not purplish.
Some had no colour.'
‘Tell me, had they legs?'
‘Not a leg nor foot among them that I saw.'
' But did these things come out in any order?
What o'clock was it is?  What was the day of the week?
Who else was present?  How was the weather?'
‘I was coming to that.  It was half past three
On Easter Tuesday last.  The sun was shining.
The Harlech Silver band played Marchog Jesu
On thirty seven shimmering instruments,
Collecting for Caernarvon’s (fever) Hospital Fund.
The populations of Pwllheli, Criccieth,
Portmadoc, Borth, Tremadoc, Penrhyndeudraeth,
Were all assembled.  Criccieth’s mayor addressed them
First in good Welsh and then in fluent English,
Twisting his fingers in his chain of office,
Welcoming the things.  They came out on the sand,
Not keeping time to the band, moving seaward
Silently at a snail's pace.  But at last
The most odd, indescribable thing of all,
Which hardly one man there could see for wonder,
Did something recognisably something.'
' Well, what is?'
' It made a noise.'
‘A frightening noise?'
' No, no.'
' A musical noise?  A noise of scuffling?'
‘No, but a very loud, respectable noise --
Like groaning to oneself on Sunday morning
In chapel, close before the second psalm.'
' What did the mayor do?'