So far in this world cup there has been lots of good stuff, but the two best games have both featured Wakes, and Wales have lost them both.  Just.  Absolutely heartbreaking.
at 18:12 No comments:

“It was one of those days you sometimes get latish in the autumn when the sun beams, the birds toot, and there is a bracing tang in the air that sends the blood beetling briskly through the veins.”
Bertie Wooster
at 10:36 No comments:

AGNES MARTIN at the TATE MODERN

Curious, interesting exhibition, though I left feeling vaguely uncomfortable, as though I'd been asked to enjoy someone's desperation.  I understand that Martin suffered from schizophrenia (is that still allowed that word?), and it is almost too easy to see her art as a desperate way of controlling the world.  On each square canvas - and they are almost uniformly square - she imposes grids of faint washes of acrylic or pencil - sorry, graphite - that, in such numbers attests to an almost worrying obsession.  It is as though Durer, say, was only ever intrested in painting rabbits.  The curious, paradoxical effect is both of the very abstract, cold, and the extremely self-expressive.  The result is that there is little place actually for the spectator to play. Having said that, there are works, which, close up,  have an almost hypnotic effect, a little like the way one begins to see patterns in the wallpaper or plaster while soaking in the bath.  I like the painting - actually gold leaf inscribed with pencil - called 'Friendship', made up of pairs of contiguous oblongs, all a little different.  I liked as well 'The Islands' with its smudgy white daubs.  These seem somehow to reflect rather than impose.  They are more generous and inviting.  Against these there is a series of paintings called 'The Island' - paintings that are supposed to hang - to be seen - together.  You have to have very good eyesight to enjoy them as a single work, because, from amidships,  they resemble simple squares of white.  Of them Martin wrote that they are 'formless'.  I think the utter reverse; they are deeply formulaic - that is their essence.  What I miss from this exhibition is the physical - any sense of release: the paintings are humourless (there is hardly a curve to be seen), and, rather, in the end, loveless. I left, as I say, feeling pity rather than awe, but at least wondering, not for the first time, what the point of art is.
at 22:24 No comments:

SONG: Jemmy Jumps, in the Farmer

This is from a publication called Edwin's pills to purge melancholy: containing all the songs sung by Mr. Edwin, ... since his first appearance in London.  It was published by William Holland in 1788 (Holland's was on the corner of Oxford Street and Berners Street).  I came upon it while researching the life of the great Jewish boxer Daniel Mendoza, whose name appears in the final verse.  Anyway, whatever the hell it is about, it's a cracker and very probably rather low.

LOOK'E, dear Ma'am, I'm quite the thing,
Nattibus hey ! tippity ho!
In my shoe I wear a string,
Tied in a black bow, so.
Cards and dice! I've monst'rous luck;
I'm no drake, yet keep a duck,
Tho'not married, yet I'm a buck,
Lantherum swash, kee-vi.


Sometimes mount a smart cockade,
Puppydum hey, struttledum, ho!
From High-Park to the Parade,
Cock my cary kee,
As I pass a sentry-box,
Soldiers rest their bright firelocks,
Each about his musquet knocks,
Rattledum slap, to me!


In the Mall, Ma'am gives her card,
Cashedy me, kissady she!
Sit before the stable-yard,
Leg-orum lounge a-row;
Pretty things I softly say
When I'm ask'd our chairs to pay,
Yes, says I, and walk—away
Pennybus tartum, ho! 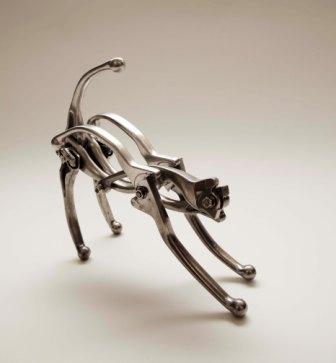 Just wonderful.
Sculpture by a man who can make anything out of anything.
at 00:55 No comments: