Afterwards, late, walking home from hospital,
that December hour too blatantly moonbright
- such an unworldly moon so widely round,
an orifice of scintillating arctic light -

I thought how the effrontery of a similar moon,
a Pirandello moon that would make men howl,
would, in future, bring back the eidolon
of you, father, propped high on pillow
your mouth ajar, your nerveless hand in mine.

At home, feeling hollow, I shamelessly wept
- whether for you or myself I do not know.
Tonight a bracing wind makes my eyes cry
while a cloud dociles an impudent moon
that is and was, and is again, and was.

Men become mortal the night their fathers die.
at 00:46 No comments:

Excerpt from a letter to my mother, in Notting Hill, from my father, in Oxford, Mississippi, dated October 14, 1959

I did not see Falkner [sic] in the end, but only Mrs Falkner: but this was beyond all reasonable expectation.  The Connection is made, & if ever Falkner wants a platform, I think she’ll fix it.  But I don’t suppose he ever will.
He has lived here all his life.  The house is simply beautiful.  White as usual, built of wood on Kentish ply-board lines, the usual tall wooden portico pillars, cedars surrounding.  The tall, airy, high-ceiling-rooms and the slender wooden bannisters & the weathered timber floor all joined in a lovely unity.  They were burning cedar in the fireplaces, & the aroma spread through the house.
Falkner stands for absolute negro equality, for the new South, for the American south in a way.  Like an Irishman he savours and chews over the intolerable inescapable marvellous memories of his childhood & his past, but could not, I think, be called backward looking in any way.  He is unsentimental, and is no longer fighting the civil war, as so many of them are in a fatuous Golf Club kind of way, claiming association and identity with virtues & graces they never had & never will have except by bogus proxy – and yet the picture over the sitting room fireplace in Falkner’s house is the picture of Robert E. Lee…
Mrs Falkner, Mrs Estelle, is 58, delicate, survivor of two husbands, fragile, once a Southern Belle, and an absolute No 1 knock-out with more sex-appeal in pure concentrated quite irresistible form than all of Hollywood added together & multiplied by six.  She was adorable, and, of course, quite impossible I suppose.  She does not vote, ON PRINCIPLE: and what the principle is, as you watch her holding her cigarette between her fourth and little finger, her hands moving exquisitely on the fulcrums of her thin brown wrists, as you watch here alert, lovely head, and take in the lace and the fragrance, what the principle IS, who can tell?


I liked her.  A knock-out. Once an alcoholic I seems, and her sister a crook.  Oh Jay, you should have been here.  To hell with California, interesting like Selfridges: but here, the interest is like Chartres or Dublin.”
at 22:19 No comments:

Painter Gordon Stuart died today at the age of 91.  His portrait of my father hangs in - or at least is owned by - the National Portrait Gallery.  Among others, he also painted Kingsley Amis, Dylan Thomas, Beryl Bainbridge, and Thomas Beecham. Below is a detail of one of his preliminary sketches for the portrait of Dad. 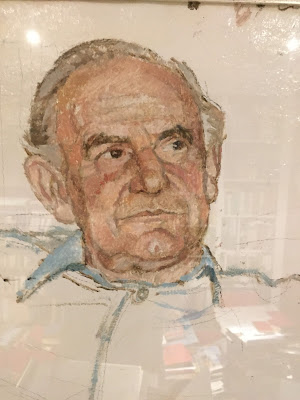 Sorry to read of the death of Owen Chadwick, who wrote one of my favourite books, 'Victorian Miniature' - a study of the relationship between the squire and the parson in the Norfolk village of Ketteringham, between 1838 and 1869.  Doesn't sound like a page turner, does it, but it did it for me. A little classic. 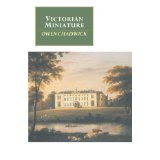 'It reads like a novel, and it is in fact a small masterpiece.' John Clive, The Times Literary Supplement

'Better than any fiction.' The Times

'Chadwick tells their story with grace and great charm, for he is as fully a master of writing as of history, and there can be hardly anybody who would not rejoice over the reading of such a book as this, which is quite fascinating from its first page to its last.' The Guardian

Note left by Dad at my college in Oxford, 1978?  The drawing is a self-portrait with Mum.  Both pretty accurate actually. 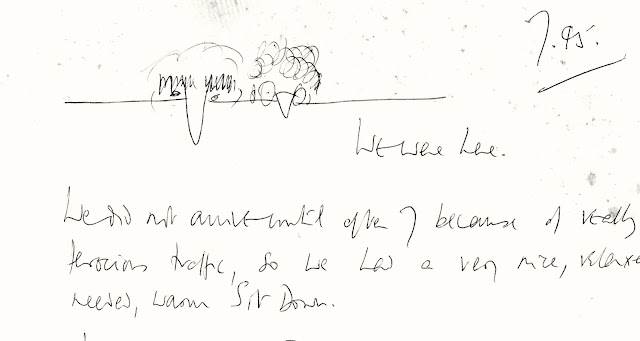 THE ART INSTITUTE OF CHICAGO

from a letter written by Dad in Chicago to Mum in Notting Hill, 1959
Note: the art gallery here is stupendous.  At first, I was angry at the thought of all this splendour, the Rembrandts & the Picassos, the El Grecos and the Utrillos, all the wealth of pictures being here in this brutal town.  And I sneered at the hanging, the spaciousness, the smooth money-no-object presentation, and saw it as being based simply on the fact that this picture is worth three million dollars, that another cool million.  But gradually the snarl & the criticism died down & became irrelevant.  I would prefer to see Velasquez in some dirty gallery in Italy or Spain, where the glory is not abstracted, conscious, but a fact of being, like the glory of the sun and the whiteness of dust – but all the same all this was trivial & petty because in fact the artists forbid you through pure power to do anything but realise that you are in the presence of people whose vision & authority is so enormous that you are only a mangy mongrel anyway & you had best keep your trap shut.  So I wandered about, as you do in a gallery, at a loss even for emotion or thought which could match the guessed-at glory, and in the dim and ignorant way, paid my respects and yours to dozens of pictures I had seen a hundred times in reproduction, notably the double-picture landscapes by Monet, one at sunrise & one at sunset; to strip cartoons by Goya; to Picasso after Picasso (mainly blue ones – that old guitar player, those three desolate figures on a foreshore) to Bosch (Paradise) El Greco (the gigantic assumption of the Virgin) & to Rembrandt who towers so humanly and is really damn and blast all words and ignorance and stupidity (one’s own) so undeniably, bugger the gas works, bloody marvellous. 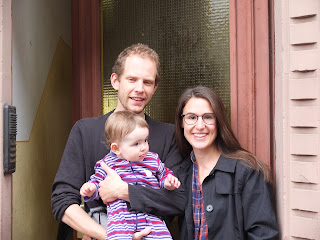 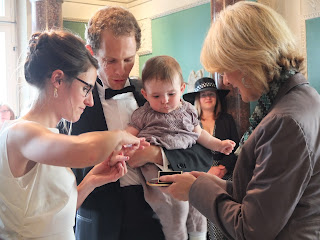 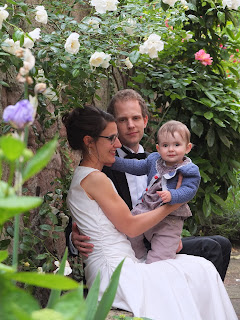 from 'The British Experience in Television', Dimbleby Lecture 1976 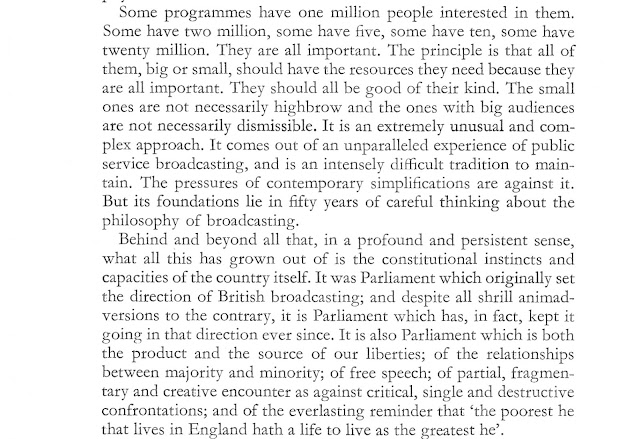 Zounds! I was never so bethump'd with words


Since I first call'd my brother's father dad.

I understand that TV Centre is to be demolished. A shame. Great building, much loved by those who worked there. Probably fair to say that it was among the most creative places on earth during the 60s and 70s. (I wonder what will happen to the ‘Statue in the Doughnut’ – the figure being the sun god Helios.) Here's a pic of Sixth Floor Nabobs: Kenneth Adam, Michael Peacock, David Attenborough and Dad (Huw Wheldon). 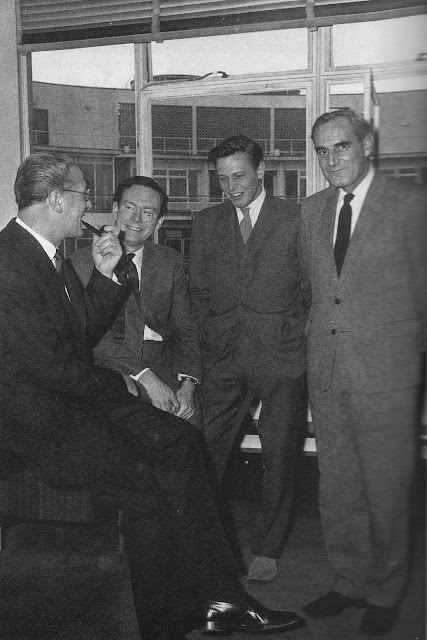 Me in all my glory, outside what may be my favourite bookshop in the world, ever.  Palma, Mallorca. Four floors of chaotic organisation. Had neither the time, nor the baggage space to actually purchase anything, but at least grabbed a kwik pic of Damon Runyon's Poems for Men (the book itself was in pieces). 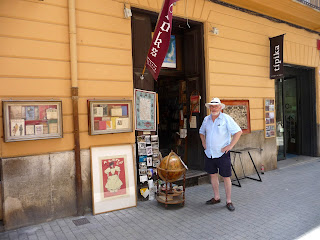 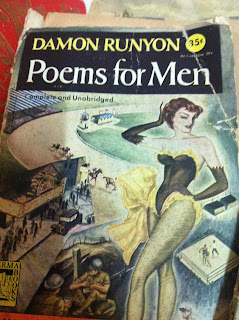 LOVE WITHOUT HOPE by Robert Graves

Love without hope, as when the young bird-catcher
Swept off his tall hat to the Squire's own daughter,
So let the imprisoned larks escape and fly
Singing about her head, as she rode by.
at 17:33 No comments: