Five years ago Sam Munson published The November Criminals.  His new novel, The War Against the Assholes is out now.  I look forward to reading it. Here follows my Amazon review of the first book.

To begin with, you think you are in one of those novels by young men that describe the debauched life they lead as though it was interesting. Sex, drugs and rock and roll. Certainly there are drugs, weed, here, in fact importantly so. But there is no graphic sex and no unworthiness before the great god Rock. In fact this is a rather high brow book, dense, intellectual, even difficult. 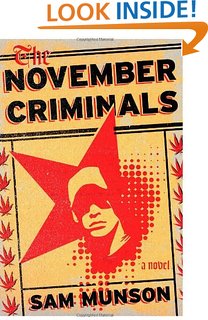 The voice is Catcher in the Rye conversational, the conceit being that the book is an essay written for the benefit of the University of Chicago selection board, describing the narrator's best and worst qualities. Addison Schacht, brought up by his oafish but good-natured artist father, sells dope to his high school fellows and is fluent in Latin, with a special love for the Aeniad.

The story of the book, such as it is, recounts Addison's amateurish attempts to discover the murderer of a classmate, Kevin Broadus. Addison fails utterly but in so doing recreates himself, emerging a sadder but wiser man, one who can, at eighteen years old, not only smoke, but buy cigarettes, not only love but admit to loving, his girlfriend, the intriguing Digger.

Kevin Broadus, a saxophonist in the school band, attracts Addison's attention when, in a class about Music and Its Relation to African American Literature Broadus, an African American, does "not particularly" agree with the notion, put forward by the teacher, that African American literature is less constrained than other literatures. This is the only thing Addison remembers Kevin saying in class, ever, but before he can congratulate him Broadus is murdered.

`The November Criminals', as I learned it, was a phrase given to the Germans who surrendered at the end of the First World War and who subsequently accepted the Versailles treaty. I don't know whether it was Hitler's own phrase but it could have been. So: traitors (but, from our point of view, surely, good traitors). If you know this before you start you spend much of the book wondering about its title. The explanation, when it comes, is not entirely clear, but I think that what Addison is struggling to say is that we are all of us traitors to an ideal notion we have of how things should be. Or something. (Addison loves his italics and his 'ors' and 'whatevers').

But perhaps his point is more specifically about contemporary America. Addison certainly has very little time for multicultural orthodoxy, the central tenet of which is: "we're all still racists today". Addison regards this as mere gesture; indeed, in its extended meaning he regards it, as exemplified by Black History Month, say, as "the ultimate fantasy of a slave owner". For his part he, a Jew, collects Holocaust jokes. It is impossible to read this other than as an act of defiance that proclaims THIS IS HOW THE WORLD IS - BE TRUTHFUL.

`The November Criminals' is a superior work of fiction, written with authority and verve. It is occasionally very funny. Chicago would have been foolish not to accept Addison Schacht.