A WEDDING IN HEIDELBERG

If you're going to get married somewhere romantic Heidelberg is fairly high on the list.  A ruined castle on a hill, cobbled streets, an ornate and lovely old bridge, and a history of philosophers, poets and painters swooning about the place.  Heidelberg is actually a wedding destination.  Couples travel there to get married.  On the day that my son and my clever, beautiful and cheerful new daughter (and mother of my grand-daughter) were spliced a great slew of weddings was visible going in and out of the Rathaus, in and out of the cafes in the market square, togged up and ready to celebrate.  You couldn't move for uncomfortably buttoned-up fathers and uncles, and women in new tights and hair-do's.  And gleaming among them the whites and creams of the brides, each with a bouquet yet to be hurled.


Rain had been promised, but it showered gently, sweetly, only for a few moments last Friday morning.  We clattered over the cobbles from our hotel and met our fellow guests plus of course the bride, the groom and GD).  The chatter was mostly in German, but the Germans being well-educated most of them spoke good English.  I recognised the best man, soon to be a medical doctor with an interest in neurology, and a ready and enjoyable propensity for laughter (and a bow-tie, the band of which, said the doctor, is in German called a Vater-morder - a fatherkiller).  The bride's father, a lovely chap, but shy, was armed with a camera (he is a photographer) and cleverly used the equipment to keep out of too many airy conversations. The bride's mother looked cool, calm and surprisingly collected (but whispered to me after the ceremony that she thought they looked "a good team").  The bride's sister sported an impressive embonpoint and a wide smile, and my English sons laughed and nodded and were graceful and gentlemanly.  My wife agreed with the small talk as best she could and looked reassuringly beautiful. 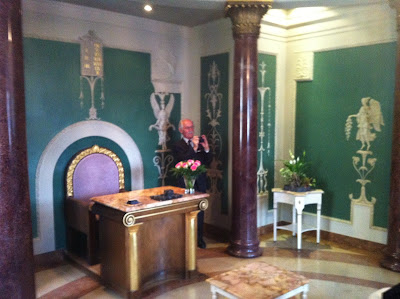 The ceremony took place in a room decked out as a sort of Wedgwood teapot. Very elegant and appropriate.  I'm fairly sure that the 'family' were the only ones officially invited in, but there were no officious types to keep anyone out and the little room was packed.  The registrar, a handsome woman, read from several very large pages, though to what effect I do not know.  The GD occasionally burbled and squeaked and kept everyone in good humour. I sat next to the bride's mother and when the important part had been concluded she leaned into me - "it is done".  We clapped, and trailed out to find a string quartet waiting to play a series of lollipops.  The lead violinist turns out to be a physicist working on crystals that will render all our phones and tablets and wotnots flexible and thin, so easily lost. 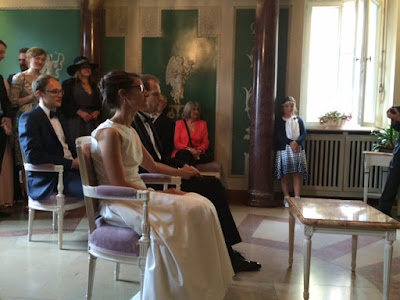 Kir-royals followed at a cafe in the Kornmarkt, overlooked by the schloss, which was a good, ooh, two minutes walk away.  We ate fairy cakes and fresh pretzels. I talked to a woman doing a PhD about the interface between politics and scientists finding ways to ameliorate the effects of climate change. I think. She had around 5 years to finish it.  She doesn't like Chicago.  She likes Normandy.  She's never been to England.  I felt conscious of being surrounded by intelligent young people, of "intellectual outstandingness". Which is a nice feeling and quite rare.

We had time for a siesta before heading back to the Restaurant Hugo for the wedding feast. Restaurant Hugo is one of those places that caters to the would-be bohemian in us - all wooden tables and empty wine bottles - while actually serving very good food.   Our meal was terrific - one thing after another - an amuse-bouche followed by a starter of goats cheese and pistachio, followed by a dish of salmon and chorizo (delicious), a sorbet, and perfectly cooked braised fillet of beef with dauphinoise and some kind of chutney.  Apparently the steak was daubed with a little chocolate a la mexicana.  Pudding was a tiramisu and ice-cream with pepper.  Very Heston.  I sat next to an attractive young woman in a loose orange frock who was doing PR for a Jazz Festival but was trained as a philosopher.  She spoke good English and helpfully translated everything the enthusiastic sommelier had to say about each new wine (which was usually quite a lot). Rather disconcertingly she told me I was known to be funny.  I think I may have rather disappointed her.


Speeches were made,  two in German - one by the Father of the Bride, one by the Mother of the groom, and one in English, by me.  Actually, I didn't make a speech at all, but read Michael Donaghy's beautiful poem, 'The Present', and made a toast to the other parents.  Then my son made his speech, described afterwards by one of his closest friends as "the most unromantic speech ever made by a groom at a wedding feast, and it made me cry".  Actually the friend was wrong.  This was a speech - a paper, my son called it - that sought to find a rationale for the occasion for two decidedly non-religious people for whom social convention has no special demands.  Despite all attempts to derail himself, he came in the end to the conclusion that it must be for love.  Probably the most honest, and therefore most romantic wedding speech, made in Heidelberg for years, although knowing the place possibly not the only one to feature quotations from Immanuel Kant. Thanks are due to another son for this observation, though I think I would have come to much the same conclusion on my own, had I not been in tears myself (both from laughter and from, well, an overflowing of paternal tenderness). 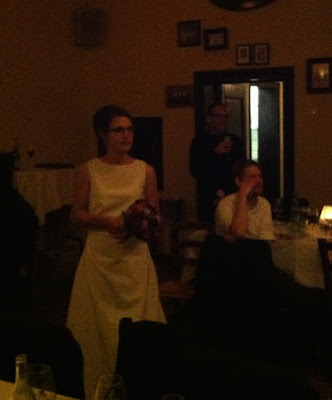 There followed a rendition, with guitar and one of those instruments you blow into that isn't a bagpipe, of 'All You Need is Love', which supplied a tiny seasoning of the hippie-spiritual, and a rousing 'Love and Marriage' sung by various members of the crowd, one of whom wore a flat cap and braces throughout the entire proceedings.  There was also a sort of cat-walk business apparently in hommage to Germany's Next Top Model, which is the ironic must-see programme in the land that gave us Marlene Dietrich and Heidi Klum.

The electrically-supplied music seemed to have arrived from some other wedding.  It certainly wasn't what my son had planned, but everyone seemed to be happy despite its quite extraordinary mediocrity.  Germans absolutely love anything that involves clapping along to things, and once partying it is hard to stop them.

We departed a little earlier than we perhaps ought, but two of us were invalids, and I was knackered from trying to dance to music I wouldn't be seen dead moving to in the UK. I retain a modicum of snobbishness in these matters.

It was a stupendous day.  Groom in DJ and cummerbund (borrowed by the British from Indians to wear in place of waistcoats), bride in a wonderfully unfrilly cream dress she'd bought in Luxemburg (where her parents live). They had conducted themselves - as they always do - with grace and tact and cheerfulness, and I love them both. Their daughter, GD, was equally a part of the scene, mollycoddled by all but unfazed. Three stars. 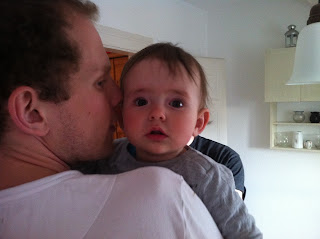