MAY WALK IN JUNE

We were supposed to meet at a pub in Luxborough, but the Royal Something-or-other obviously regards itself as too grand to open on a Friday lunch-time, so we instead gathered at the White Horse in Stogumber, opposite the Church in which Sir Francis Drake's father-in-law is buried.  It had been planned that his daughter Elizabeth would marry someone else in the same church, but a meteorite crashed through the roof on the morning of the wedding, and it was decided that this was not a good omen.  Anyway, there was not a meteorite in sight on this rather lovely day, that promised to be hotter than forecast. We had a couple of pints and a plate of ham and eggs before driving to Luxborough to begin our mighty trial. 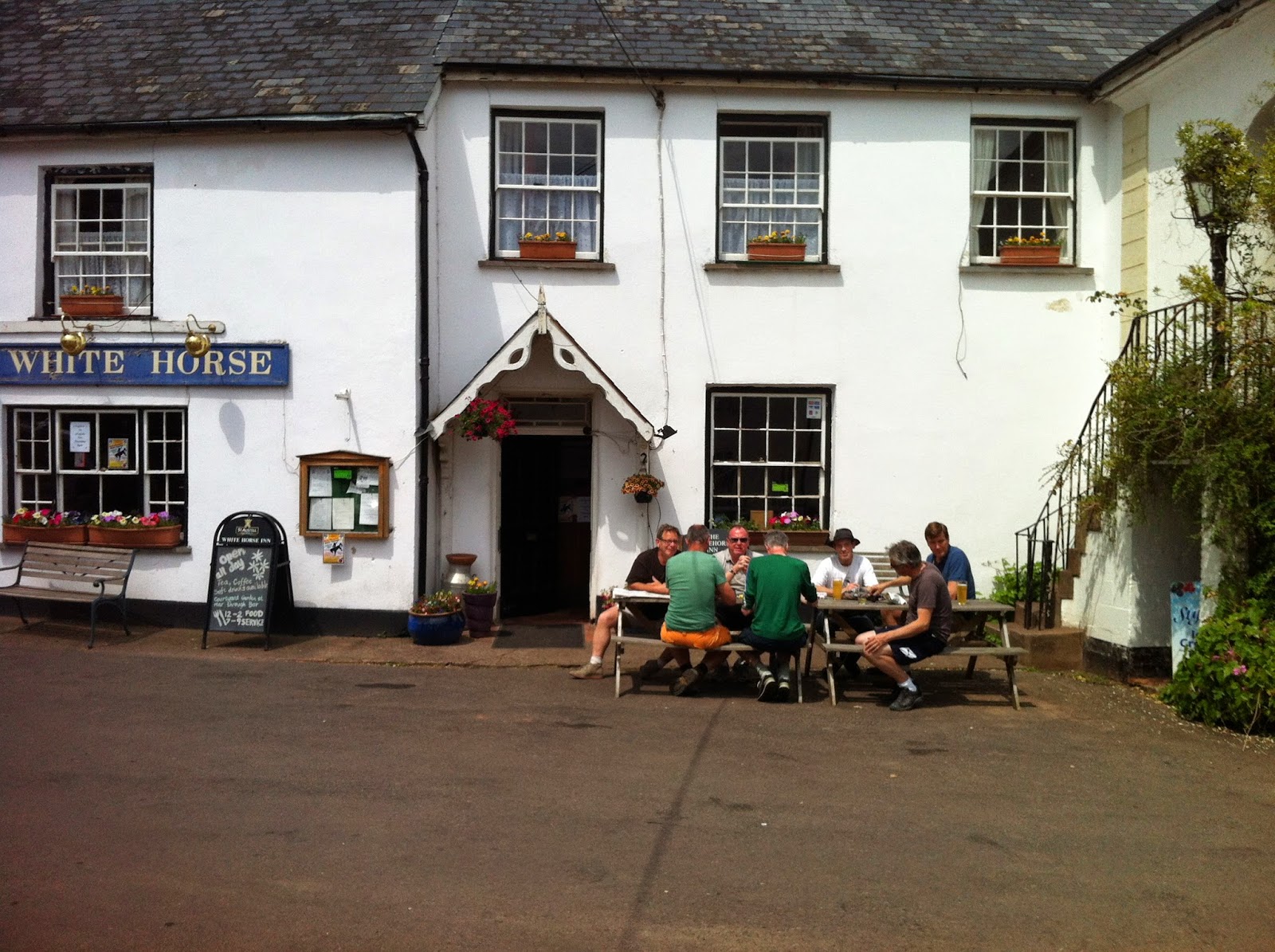 From there we went by profoundly curlicued and not unhappy paths to Dunster by way of such places as here: 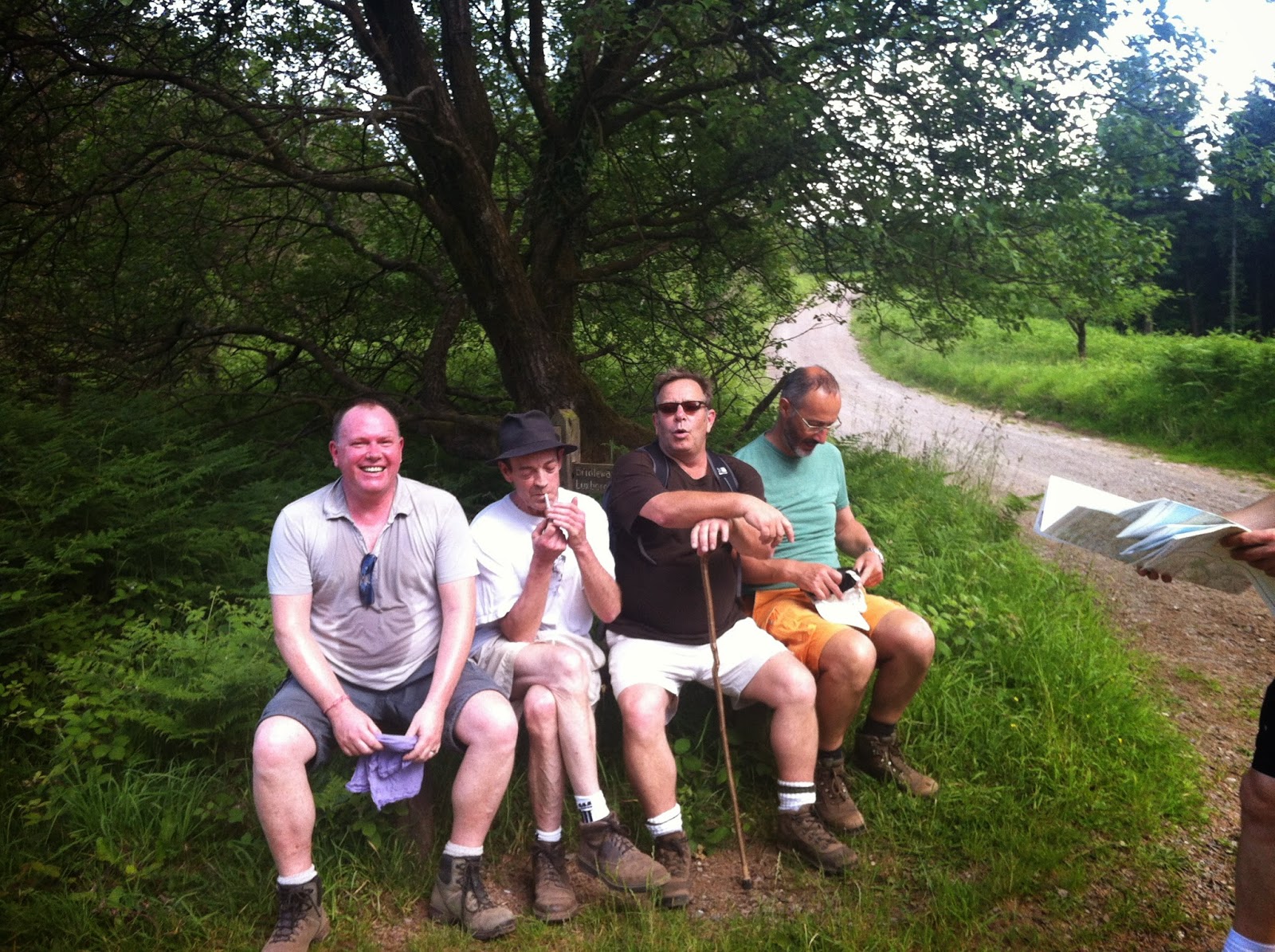 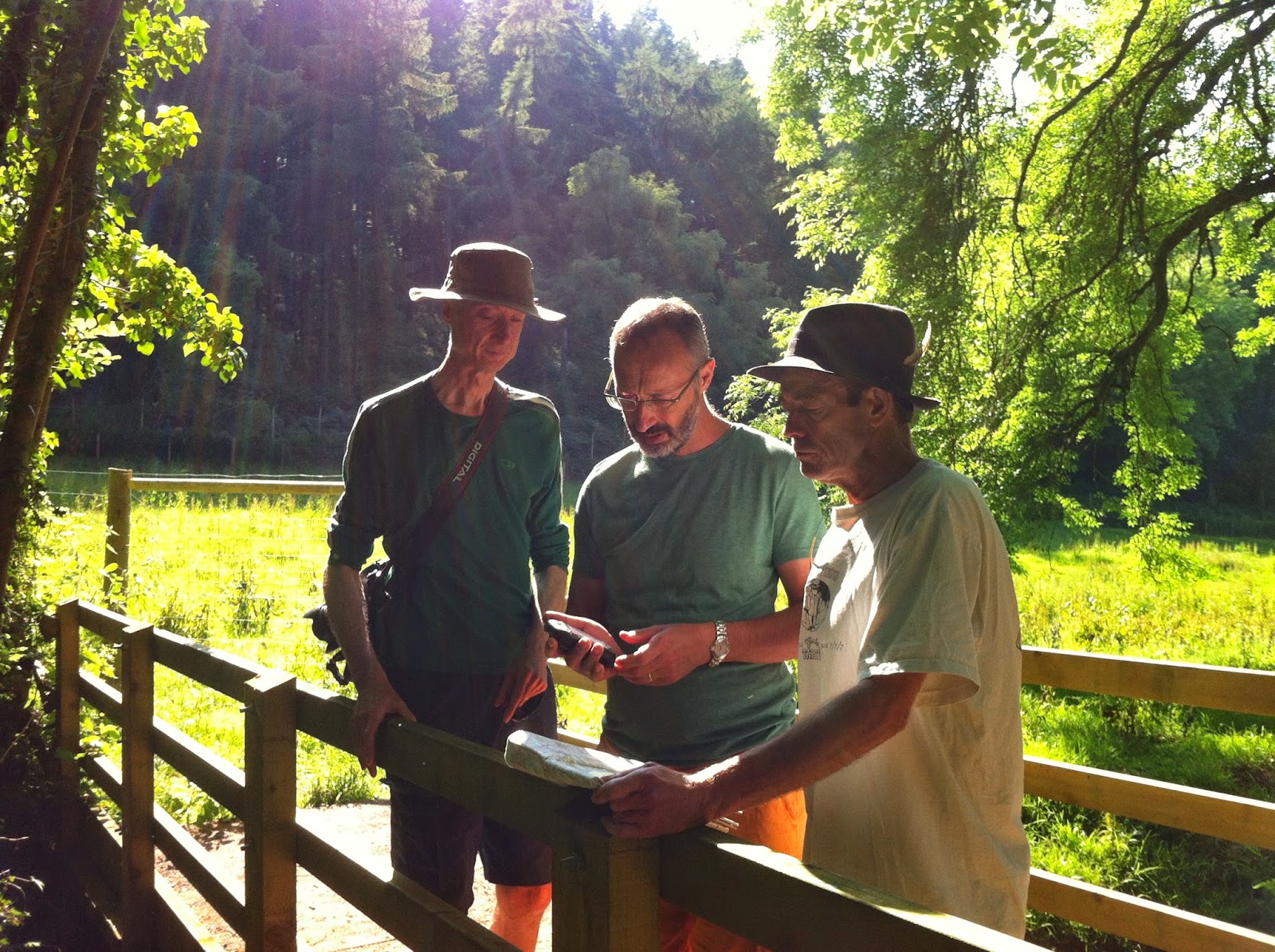 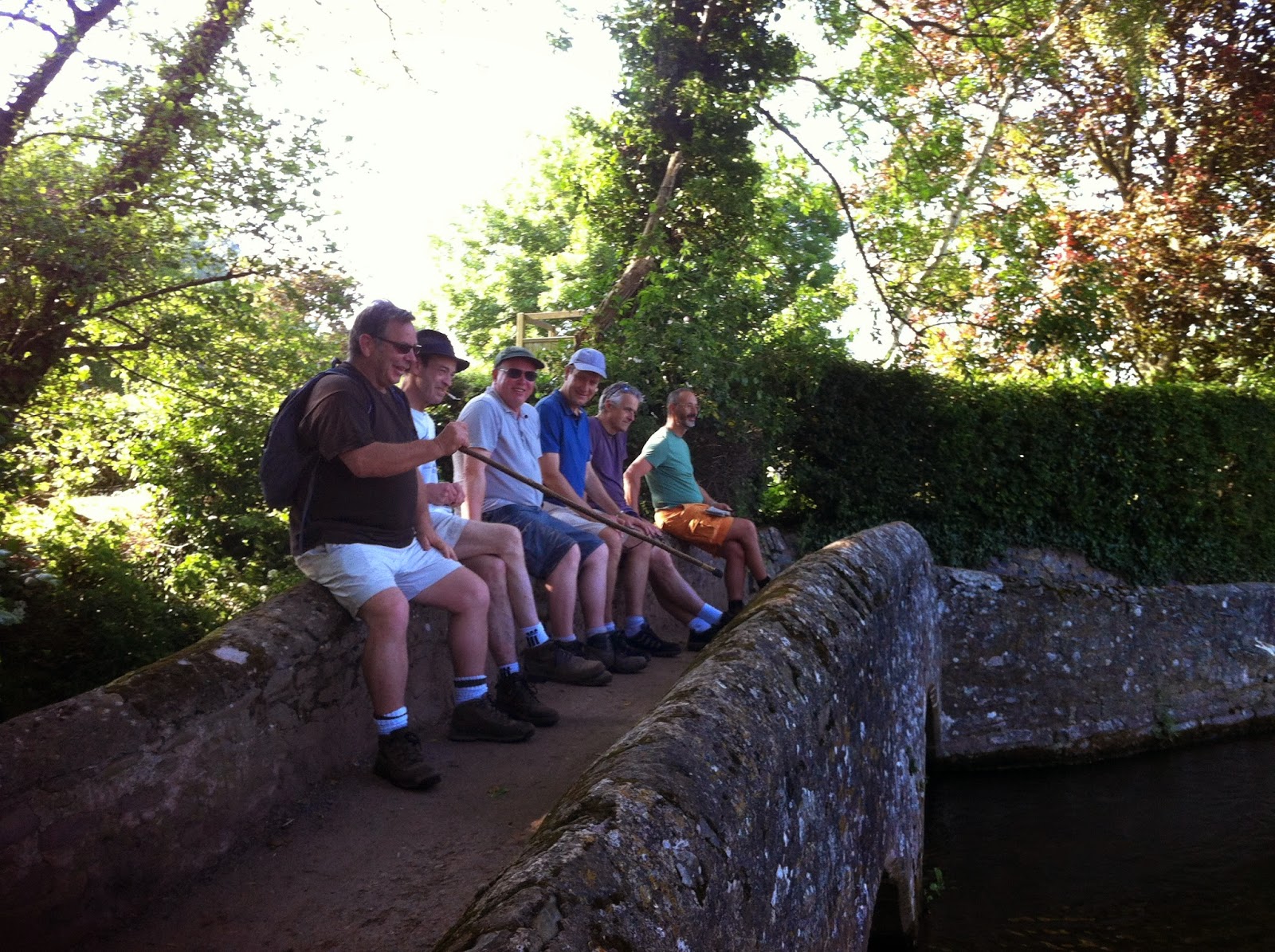 The map, despite being described as an OS Explorer map of Exmoor, was nothing of the sort, and was in fact an old 18th century hand-drafted sketchmap of Iceland.

We ate well at The Stag, with France disagreeably winning a match 5-2 in the background.  The lamb stew was excellent. Damned if I can remember much else about the evening, except that I was once again granted a single occupancy room at the Dunster Castle due to my ability to snore very close to the MH decibel level.  He and I usually have to share a bed when we're both present. The plasterwork suffers. My SO room was delicious, with a through draft and, oh, such lovely sheets (top right in pic). R had to put a female manager straight about promised free pints of stout in the morning.  Great are the burdens of Leadership 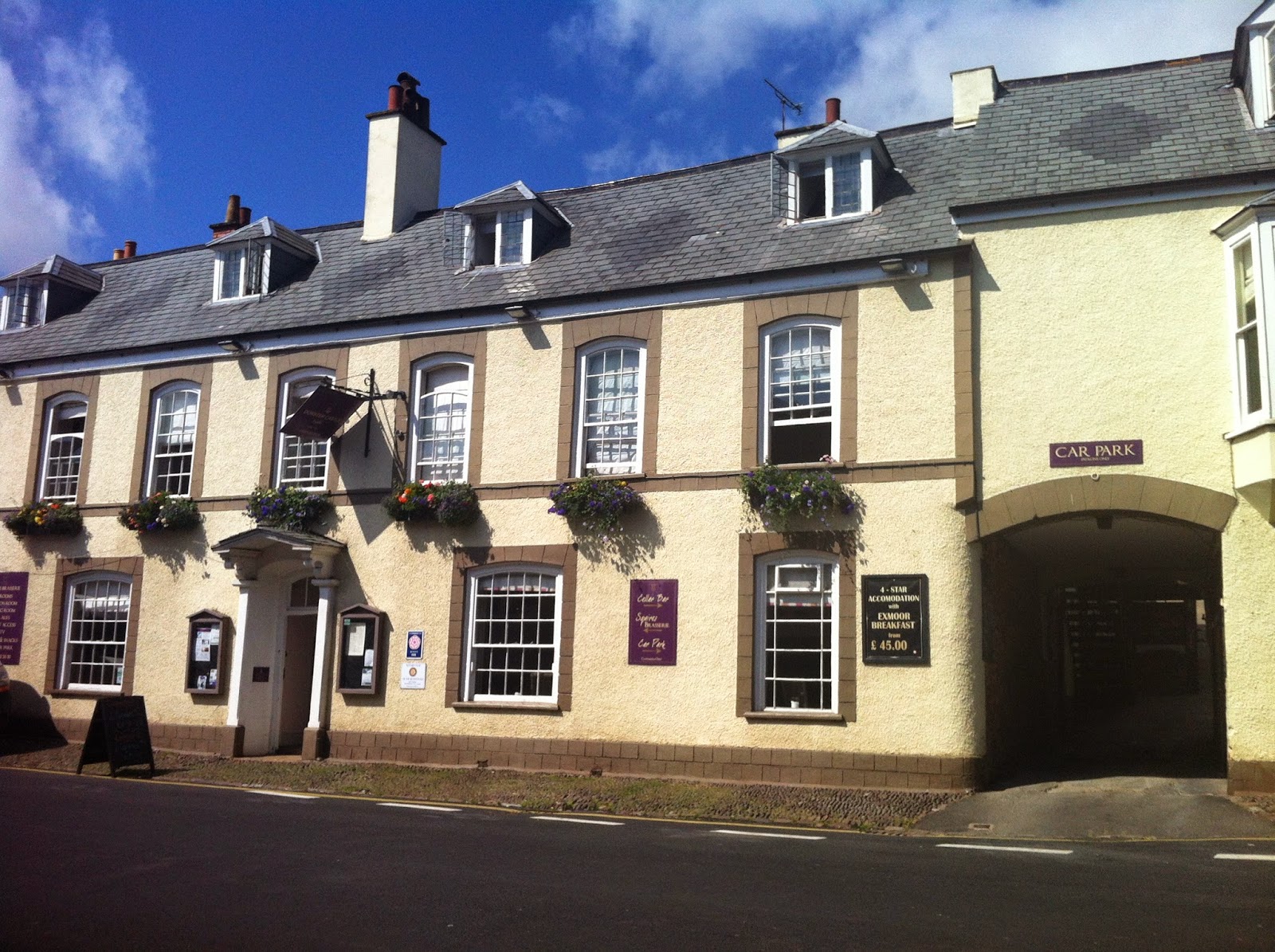 Morning brought the welcome pitiful unhappy sight of the All Blacks running England ragged.  Later on I was to suffer in the company of a drunk Welshman as the Springboks went ahead for the first time in their match against Wales in the 78th minute, courtesy of a (second) penalty try.

Dunster, as any fule kno, is the home of archery in the south west - well, it looked that way to us as we made our way cautiously behind rows and rows of targets, relievedly aware of the dead thumping sound of arrow hitting its mark.  R. seemed particularly concerned about the Health & Safety aspect of the whole business. But these guys were good.  They shot from a hundred yards at least.  Whistles blew and judges and Robin Hoods began to cross the green sward to mark their sport. From a distance, they looked not unlike a ramshackle Medieval army.

The map still providing only routes to Keflavik and surrounding areas, we split into two parties in an attempt to reach the sea from Dunster.  The main body walked down a very straight flood overflow shoot. The more intrepid flanking sortie made for the railway line, tempting death at every footfall. 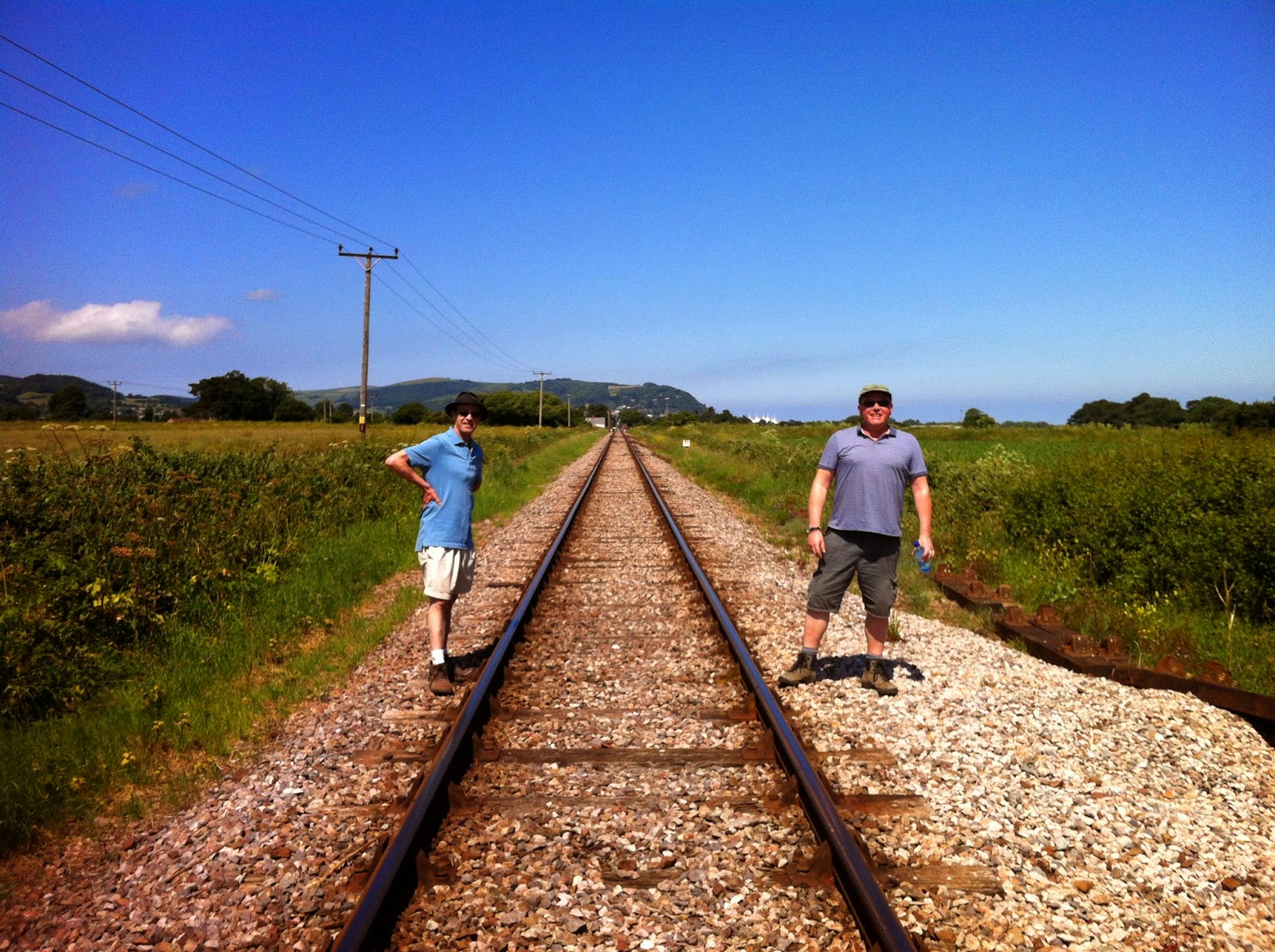 Make the sea we did:

But this was no time for shilly-shallying on the seashore.  No, there was Llantwit Major to look at across the water, and ice-cream and tea to be consumed at Blue Anchor Bay. We struck inland, heading for another White Horse, at Washford, by way of Cleeve Abbey  - well, I stood for a few seconds in the cool damp shade of the gatehouse under a latin inscription:

Gate, be thou ever open / Closed to no honest man.

It isn't that we thought £4.50 too steep, it's just that the pub was less than half a mile away and we were on a road without shade, and access to the babbling Roadwater brook would have required wire cutters, and we were damnably hot and thirsty. 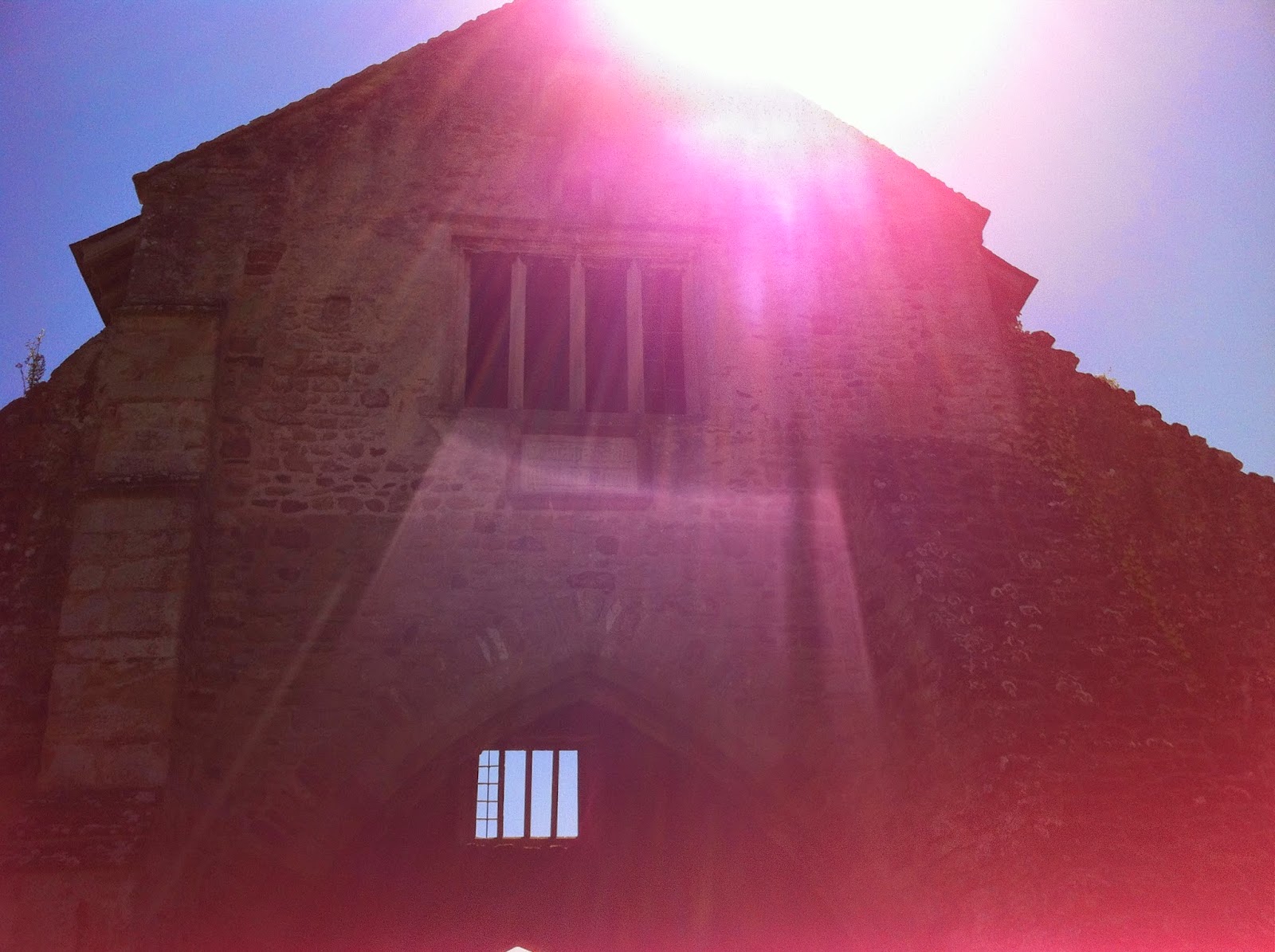 Many good things might be said of our stop at the White Horse. The cider - Rich's - was among the best we have ever had - my sandwich was good ham and mustard.  And M bathed in said babbling brook.  I regret to say that it was not a skinny dip.  Age seems to have bred a new modesty in him. And so onwards to Roadwater, by way, foolishly, of the Cider Farm, where a cider tasting was arranged.  Four ciders.  Not one among them drinkable.  Extraordinary.  Locals had warned us: "It's good as paint stripper".  Still I got a fine picture of a large owl standing next to a chap in yellow shorts holding a map of Iceland. 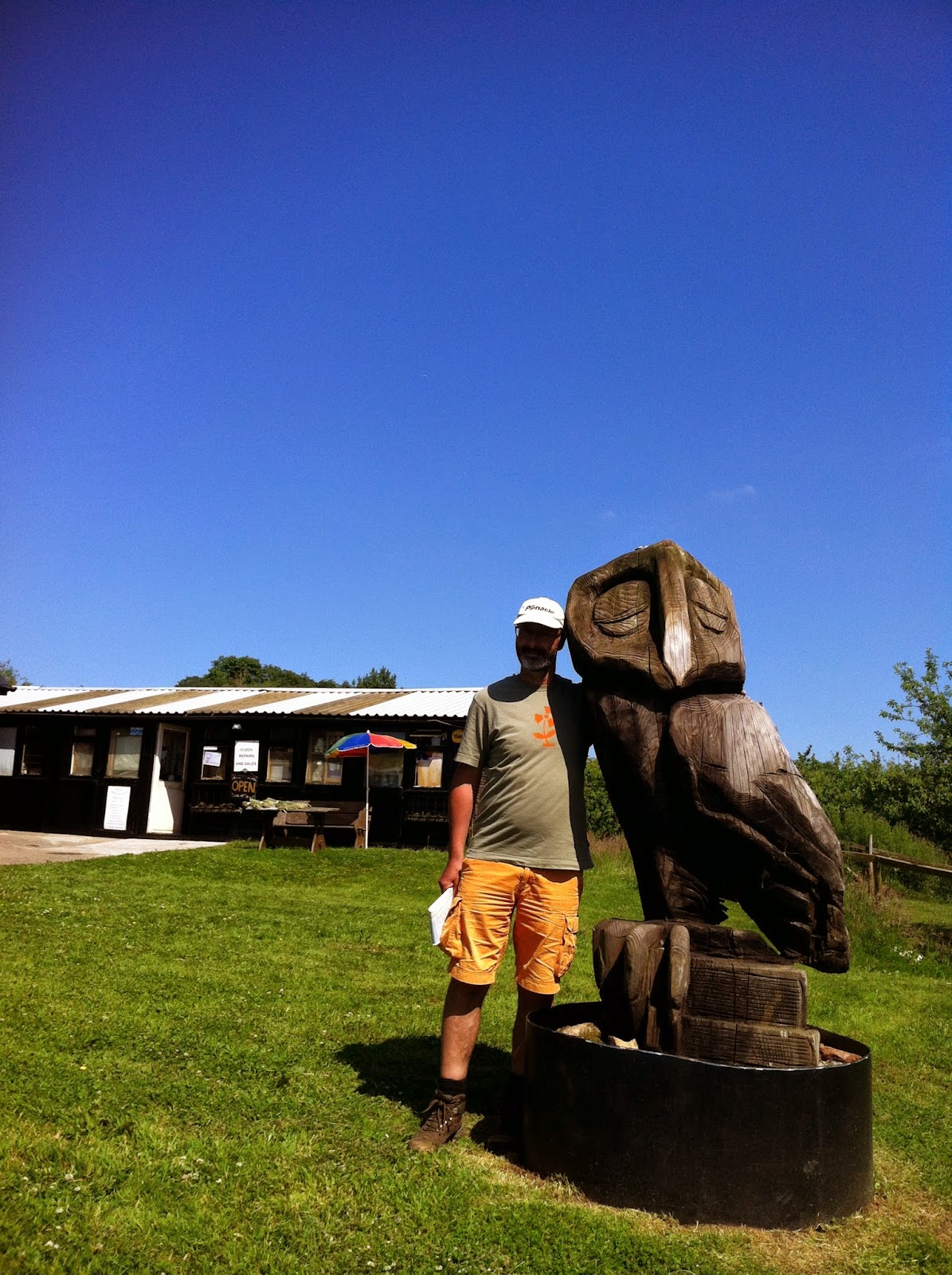 Note the cloudless sky.  There was supposed to be breeze, but in the lanes we tramped up and down, with their high hedgerows, we didn't get much.  A midge or two, though.  Or as John Clare put it:


Insects as small as dust are never done

Wi' glittering dance and reeling in the sun

We did, eventually, fall into a demi-Eden, and to celebrate the fact, we stuck our legs in the air. 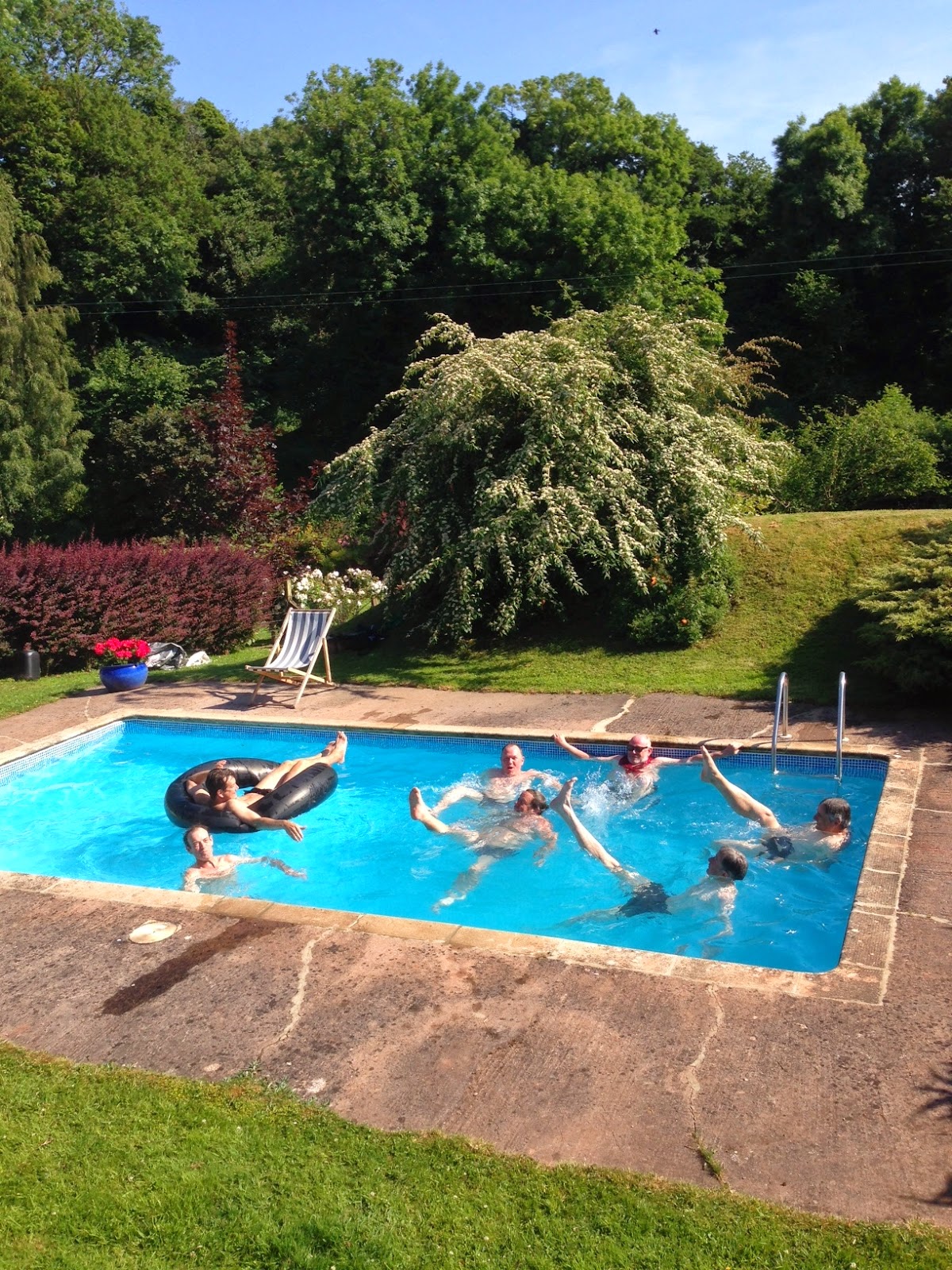 This was Wood Advent Farm. Tuscany look to your laurels. We drank ale on the terrace, played very bad croquet (I count myself the most hopeless) and quaffed chilled Valpolicella with our super-succulent pork.  The meringue for afters almost floated away on the balmy evening air. 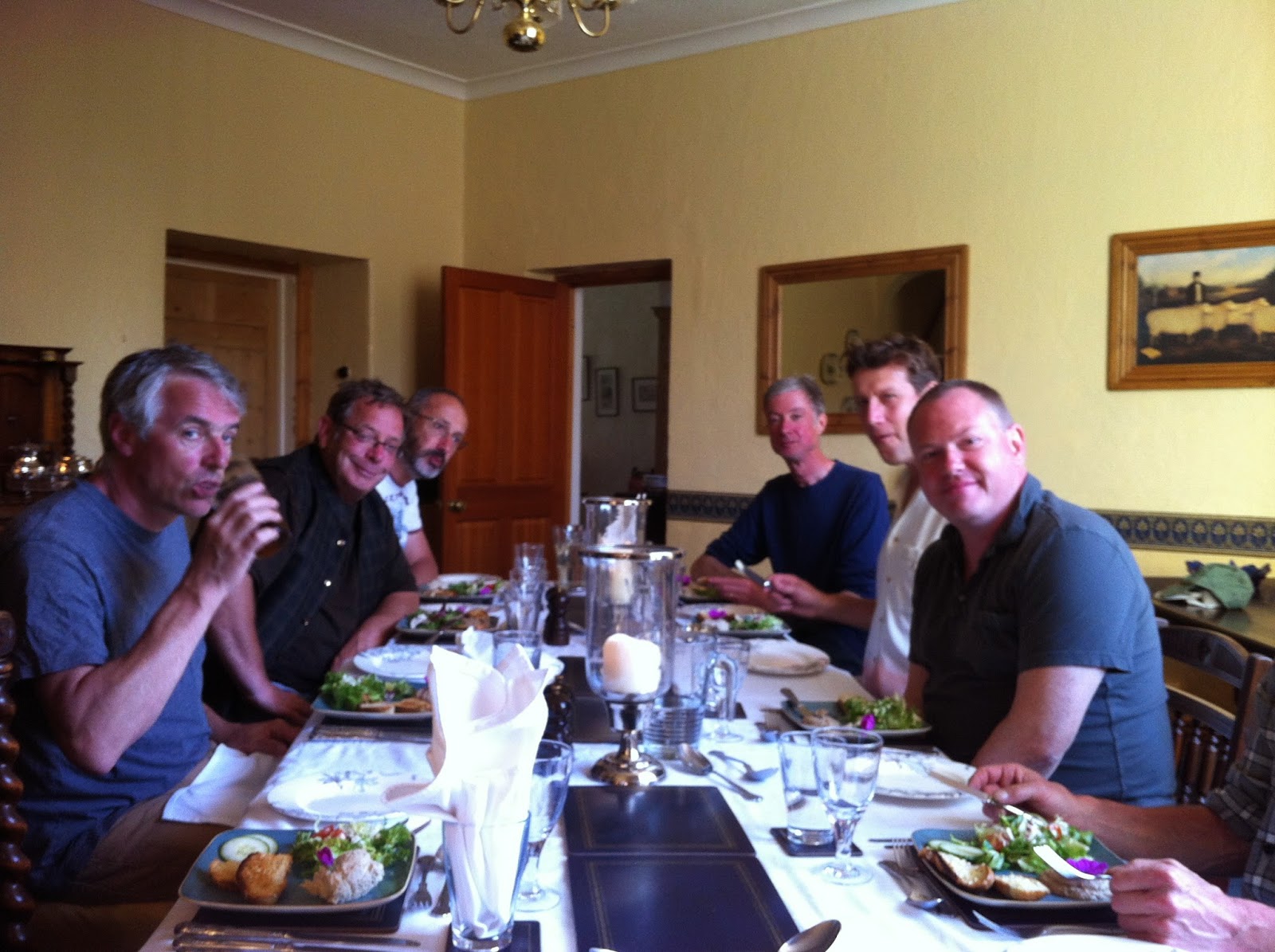 Post-prandial entertainment was The Name in the Hat Game.  I found myself having to act not only Ya Ya Toure but also Zsa Zsa Gabor. Amazed that Boutros Boutros Ghalli didn't turn up. There were two Bob Dylans, two Lulus, no Jonny Wilkinson and one Roy the Racing Car, whomsoever he may be.

We retired.  The morning broke more beautiful still.  I swam at 7.00 am and was not cold. A mighty breakfast followed.  The Sunday Times, The Observer and The Sunday Telegraph were consumed as heartily, the really tasty stuff being in the sports pages. 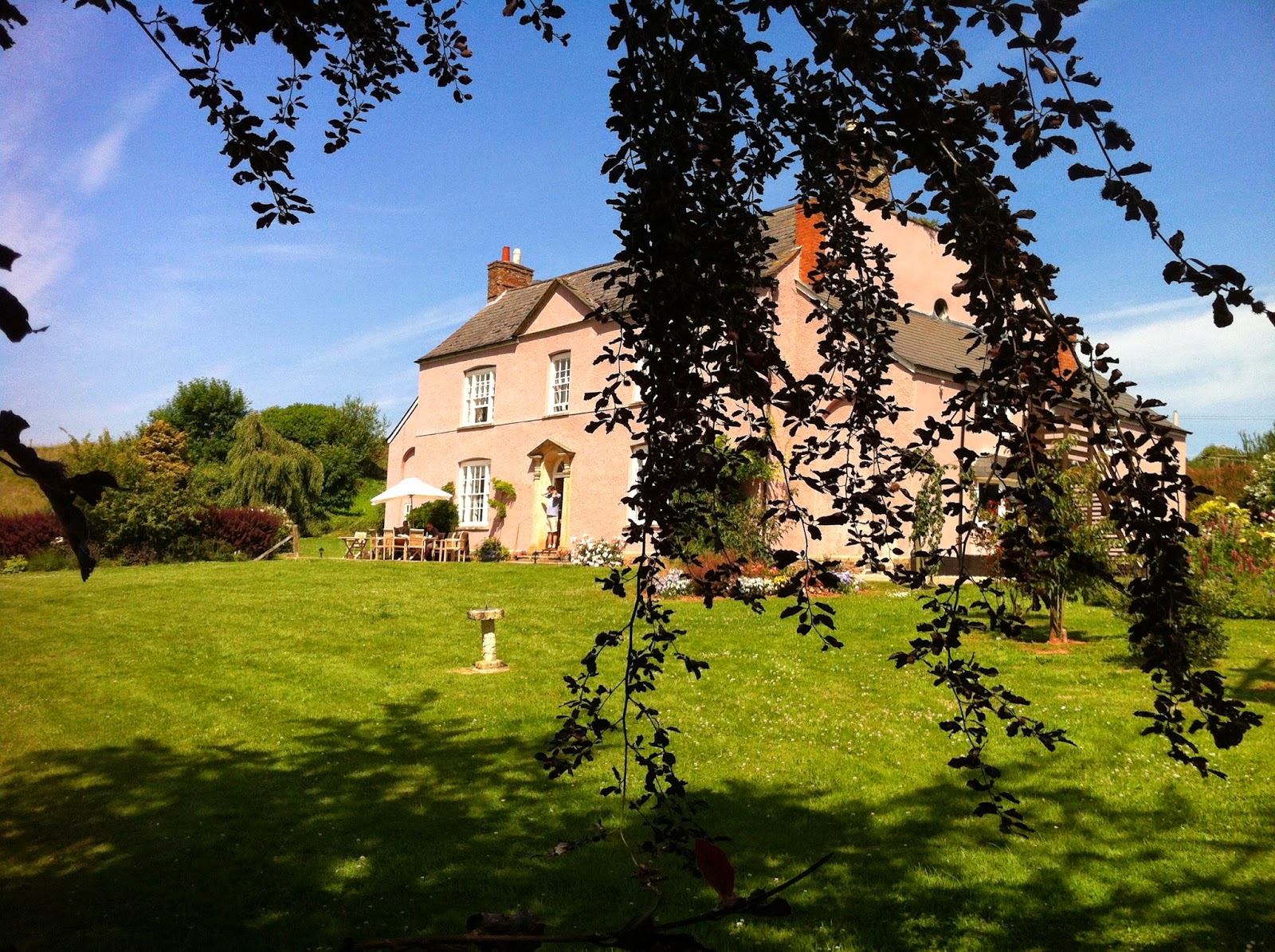 And then it was time to go home.  The May walk in June was marked not by length or indeed by anything spectacular of a natural sort (M's bathing always excepted).  England is beautiful. The dappling shadows were dark but blurry-edged.  We suffered a little in the heat and on one or two gradients, but this was a softish excursion, and the joy lay, as always firstly in the company, and secondly in the wonderful hospitality and environs of Wood Advent Farm.

Thanks are due to GO and SAF for driving the Londoners down and up, to TC for his usual contribution, to MF for wearing his boxers, to SP for his indomitable map reading and whip-handling, to AK for his wit and generosity, and above all, as ever, to RR for arranging the whole damn shooting match.  I just enjoyed myself. 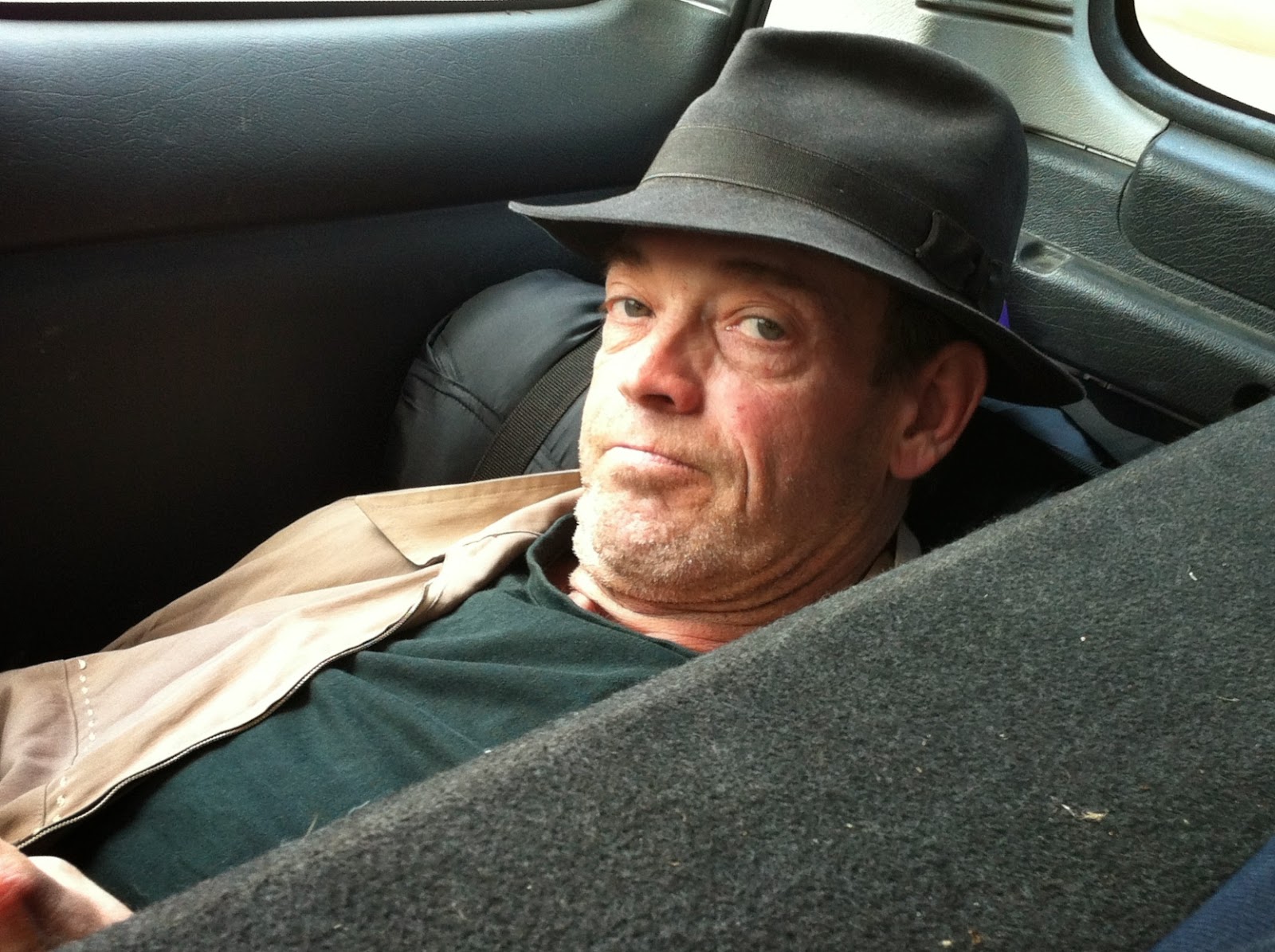