Friday - relief and delight at emphatic Welsh victory over France. Jenkins and Warburton outstanding.  Was North's try easier than Cuthbert's against Italy?

Saturday - sitting down with great friends at the Orange Tree to drink Guinness and a cheeky Grenache and to watch last gasp Scotland v Italy and magnificently intense England v Ireland.  Mike Brown terrific. Tough and lithe and willing. Great match.  Should have been a draw, but an English win suits Wales.

Sunday - Wasps Colts v Finchley 18s.  North London boys (ha!) travel west to Acton and give hosts a thumping, 34-5, a certain C. Wheldon (Full Back) scoring two tries, the first of which Mike Brown himself would have been proud, though I'm pretty sure the scorer would rather the comparison was with 'Pence'.

Spurs lost.  Twas ever thus. Wales win Spurs lose. Spurs win, Wales lose. Still, if it has to be one or t'other, much better this way round.
at 20:04 No comments:

THE COMING OF SPRING

Playing pool at the Prince Bonaparte
Was not always such a genteel pastime.
I’m not saying you were going to be knifed
Or have your gut perforated with a pool stick,
Just that you got looked at.  If you’ve been looked at
You’ll know what I mean. The smoke was good
And the stink of beer, and altogether the sense
Of usedness the place had, like an old tool.

These places are gone or going now
Because renewal is the luxury we have time and money for
And doesn’t the year do it, anyway?
Isn’t it natural? Isn’t there a happy bruise or two
Of purple crocuses on the green?
Don’t we rejoice?

Between shots I sip my merlot and wonder
Why I miss the smoke and the spilled beer
And even the being looked at, and I’m afraid
That in the good food and the new décor
And even the svelte young women, I do not rejoice.

Originally published in The Spectator, November 2011, and reproduced here now because I have spotted crocuses and snowdrops on Judges Walk

Son Thomas publishing in English.  This is just the cover of an e-book containing an essay of his entitled 'Movement and Involvement: Phenomenological Adventures in Cyberspace'. If you want the text let me know. 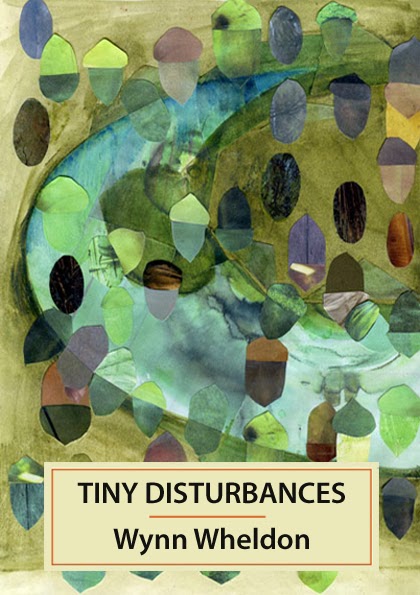 Have just received a fresh batch of my 2012 pamphlet, Tiny Disturbances. Cover by Molly Line. As no-one else is likely to do it I'm going to post some kind clippings from reviews.  If you find you are yearning for a copy, please contact me at wpw4347@hotmail.com

“[His] ability to avoid the mawkish and emphasize the meaningful is one of Wheldon’s great strengths”
Doug Van Gundy, Poetry Salzburg Review

“An agreeable collection by an accomplished poet”
Colin Will, Other Poetry

“I found I often had to stop reading, held up by something striking, a music that doesn’t announce itself, but is real.”
Chrys Salt

“I sat at the Blue Lagoon on Bristol's fashionable Gloucester Road and read the book cover to cover 3 times in 28 degree heat.”
Tony Lewis-Jones, Various Artists

THE DUCHESS OF MALFI

A new theatre.  I thought it smelled new, but actually what I could smell - pointed out to me by my niece - was beeswax burning in the very many candles that were the chief source of illumination for this production. It is a lovely, intimate theatre, the stage thrusting into the audience (which numbers around 300) but which requires most of the action to take part centre stage because otherwise those in the upper gallery lose sight of events.

In truth this was a competent, rather pedestrian go at a horrible, brilliant play, enlivened chiefly by the glowing presence of Gemma Arterton, who as well as being transfixingly beautiful is also a powerful actor.  Hers is not an easy role, requiring feistiness, piety, sweetness and cunning, but Arterton is fully up to it and the Duchess's death is a grievous blow to the production. I heard every word she said.

Which I'm afraid could not be said of Sean Gilder's Bosola, who spoke his lines too quickly and with little thought for Webster's pentameters, swallowing great chunks of the playwright's misanthropy ("Though we are eaten up with lice and worms / And though continually we bear about us / A rotten and dead body, we delight / To hide it in rich tissue" - from a scene cut, but representative.)

Bosola is the principal protagonist of the play, and the failure both of the performance and the production to recognize this is my chief grouse.

Jacobeans were made of sterner stuff than we are, because three hours on the benches of the Wanamaker was enough for my buttocks, legs and back. Perhaps this is why I clapped so energetically at the end, though I prefer to think that it was in appreciation of Gemma Arterton's performance.

Many thanks to Brendan O'Hea, who gave us a tour backstage afterwards.  So little room! And the view into the groundling pit from the stage was positively vertiginous.
at 10:00 No comments:

Today I came across the term 'conceptual writing' and wondered what it meant. Among the many descriptions and manifestoes available on the internet I came across this quote from Kenneth Goldsmith, the godfather of the school or movement or, indeed, concept.

The best thing about conceptual poetry is that it doesn't need to be read. You don't have to read it. As a matter of fact, you can write books, and you don't even have to read them. My books, for example, are unreadable. All you need to know is the concept behind them.

What I don't understand is how you find out what the "concept" is without having to read a description of said concept. If it unnecessary to read the poem or book why bother writing it in the first place?  Or producing magazines full of conceptual writing? Why not simply publish the concept? To me 'conceptual writing' seems tremendously old-fashioned and in fact rather quaint. Or am I being a frightful philistine?

PS I object to the shade of Samuel Beckett being inveigled into this.  He is always worth reading even if Kenneth Goldsmith doesn't bother (presumably having been let in on the "concept" in some mysterious way).

Of the poems I read yesterday at Triptych, this one proved the most popular.  As it happens it was also Dannie Abse's favourite from my pamphlet 'Tiny Disturbances'.  It was originally published in the ever-dependable magazine 'The Interpreter's House' (Issue 49), in 2012

THE GLOVE
for Pom

Ten of us perhaps had already passed
and it was you, my friend, with whom I walked,
who noticed first the baby rabbit
bang in the middle of the lane, on its side,
an eye open, lightly breathing, barely living.

Obviously we had to put it from its misery.
I remembered killing a broken-winged pigeon
with a shovel, how it took two whacks at least,
how something inside it refused to die
or something inside me lacked courage to kill.

But you looked about, saw a single old glove,
mangy, filthy, forgotten at the wayside,
and declared that’s what it’s there for,
took it from its yellowed plot, curled it in your palm,
and tenderly scooped up the baby rabbit,

and set it upright off the beaten track. We stared
for half a minute: no motion, but no death either.
You were sanguine: better closer to the earth,
come life or death, than exposed on the path.
I was waiting for you, so you moved first.

I was waiting because whatever sentimental
anthropomorphism I had just witnessed
seemed not that at all, but a lesson in love,
and you do not leave before your teacher.
And you may wish one day for such a glove.

Two artists whose work I especially liked, who exhibited yesterday at Triptych, where I read an occasional poem, were film-maker Victoria Salmon http://www.victoriasalmonfilms.com/  and photographer Alexander Kovy http://www.soulparabole.com/.  Do check out their websites, and in particular Victoria's 'Deryck's Hands' and Alex's project 'Elephant & Castle'.
at 11:24 No comments:

Gate Cinema / Donmar WarehouseThursday, 30 January 2014Director: Josie RourkeTalent: Tom Hiddleston, Mark Gatiss, Deborah FindlayPresent: WW, NM. RM & Caitlin LineTom Hiddleston is an electric stage presence.  This is not merely because he is a strikingly beautiful man, but also because he has grace of movement and note-perfect timing.  He speaks clearly and without affectation. There were times when, even in the cinema, I could not hear what he was saying, but I daresay this was due more to my deficient ears than his I daresay perfectly modulated voice.  Was so perfect a creature plausible as Coriolanus?  While the character is supposed to be some kind of superhero warrior, I'd rather like to see a more nuggety, less sympathetic lead.  It is hard to dislike Hiddleston. Ralph Fiennes almost pulled it off, but perhaps he too was too sympathetic.  Then again, part of the genius of the play is to make this disdainful, contemptuous, vengeful man somehow understandable.  So who knows.Mark Gatiss brought a note of lightness to what is otherwise a dark play, strolling about the stage with a languid, Mycroftian ease of possessiveness, but Deborah Findlay, for those of us who have seen the astonishing performance by Vanessa Redgrave in the Fiennes film, did not really evince the kind of ruthlessness that Shakespeare gives the character.  Volumnia is monstrous, as powerful as Lady Macbeth.So: live theatre on film?  The oddest moment was at the end when the audience found itself in a quandary: to clap or not to clap?  The last time I was in a cinema when the audience applauded (vigorously and with very good cheer) was after a showing of The Thin Man just round the corner from Harvard Square, on New Year's Eve (actually it is almost impossible not to respond, so brilliant is the last scene).  Here there was a smattering.  This will have to be worked out through the years.What film deprives you of is sweat and spit and stage blood and the whole visceral experience of theatre.  In recompense, cinema seats are comfortable, and one has a sense of being liberated from the chains of piety: too often at the theatre one is oppressed by the dictate for best behaviour.
at 10:04 No comments: