OK, so the voice has gone - it went an age ago.  Last time I saw him, at Brixton, it was too loud and Dylan spent the entire set behind a stand up piano at the back of the stage.  At least this time his piano was stage front and for some of the numbers he stood at the microphone.  He has a new wide legged stance that suggests too much horse riding or perhaps a nappy,  He moves his weight from leg to leg.  He has always had this physical quality, something fascinating in the way he moves.  It is even there in Pat Garrett.

The songs: the new ones sound much better than the old.  For a start they don't disappoint, being pretty faithful to the studio recordings.  Having said that, the stand out song, 'Forgetful Heart' was punctuated by some absolutely immaculate harmonica, which the song doesn't have on the album ('Together Through Life').  And of course the new songs have been written for the broken voice..  The band - petty much as always - was as tight as a button, and had no problem with the stylistically eclectic nature of the set.  And Bob was Bob.  I hated Brixton - swore never to go again.  Loved this.
at 01:48 No comments: Links to this post

Just absolutely bloody marvellous.
at 16:42 No comments: Links to this post

A great new video for the Citizen Kane of singles: http://video.bobdylan.com/desktop.html
This applies a technique similar to the one  Dylan uses in the 'Revisionist Art' screen prints in the basement of the 'Mood Swings' show at the Halcyon Gallery.

Probably the best thing he's done since Time Out of Mind. A) These iron works are handsome, good-looking, OK beautiful, B) They are practical. They're gates. C) They are funny. "Got a meat grinder on my gate".  Absolutely loved this exhibition.  And laughed out loud at the 'revised' front covers in the basement. 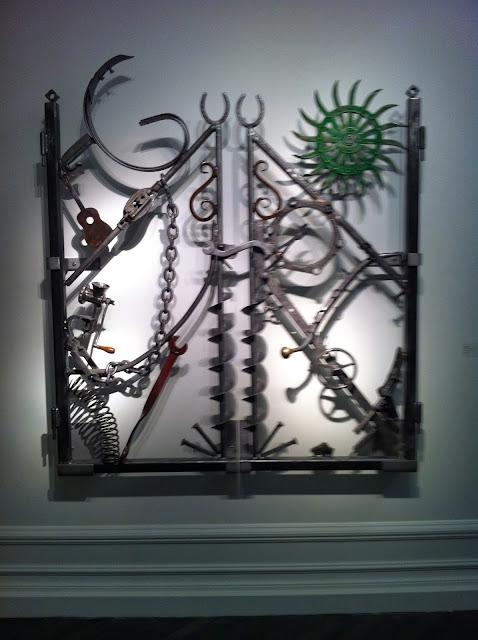 Wanted also to say that these gates, not unlike 'Chronicles, Vol 1' are throughly characteristic: a gallimaufry of disparate objects ever so slightly related, bound together within one very precise form. In them you can, as it were, see Einstein disguised as Robin Hood and Shakespeare talking to some French girls and child sacrifice being prepared on Highway 61.
at 21:24 No comments: Links to this post

What to say about Ghosts? Well, for a start, if you are used to Shakespeare, it is short. It takes place on one night - during which an incredible amount happens, including an orphanage burning down and an assisted suicide.  Regular Scandinavian type stuff in other words. At least by the end it has stopped raining.

It is not hard to imagine the electric effect this play must have had when first produced.  There are plenty of folk about even today who would be shocked by it - certainly anyone with a belief in a god of any sort.  Can't imagine it going down that well in, say, Tehran.  And it is quite exhausting to watch, as Helene Alving, in a performance by Lesley Manville which will win all the awards, reveals and has revealed unto terrible secret after secret, the 'ghosts' of her deceased husband and his mistresses doing their business bit by bit. Spouse exited saying she couldn't imagine how they performed it every night. Tickets cost £8.00.  Tickets for the woeful Much Ado at the Old Vic cost £55.00, so Ghosts was as much a bargain as Redgrave & Darth & Rylance were a rip-off.
at 16:15 No comments: Links to this post

Here is a letter that appeared in September's issue of Acumen:

Dear Acumen
It was wonderful seeing the article about Rilke in A76.  When I was nonteen and a plain-clothes security officer at Butlin's in North Wales, there was a chef in the next room.  He'd spotted me reading novels and one day he said, 'Why don't you try reading this,' and handed me a copy of Rilke's poems.  I've still got it.  It was one of those moments.  The hair on my neck prickled.
Terry Quinn
Preston

I wrote to Terry to ask permission to reproduce the letter here.  It turned out that the memory dates back to 1970, when I would have been on holiday, down the coast at Criccieth.  Butlin's was on the way to Pwllheli, where I used to go to the barber's (sitting on several telephone directories).  Terry had been 19 at the time.  My father, at 17 (in 1933), was in Germany, where he learned several Rilke poems by heart, in German.  Terry sent me a poem he wrote after going back to Pwllheli years later.  It has a rather wonderful melancholic rhythm to it.  Here it is:

I write a letter to Millie
safe in the knowledge
that she won’t write back.
It’s not important stuff,
and I know she’s moved away,
most likely many times.
Thirty stamps for Finland,
an address that hasn’t changed,
far enough, but not enough,
to know that I shouldn’t return
and that means today and this station
the noise of the train fades away,
I’m standing in tears of sunlight and years
and the lane to the road from Pwllheli
where last night a movie was funny,
the same Picture House where we’d met,
the pub where we both drank Guinness,
I was there and I couldn’t forget.
But in Criccieth I can’t find the café,
the platform’s dirty and sad,
the Porthmadog hotel has changed its name,
and worse, it’s not the hotel.
The streets didn’t meet at that corner,
where is the path to the sea,
it wasn’t this far to the bus stop
and I’ve run out of memory.
I wish I could write to Millie
and ask did I say what I said,
did I feel what I felt or say what I felt,
I’m beginning to think it’s all wrong.
So I’m not going to go to Beddgelert,
my youth can stay where we were,
but I’ll still write a letter to Millie
now I know why she won’t write back.

And just for good measure, here's a bit of Rilke.  We had plenty of sea breeze in North Wales.

Song Of The Sea(Capri, Piccola Marina)

Timeless sea breezes,
sea-wind of the night:
you come for no one;
if someone should wake,
he must be prepared
how to survive you.
Timeless sea breezes,
that for aeons have
blown ancient rocks,
you are purest space
coming from afar...
Oh, how a fruit-bearing
fig tree feels your coming
high up in the moonlight. 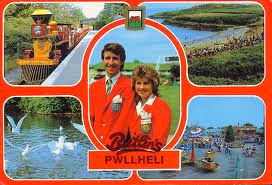 Books of the Year

My choice, here: http://www.spectator.co.uk/books/books-feature/9076421/books-of-the-year-13/ Lots of others I could have mentioned: The Stranger's Child (Hollinghurst - big and chunky intelligent family saga), Harvest (Crace - not his best, but still mysterious and page-turning), The Wasp Factory (Banks - creepy Lord of the Flies-y stuff, very well done) - three thrillers by Robert Crais (my supersub for Robert B. Parker), Julian Barnes's Levels of Life - and the one I should have included, Country Boy by Richard Hillyer, a reissue of an old book describing life in a village in Bucks before the first war.
at 13:35 No comments: Links to this post

Three Poems by Me

Three poems by me published in Spring this year by the unspeakably brilliant Poetry Review Salzburg, to which all poetry lovers should subscribe. Find out more about it here and here.

Black as new asphalt
Smooth as an earlobe
Round as a pill
Given for courage
Kept in the pocket
Held in the palm
An ember of love
In the chill of the church.


JIM CLARK (ACROSS THE HALL)

The boy runs from the room with awful news,
awful thrilling news: a hero is dead.
“Jim Clark is dead,” he tells his mother
who is doing something in the kitchen.
He has dashed across the hall, and now
decades later only that moment remains:
you can see him fly from the green study
where all the books are, across the hall,
and disappear into the kitchen. The rest
you must imagine: the breaking of the news,
the telling of the news. Grey school shorts
flash across the hall.
But it was a Sunday.
And all at once history flattens into lie
the only truth remaining our mortality.

Note:
Jim Clark, considered among the very greatest racing drivers,
was killed in an accident in Germany in 1968

Richard Burton, the author of a well received biography of the poet Basil Bunting, took exception to my own, generally positive, review in The Spectator. In my opinion, for the general reader the book is far too long and I think it was poorly edited. However, it is quite clearly a labour of love, and I cannot imagine - as I think I said in the review - that it will be regarded as anything other than the definitive reference work.

You can find Richard Burton's fairly justified rebuttal of the particular evidence I used here.
at 22:43 No comments: Links to this post

Email ThisBlogThis!Share to TwitterShare to FacebookShare to Pinterest
Labels: A Strong Song Tows Us, Basil Bunting, Richard Burton, The Spectator


A still parade of stone tablets,
White as aspirin under the bland
Wash of an August sky, they stand
In exact battalions, their shoulders square.

I move slowly along the lines
Like a visiting Commander
Noting each rank, name and number
And that a few are without names.

All have been efficiently drilled,
They do not blink or shift beneath
My inspection; they do not breathe
Or sway in the hot summer air.

The warmth is sick with too much scent
And thick as ointment. Flowers hurt,
Their sweetness fed with dirt,
Breathing in the dark earth underneath.

Outside the cemetery walls
The children play; their shouts are thrown
High in the air, burst and come down
In shrapnel softer than summer rain.


Ranville was the first village to be liberated in France when the bridge over the Caen Canal was captured intact in the early hours of 6 June by troops of the 6th Airborne Division, who were landed nearby by parachute and glider. Many of the division's casualties are buried in Ranville War Cemetery and the adjoining churchyard.  My father was awarded the Military Cross for his part in the battle for the village, after his company came under unexpectedly heavy fire from German artillery.