This may well be my favourite ad of all time. The dancers are Wolfgang Mwanje and Emma Atkins


There’s a famous video on YouTube:
A man chasing a dog that’s chasing deer
In Richmond Park. He’s yelling “Fenton, stop”.
That man’s father, it turns out, was admired
In her youth by the late Prime Minister
Mrs Margaret Thatcher, and this, it seems
To me, is the kind of juxtaposition
To which poets ought to be attending.

I hope that explains what I’m up to here
Although the truth is I’m somewhat unsure
Of what I can do with this interesting
Meshing of the public and the private
Other than to speculate as to what
Might have happened to history had she
Been admired in return. Would the Falklands
Still be British or Fenton be so free?

This is a poem I would never submit for publication, but which, nevertheless, I rather like.
at 13:07 No comments: Links to this post

LEVELS OF LIFE by Julian Barnes

Not sure quite what I had expected.  Someone once said to me that they always felt they had somehow missed the point when reading Julian Barnes, and I think I agreed.  Levels of Life is a good book, split, on the surface, into three essays - or perhaps 'pieces of writing' is closer.  The first two, which concern Nadar and the birth of aerial photography in the first and the affair of aeronaut Fred Burnaby and Sarah Bernhardt in the second provide the metaphorical lexicon with which Barnes describes the nature of his grief at the death of his wife, Pat Kavanagh.  Perhaps a tad - forgiveably - disingenuously, he writes that "only the old words would do", because here he is finding a new way to describe an old "banal and unique" thing.  Which is one of the things good writers are impelled to do: find new words for old thoughts and feelings.  The poetry of grief is rich, and Levels of Life has the richness of poetry - one almost yearns for it all to be written on one page, with wide margins and that Faber font.
at 23:20 No comments: Links to this post 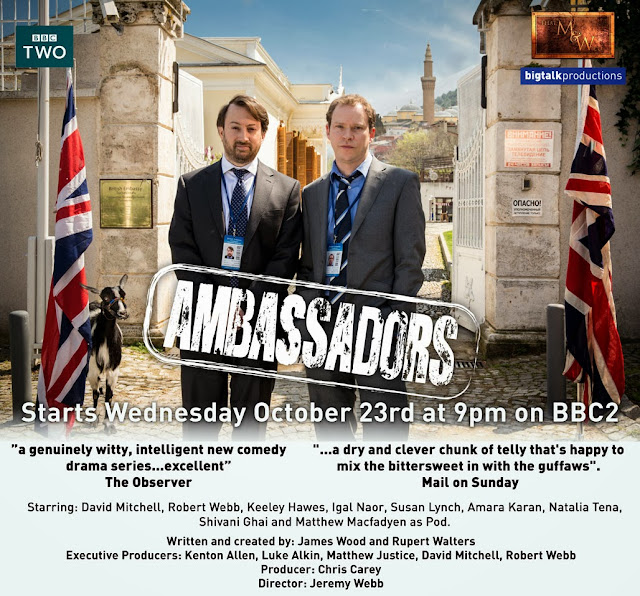 Tune in - co-written by Shakespeare Club pal, Rupert Walters.  Bound to be delectable.
at 19:48 No comments: Links to this post

Photo taken while driving to a dinner party on Saturday evening.  Wife complains I take random phtos so I can put them online.  She is quite right.  Obviously, this is just a detail, but i rather like the smudgy effect. 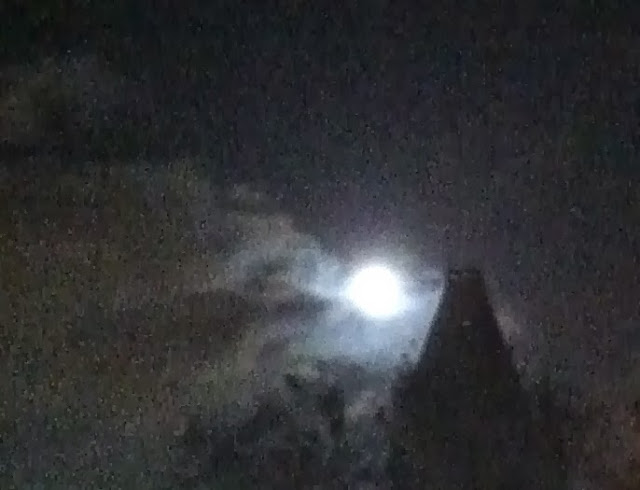 To Frieze.  AS usual the contemporary stuff left me fairly cold - it always seems so desperately in search of the novel.  There is also a degree of sensory overload that makes it difficult to see things in isolation.  What is disappointing is that there isn't much funny stuff - quite often funny stuff is not supposed to be funny, it is supposed to be terrifically earnest.  Earnestness can, of course, be very funny.  But not much of that in evidence, although I did smile at four girls covered in what looked like a large principal's gown or perhaps a principal's large gown. Frieze Projects certainly worth a look.  Battleships thing was easily my favourite bit of art in this tent.

Frieze Masters was an altogether different thing.  As my niece said on entering, "Ah, this is the grown-up art".  Wonderfully eclectic bunch of stuff.  I didn't bother looking at the artists' names or the titles of the pictures, but simply enjoyed the images.  Some things are fairly obvious: Picasso is recognizable, but there were a couple of very early Lucien Freuds, one a boat on a beach that i particularly liked.  Anyway, here are three items, photographed randomly.


Food and drink and general chill-out area, run by Rochelle Canteen, was, as usual, superb.
at 01:52 No comments: Links to this post

Anne Teresa de Keersmaeker’s “Rosas Danst Rosas,” which she created in 1983 for her new four-woman company, has been replicated by more than 1,500 people all over the world, as part of a project to celebrate the work’s 30th anniversary.

A line from The Proclaimers song, 'Sunshine on Leith' has skewered me since I saw Jane Horrocks delivering it in the film that takes its name from the song. This is the line.

My eyes prick with tears every time I hear it (and I've played it over and over). I think the rhetorical power of the line, other than in that simple rhyme, is the use of the word 'room' instead of 'place'.  It is both more concrete an image and a more modest one, suggesting not a natural right but an earned reward.  It suggests both humility and a proper pride. Pretty darned rare in modern pop. It certainly fails to match Katy Perry's "I went from zero to hero", as an example of unashamed narcissism.

This week I heard it suggested that 'Filth' was a more realistic film than 'Sunshine on Leith'.  Neither is terrifically realistic (is any film?) but of the two the latter undoubtedly accords more closely with the quotidian than does the former.  More people have taken part in a sing-song in a pub than have had chips and cocaine for breakfast, whatever Goth romantics think.  Adultery is a good deal more common than murder. There are more good soldiers than bad cops.
at 00:06 No comments: Links to this post 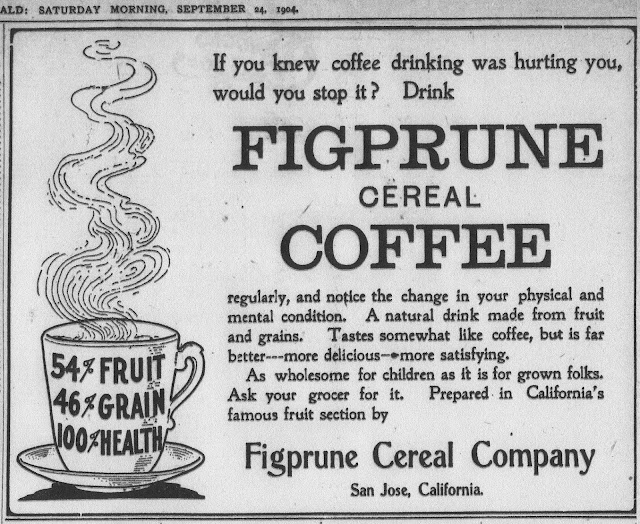 With the news that a movie is to be made of Sam Munson's novel, The November Criminals, I give you below the review I wrote on Amazon when the book was published in 2010.

To begin with, you think you are in one of those novels by young men that describe the debauched life they lead as though it was interesting. Sex, drugs and rock and roll. Certainly there are drugs, weed, here, in fact importantly so. But there is no graphic sex and no unworthiness before the great god Rock. In fact this is a rather high brow book, dense, intellectual, even difficult.

The voice is Catcher in the Rye conversational, the conceit being that the book is an essay written for the benefit of the University of Chicago selection board, describing the narrator's best and worst qualities. Addison Schacht, brought up by his oafish but good-natured artist father, sells dope to his high school fellows and is fluent in Latin, with a special love for the Aeniad.

The story of the book, such as it is, recounts Addison's amateurish attempts to discover the murderer of a classmate, Kevin Broadus. Addison fails utterly but in so doing recreates himself, emerging a sadder but wiser man, one who can, at eighteen years old, not only smoke, but buy cigarettes, not only love but admit to loving, his girlfriend, the intriguing Digger.

Kevin Broadus, a saxophonist in the school band, attracts Addison's attention when, in a class about Music and Its Relation to African American Literature Broadus, an African American, does "not particularly" agree with the notion, put forward by the teacher, that African American literature is less constrained than other literatures. This is the only thing Addison remembers Kevin saying in class, ever, but before he can congratulate him Broadus is murdered.

`The November Criminals', as I learned it, was a phrase given to the Germans who surrendered at the end of the First World War and who subsequently accepted the Versailles treaty. I don't know whether it was Hitler's own phrase but it could have been. So: traitors (but, from our point of view, surely, good traitors). If you know this before you start you spend much of the book wondering about its title. The explanation, when it comes, is not entirely clear, but I think that what Addison is struggling to say is that we are all of us traitors to an ideal notion we have of how things should be. Or something. (Addison loves his italics and his 'ors' and 'whatevers').

But perhaps his point is more specifically about contemporary America. Addison certainly has very little time for multicultural orthodoxy, the central tenet of which is: "we're all still racists today". Addison regards this as mere gesture; indeed, in its extended meaning he regards it, as exemplified by Black History Month, say, as "the ultimate fantasy of a slave owner". For his part he, a Jew, collects Holocaust jokes. It is impossible to read this other than as an act of defiance that proclaims THIS IS HOW THE WORLD IS - BE TRUTHFUL.

The November Criminals is a superior work of fiction, written with authority and verve. It is occasionally very funny. Chicago would have been foolish not to accept Addison Schacht.

It isn't about godfathers or the falsely imprisoned or a newspaper magnate, and it isn't set in a galaxy far far away or on an ill-fated ocean liner or during a revolution.  It's about two squaddies returning to Edinburgh from Afghanistan and the viccissitudes of their subsequent love lives.  So before you decide to give it a miss on account of its being a "jukebox musical", just have a think about the last few movies you've seen.  Nobody here is having a nervous breakdown or driving cars at 180 miles per hour or disappearing down a lavatory bowl.  These are plum 'ordinary' people brought to life by a decent script, great songs, a beautifully shot location and terrific acting (especially from Peter Mullen and Jane Horrocks, who provide the ballast that keeps the movie attached to the ground),  It is sentimental and uplifting and, well, joyful. At the same time I defy anyone to show me a more magical and moving couple of minutes of cinema this year than those taken up by Jane Horrocks singing the title song.  Just heartbreakingly lovely.  If you go and see it and don't like it, then you're either too clever or too dim or just jolly sad. The director is Dexter Fletcher, who although apparently 68 years old, still looks like he is 14.  His first film, 'Wild Bill' is also very well worth a watch.  He's a heart warmer is what he is...

Should anyone happen to be in Covent Garden around 7.30 on 16th October, there is an opportunity to attend a Stanza Bonanza at the Poetry Cafe, with readings (8 mins per poet) from 12 poets from Brondesbury and Woking.  For the purposes of this gig I am from Brondesbury and I think I am on first.  And there is a bar.

Further details: http://www.poetrysociety.org.uk/events/event/2443
at 18:56 No comments: Links to this post