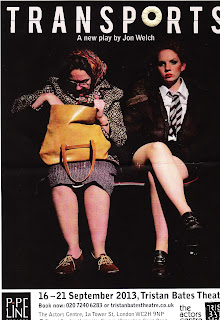 Back from 'Transports', playing at the Tristan Bates Theatre in the Actors Centre in Covent Garden.

I went out of piety and friendship. It is designed and con-conceived by an old friend, Alan Munden.  His wife Jude is responsible for the costumes.  Their daughter Anna is one of the two stars in a moving, immaculately written, designed and acted piece that deserves as much attention as it can get.

Fringe theatre is so often merely goodish or the product of enthusiasm or youthful ambition (and sometimes all three) that one's expectations are never that high, but it was clear as soon as we entered the Trsitan Bates' tiny auditorium that we were in the hands of grown-ups.

The design is immediately striking, two tracks of rail that work through the evening as shelving, climbing frame, and constant reminder of the place where the play comes from.  Railtracks ran into Auschwitz but they also ran towards England.

John Welch's play, precisely plotted, tells two stories of abandoned teenagers. Anna Munden plays both of them, one a Jewish refugee, Liesl, who comes to England by way of the Kindertransport, the other a foster girl, Dinah, taken on by Liesl 34 years later (the older Liesl played by Juliet Welch).  The two girls are very different but there are parallels between their stories, never too heavily drawn, which give coherence to the drama.

There are no longeurs in this play.  This is due to the writing, of course, but also to the performances, which are never less than utterly authoritative.  The two women, in the modern parlance, own the stage.

A word too about the direction, which is unfussy, assured and benefits from very good lighting.

As I say, I went out of piety and friendship, but had my piety and friendship well and truly stuffed back down my condescending throat.  This was top notch theatre: funny in parts, but terrifically moving mostly.  As with About Time last night, I found myself weeping, and oddly one of the messages of Transports was the message I identified as being at the heart of Curtis's film: love begets love.