Two movies in two days.  What madness. Spouse and self used to go and see every new Woody Allen movie until they stopped distributing them.  If we only saw one movie a year, it would be a Woody. Saw Blue Jasmine with Woody-fan son.  He liked it a lot.  I was, to be honest, slightly underwhelmed, chiefly because I'd been expecting more laughs.  This was drama with occasional chuckles, not a comedy. Perhaps, paradoxically, the problem was with the strength of Cate Blanchett's performance.  It was difficult to laugh at or with someone so broken and self-deluding.  And of course the other thing is that it kept on being not A Streetcar Named Desire.

Rush, on the other, hand, was a blast, and not just of high octane fuel, but of intelligence and sharp film-making.  Neither wholly likeable, nor wholly unlikeable (and I imagine racing car drivers are like novelists, hugely egotistical) Hunt and Lauda were constantly interesting characters criss-crossing their way through the narrative, reflecting each other's massive need to win. Hunt needed to win to be happy.  For Lauda "happiness was the enemy".  Along with all the boy's own stuff, there were genuinely touching portraits of the drivers' love lives.  It was impossible not to feel the pain and worry of Lauda's wife as her husband raced, crashed and had his lungs hoovered.

But I suppose, in the end, this was an old fashioned tale of two rival gladiators, with very different attitudes but a growing mutual respect (the real arc of the story). Highly recommended.
at 23:25 No comments:

MUCH ADO ABOUT NOTHING

Danny Le Wynter as Don John made me laugh twice. Beth Cooke as Hero was game. There are no other positives.

The set was, well, it was brown, which is to say it featured a large brown ‘arch’ in the shape of a table, and a brown backdrop.  There were two or three chairs and a wind up gramophone. There was altogether far too much business – people walking about at the back of the stage carrying chairs or sweeping up or lingering at the side having animated pretend conversations.  The only real laughs of the evening were provoked by the antics of a gardener dancing to a woefully performed slow blues.  I couldn’t watch myself, for embarrassment at the ineptitude of that particular performance.  The supporting cast – and Much Ado is distinguished by its number of fully-drawn minor characters – I suppose did their best, but they were up against it. Redgrave and James Earl Jones were very poor indeed.

This was the indulging of a whim: “This production was born from the idea of Benedick and Beatrice being played by James Earl Jones and Vanessa Redgrave” writes Mark Rylance in the programme.   No Shakespeare play can afford to be approached whimsically, not even the funniest of his comedies (which I believe this to be).  This was an insult to the audience.  Neither of the principals could be heard.  Redgrave is, in the end, a movie actress; she simply does not have the power or the presence of, say, Judi Dench (who would have laughed Rylance’s idea out of court).  I couldn’t hear a word she said.  Couldn’t hear him either, except for “the world must be peopled”.  Not by these two (there was a titter from the stalls). Many members of the audience (I’m sure I was not the only one) must have spent much of the time wondering whether James Earl Jones would last out a scene let alone an act or the play.  In one early moment it took an age for him to sling a leg over the arm of the chair and all one could think about once he had managed it was how very uncomfortable the old man must be.

Much Ado is about young love.  It is a play full of energy and quick wit. Rylance has managed to render it moribund and dull.  Quite a feat.

To add insult to insult the programme contains an essay, fatuously entitled ‘The Burning Question’, on “the authorship debate”.  There is no debate among serious scholars, and it is certainly not a “burning question”, except perhaps for those who do not take the plays seriously (as evidenced in this present production – Mark Rylance and Vanessa Redgrave both doubt the ability of William Shakespeare to have written them.)

That’s my first love sitting sipping tea
in her parents’ garden, smiling at me.
Around her neck she wears a violet scarf.
Her frock is virgin white; and you may laugh
but the symbols were rich for me. I thought
we might discover sex together, bought
her Lawrence stories, marked out for her one
in which the heroine is penetrated by the sun.
To no avail.  I failed to win her round
and she gave herself to someone sound,
someone certainly with better looks
who did not euphemise desire with books.

It may be supposed that the diverse idioms of utterance which make up current human intercourse have some meeting-place and compose a manifold of some sort. And, as I understand it, the image of this meeting-place is not an inquiry or an argument, but a conversation.

In a conversation the participants are not engaged in an inquiry or a debate; there is no 'truth' to be discovered, no proposition to be proved, no conclusion sought. They are not concerned to inform, to persuade, or to refute one another, and therefore the cogency of their utterances does not depend upon their all speaking in the same idiom; they may differ without disagreeing. Of course, a conversation may have passages of argument and a speaker is not forbidden to be demonstrative; but reasoning is neither sovereign nor alone, and the conversation itself does not compose an argument. . . . In conversation, 'facts' appear only to be resolved once more into the possibilities from which they were made; 'certainties' are shown to be combustible, not by being brought in contact with other 'certainties' or with doubts, but by being kindled by the presence of ideas of another order; approximations are revealed between notions normally remote from one another. Thoughts of different species take wing and play round one another, responding to each other's movements and provoking one another to fresh exertions. Nobody asks where they have come from or on what authority they are present; nobody cares what will become of them when they have played their part. There is no symposiarch or arbiter, not even a doorkeeper to examine credentials. Every entrant is taken at its face-value and everything is permitted which can get itself accepted into the flow of speculation. And voices which speak in conversation do not compose a hierarchy. Conversation is not an enterprise designed to yield an extrinsic profit, a contest where a winner gets a prize, not is it an activity of exegesis; it is an unrehearsed intellectual adventure. It is with conversation as with gambling, its significance lies neither in winning nor in losing, but in wagering. Properly speaking, it is impossible in the absence of a diversity of voices: in it different universes of discourse meet, acknowledge each other and enjoy an oblique relationship which neither requires nor forecasts their being assimilated to one another.

This, I believe, is the appropriate image of human intercourse, appropriate because it recognizes the qualities, the diversities, and the proper relationships of human utterances. As civilized human beings, we are the inheritors, neither of an inquiry about ourselves and the world, nor of an accumulating body of information, but of a conversation, begun in the primeval forests and extended and made more articulate in the course of centuries. It is a conversation which goes on both in public and within each of ourselves. Of course there is argument and inquiry and information, but wherever these are profitable they are to be recognized as passages in this conversation, and perhaps they are not the most captivating of the passages. It is the ability to participate in this conversation, and not the ability to reason cogently, to make discoveries about the world, or to contrive a better world, which distinguishes the human being from the animal and the civilized man from the barbarian. Indeed, it seems not improbable that it was the engagement in this conversation (where talk is without a conclusion) that gave us our present appearance, man being descended from a race of apes who sat in talk so long and so late that they wore out their tails. Education, properly speaking, is an initiation into the skill and partnership of this conversation in which we learn to recognize the voices, to distinguish the proper occasions of utterance, and in which we acquire the intellectual and moral habits appropriate to conversation. And it is this conversation which, in the end, gives place and character to every human activity and utterance.


from "The Voice of Poetry in the Conversation of Mankind,"

Awoke to a stunning morning and excellent breakfast at the Cambrai Ibis. First port of call was the local LeClerc, although it may have been an Intermarche.  K. had to make various purchases, mostly of an alcoholic nature.  Having taken full advantage of our membership of the single market, we headed out of town for the Queant Road cemetery, a couple of miles to the west of the village of Buissy. 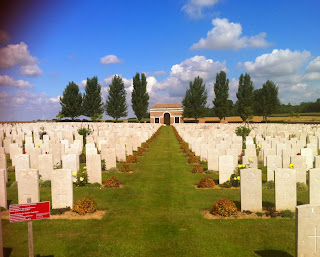 Sometime in the late 80s or early 90s Mum and I had tried to find the grave of her and K's uncle Gordon, who'd been killed towards the end of the First World War.  We had walked around several cemeteries in the vicinity of St Quentin.. Why we hadn't approached the War Graves Commission, I don't know. Anyway, it is a good deal easier to find this information now - all on the internet.  Even the precise location of the gravestone.

So we found it and looked at it and were silent. What else is to be done?


Huge sky. Flat France.  Impossible to imagine what there was to fight over.  Lavender lined the low front wall.  Bees and butterflies.  Tremendous life.

There is a wonderful essay by John Keegan, 'Rosemary for Remembrance'.  You can read it here.
at 14:25 No comments:


Season of mists and mellow fruitfulness,
Close bosom-friend of the maturing sun;
Conspiring with him how to load and bless
With fruit the vines that round the thatch-eves run;
To bend with apples the moss'd cottage-trees,
And fill all fruit with ripeness to the core;
To swell the gourd, and plump the hazel shells
With a sweet kernel; to set budding more,
And still more, later flowers for the bees,
Until they think warm days will never cease,
For summer has o'er-brimm'd their clammy cells.


Who hath not seen thee oft amid thy store?
Sometimes whoever seeks abroad may find
Thee sitting careless on a granary floor,
Thy hair soft-lifted by the winnowing wind;
Or on a half-reap'd furrow sound asleep,
Drows'd with the fume of poppies, while thy hook
Spares the next swath and all its twined flowers:
And sometimes like a gleaner thou dost keep
Steady thy laden head across a brook;
Or by a cyder-press, with patient look,
Thou watchest the last oozings hours by hours.


Where are the songs of spring? Ay, Where are they?
Think not of them, thou hast thy music too,—
While barred clouds bloom the soft-dying day,
And touch the stubble-plains with rosy hue;
Then in a wailful choir the small gnats mourn
Among the river sallows, borne aloft
Or sinking as the light wind lives or dies;
And full-grown lambs loud bleat from hilly bourn;
Hedge-crickets sing; and now with treble soft
The red-breast whistles from a garden-croft;
And gathering swallows twitter in the skies.