Ropey rooms at the Hotel St Etienne but a good breakfast.  A stout woman in her early sixties remarked on how touching it was to see three generations of men travelling together.

We headed out of town more or less the way we came in, heading for the Pegasus Museum.


The museum is just the right size, covering each aspect of the events it commemorates, namely the taking of the bridges over the Caen Canal and the river Orne, on the eastern-most flank of the invasion of Normandy, and the subsequent securing of the area around the bridges, achieved by the Ox and Bucks and the Royal Ulster Rifles of the 6th Airborne Division. Maddeningly the caption to a formal photograph of officers of the RUR in May 44 is given without the Wheldon 'H'.

The original Pegasus bridge is now in the garden of the museum, along with a reconstructed Horsa glider, the means by which the airborne troops landed on 5th and 6th June, 1944.  We wandered along it, wondering at how the past haunts the present.

We then crossed the canal and the river, headed through Ranville and began circling the area looking for what might have been 'Hill 30', which is where my father won his Military Cross.  The land is flat, but eventually we worked out that the scrubby ridge that separates Ranville from the hamlet of Ste Honorine must be the place.  We stopped at the junction of rue du Colonel Fabien and rue General LeClerc on the D223A.  Not much to see, but this was a bloody awful place to be on the 6th and 7th June 1944, for it came in for heavy bombardment from German artillery to the east.

Time to head east for Cambrai, where we'd booked rooms at the Hotel de France.  We arrived at around 4.00 o'clcock.  Cambrai is not a patch on Caen.  It seems an altogether more wounded place. The hotel was closed.  We rang a number.  A dog appeared. A concierge came.  No lift.  We took one look at the steep winding staircase to the first etage and decided that my uncle had done enough hard climbing.  We cancelled our reservation and went in search of somewhere modern with rooms on the ground floor. Ibis. Clean, comfortable and a decent restaurant. Any exploration of Cambrai will have to wait another day.

* It was over lunch in a service station somewhere in Normandy that K told us about the Wimpy "doozle dog" (Golden Egg (owned by Wimpy) did them too) - the round serrated frankfurter, nowadays known as a "bender". 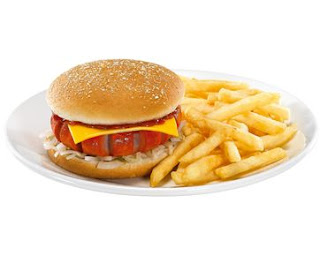 When a serrated frankfurter is put into boiling water, it curls, but it took a good deal of experimentation to find both the right length of frankfurter and the precise distance between each serration to produce the perfect size for the wimpy bun. I am sorry the original name - doozle dog - did not catch on.