from Tales from Ovid by Ted Hughes
at 23:14 No comments: Links to this post

THE BURNING by Chrys Salt

Chrys Salt:
The Burning is from my eleven poem sequence  ‘Weaver of Grass i.m. Angus
MacPhee’ about  the ‘outsider’ artist  from  South Uist who spent 50 years
in a mental institution on the mainland where, using the traditional craft
of the island,  he wove extraordinary garments out of grass. Angus’ work has
caught the imagination of many writers, poets and film makers, but for me it
was the act of sharing in its  destruction at the end of each summer  that
caught mine,  calling into question the compulsion of all artists to  do
what we  do – regardless of ‘ambition or bread’.  Thanks to the
determination of art therapist Joyce Laing, at least some of Angus’  work
survives. Iconic. Wonderful, imaginative creations. Biodegradable and
magnificent. Reminding us all of the transience of things. In the resonant
words of one reviewer, ‘ I don’t know what this work means, but I know I am
richer for having seen it.

As spiders haul their thread from stem
to stem to weave the light, what do they care
if all that skilful labour’s lost when
wind unravels it – unpicking all their
careful artistry? As birds weave leaf
and stalk into their nests, abandoning
them to decay when fledglings leave -
only to build them back again in spring,
so Angus haunts the woodland hour on hour
labouring under branches, quiet, unseen
pulls buttercup, vetch, clovers - winding flowers
like wild embroidery into cloths of green -
makes mufflers; tailored jackets, sprouting hats
garments for a giant or a king
to stalk the hills and sport the finery that
he has wrought from his imaginings,
and then forgets; so all this fine attire
is left to rot and compost in the rain.
He watches gardeners rake them on a pyre
of autumn leaves: then crafts them all again
because he must; watches their ashes wind
up towers of smoke, soaring like elegies
to distant landscapes of the mind, making
of these most precious gifts, a sacrifice.

from Grass (Indigo Dreams, 2012)
Reproduced by permission of the author.
One of the 20 "BestScottish Poems 2012" 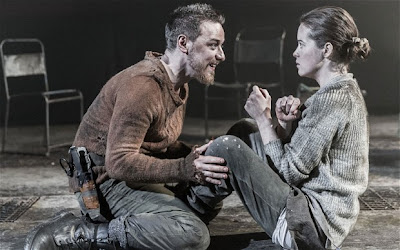 Macbeth goes Gorbals!  But before all that we had a bit of a wait while they either  a) go frozen on a pause in the Pinter rehearsal going on in the other studio, or b) they sent out search parties to local hostelries in search of cast members, or c) they cleared up after a bibulous corporate affair over-ran, or d) they fixed the blood cannon malfunction.  My pal Neil Mendoza was ready and willing to step into the title role if called for.  Luckily (or perhaps unluckily - we might have understood everything Macbeth had to say) he was not needed, although it transpired that the wait may have had something to do with McEvoy having had an accident which, while not quite unseaming him from nave to the chops, did mean he had to wear a plaster on his head and some protection around his thumb.  The ridiculously youthful director came on beforehand to crave our indulgence if McEvoy's physical action - fighting - was not quite as violent as usual.

Quite uncalled for.  Shows have to go on.  And frankly, we wouldn't have noticed any absence of laying on.  McEvoy was tremendously gritty and Scottish and physical and I suppose this was meant to make him up-to-date and authentic.  To be honest I rather liked his performance, even though I could hear very little of what he said.  Either he was shouting or he was whispering and it was all in Gorbals. But, with all due respect to other recent high profile Macbeths, it was good to see one so emphatically heterosexual.  Claire Foy ("too young', "not scary enough" were criticisms) was excellent - scary and refreshingly young, and the sexual chemistry between M and Lady M was vivid, and I - though others don't agree - think it is essential that this work for the play to do its stuff.

Some thought the stage too small for the size of the production.   I must say that despite the shouty/whispery changes in volume tone and the lapses into Hugh "we're doomed" Laurie territory, and the terribly weedy Duncan and Malcolm (Kings?), I thoroughly enjoyed this.  MacDuff (Jamie Ballard) was excellent, but then he didn't have much of an accent.  His "all my pretty chickens" speech reduced me to tears (but then almost anyone speaking it quite undoes me).
at 00:09 No comments: Links to this post


"Each publication is appraised by three reviewers (who don't talk to each other and usually don't know each other). All three provide a written review, which is amalgamated into one document."

Well, they've done it now for my own 'Tiny Disturbances', and although they are not falling over themselves to proclaim it a new Lyrical Ballads or Prufrock, they seem reasonable enough. The last one is the best (from my point of view, that is), although rather hard on the production.

I do have one or two comments.  Niall Campbell is one of a very small number of people who have read more than one collection of poems that begin with "a sonnet for mother's day, a found poem and a poem for a barmitzvah".  Apparently such a trilogy is "not usually a good sign".  Lordy. Shall try to avoid that next time round.

The two words that recur in all three reviews are 'tender' and 'sentimental', and I'll live with them. I am a tad sentimental at times.  I do try to keep the mush out, but the line between properly caught emotion and, as it were, poorly recalled feeling, is sometimes hard to reckon.

By and large I'm happy with what these reviewers write, although not for the first time the poem picked out is 'Reply' - more or less (more, actually) written by my father, demonstrating that he was a dab hand at poetry, as well as just about everything else.

Anyway, in the unlikely event of your wanting to read said reviews, they are to be found here.

I wrote this a few years ago, part of my non-Pulitzer Prize winning little production, The Father and Child Companion (available from Amazon, here, for a penny).  Immodestly, I looked it up while trying to find appropriate pieces for a daughter to say at her father's funeral (inexplicably, she chose some Shakespeare instead). There are naturally all sorts of bits I'd change, but in a certain gloopy way it is quite affecting.

...love was fixed in her body
Like a barbed arrow.


from 'Echo and Narcissus'
Ted Hughes, Tales from Ovid.


In the hope of some miraculous weather before the month is out﻿, a poem by an unfashionable poet.  Text filched from the utterly brilliant Poetry Foundation.http://www.poetryfoundation.org/

Side by side through the streets at midnight,
Roaming together,
Through the tumultuous night of London,
In the miraculous April weather.

Roaming together under the gaslight,
Day’s work over,
How the Spring calls to us, here in the city,
Calls to the heart from the heart of a lover!

Cool to the wind blows, fresh in our faces,
Cleansing, entrancing,
After the heat and the fumes and the footlights,
Where you dance and I watch your dancing.

Good it is to be here together,
Good to be roaming,
Even in London, even at midnight,
Lover-like in a lover’s gloaming.

You the dancer and I the dreamer,
Children together,
Wandering lost in the night of London,
In the miraculous April weather.

Scanning is great for vain people such as myself.  It means we can inflict our own Great Art Works upon the world.  Here are two of mine (I think if yyou click on them they'll grow): 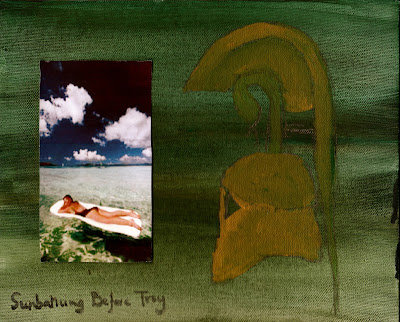 This one is called 'Sunbathing Before Troy' 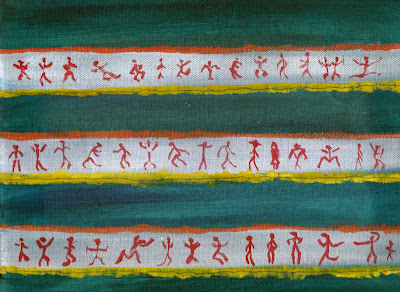 And this one is called 'Frieze'

I'm sure you'll agree they are remarkable pieces worthy of close attention.  But perhaps not too close.

A man who not only plays the fiddle like the devil, but has also won 'Millionaire'.  And, to boot, a fine judge of poetry.

PSR even more brilliant than I suggested in an earlier post.  This is a judgement that has nothing whatsoever to do with the inclusion of this extremely kind review by Doug Van Gundy of my Tiny Disturbances pamphlet: 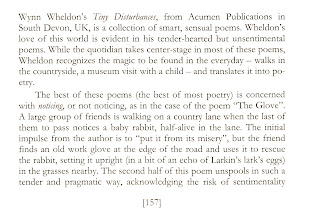 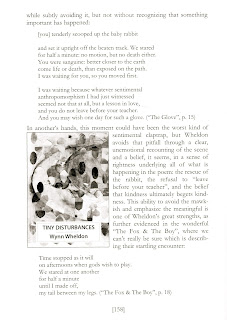 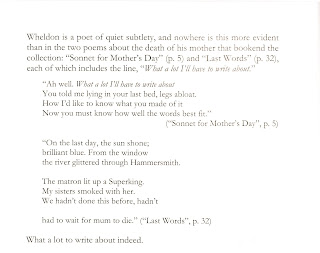 The King: a portfolio

We Rise at Daybreak