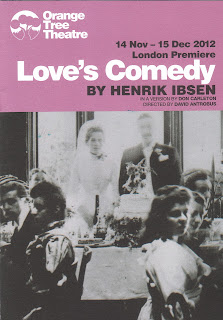 I like going to the Orange Tree theatre and I like seeing my friend Jonathan Tafler acting.  I have seen my sister in a number of Ibsen plays, but Ibsen's not on my list of heroes - not because he doesn't deserve to be, of course he does, but because I've never got into him.  So Orange Tree & Jonathan and seeing my sister and niece, all well and good.  But Ibsen?  A very early Ibsen?  Never before performed in this country?  Why not, one wondered.  Presumably because it wasn't up to much.  So: I had reservations.


I thoroughly enjoyed it.  There were no longeurs when I had to look around the audience guessing what everyone did (or once did - the OT audience is not a young one) - even during some ridiculously long speeches about the nature and/or meaning of love, destiny, life, etc..  This was one of those plays about being young and kicking down the traces of convention and so on, thoroughly ant-bourgeois.  Except for two things: a) it was by Ibsen, and so not entirely dogmatic and b) the bourgeois, ironically, emerge a little brow-beaten, but nonetheless in one piece.  Rather like 'The Discreet Charm of the Bourgeoisie' in which the cast simply keep on walking...

So, although the words were fundamentally of the student-play variety, they were richer than the usual fodder (hardly a sentence was allowed to pass without a metaphor or simile tanking it up), and the cast was thoroughly up for them, even the rhyming couplets that they quite often took to being.

The set had an apple tree blossoming and bits of garden furniture, and a van-goghy sky, plus there was a twittering (traditional sense) bird.  I wasn't bored for a minute.  Sarah Winter as Swanhild (the lead female) was excellent though her voice occasionally grated, and Mark Arends (male lead) was thoroughly inflamed as revolutionary poet / lover, etc.  Mr Tafler, as always, was terrific.
at 15:21 No comments:

"...you can learn nothing from experience, at least in my experience."

"...that suspended mood when you know there's much to worry about but you can't quite remember what it is - not exactly serenity, more a gentle vacancy of spirit."

"One's always thinking one's heard that someone's dead, and then they turn out to be alive, and vice versa, of course."


all from The Last Cigarette

"...she speaks to you as if you were a woman - her sister, an equal, her confidante."

This is not a whinge, because NZ were quite obviously the better team.  However, having watched the TV coverage on return from Cardiff, it is obvious that the crowd was right: the ref was a kiwi.  Quite apart from Joubert's inability to identify different Welsh players, NZ should have been playing with 14 men from the first minute.  It is a shame that this thuggery is so often a part of the AB game because they don't need to cheat.

Anyway, who cares - it was a great occasion.  Wales looked like a proper rugby team again, they scored one of the most memorable tries in the history of rugby, and Priestland has surely played his last game. I hadn't at all been looking forward to seven hours of driving in the incessant, merciless rain, believing we were going to be thrashed.  It was definitely not a thrashing, and indeed I believe NZ were a little flattered by the score.  We have a good shout against Australia.  Congrats to Tonga!
at 02:21 No comments:

I'm delighted to say that my short story, A Moment of Doubt, has been awarded second prize in the Rome Short Story Competition 2011-12: Italian Women

I understand that an ebook containing the winners and short-listed entries will be published before the end of the year, and of ocurse I shall keep you all posted.
at 20:17 No comments:

This is from Simon Gray's 'The Last Cigarette', and it put me at once in mind of Eric Hobsbawm, the unrepentant communist historian who died recently, amid praise from all quarters, from Niall Ferguson to Ed Milliband

Let me resist lighting a cigarette by thinking about Mao, Stalin and Hitler.  The other day, on a radio phone-in, I heard the old argument repeated - Hitler was the most wicked because he murdered millions in the name of fascism and racial superiority.  Mao and Stalin were less wicked because they murdered millions in the name of communism, a noble if possibly imbecilic ideal.  Therefore people who supported fascism and Hitler are much more wicked than people who supported communism - in fact, people who supported the USSR, those of them in this country who are still alive, are to be considered rather endearing, to be cherished and even honoured.  Their hearts were in the right place when they argued, with decent regret, that you can't make an omelette without breaking eggs - which actually is only a domestically pleasant way of saying that Lenin and Stalin couldn't make a communist state without breaking heads, legs, lives, families, spirits - without maiming, torturing, starving, killing - all the things that Hitler did but in one respect more terrifyingly because more arbitrarily.  If you were Aryan and an indifferent servant of Hitler's state you were safe, and knew what to do to remain safe, at least until the war came.  If you were a good servant in Mao's or Stalin's state you were in danger every minute of your life, and if it decided to extinguish you because, say, of a joke you were rumoured to have told, or to have laughed at, you went to your end knowing that your legacy to your parents and your children, your friends, colleagues, even your neighbours, was likely to be torture or death, or a labour camp, certainly ostracism and penury - their crime, of course, being you, knowing you and perhaps loving you.


from The Last Cigarette by Simon Gray (Granta Books, 2008)