Frankly, I feel a little ashamed of myself.  I'd been paid well to come up with pertinent snippets of poetry to adorn the walls and signs of the Olympic Park.  I'd enjoyed the work (despite the fact that none of it was used).  Nevertheless, at a couple of poetry readings before the games started I was introduced as having something to do with them, and I mumbled apologies in a particularly craven and British sort of a way.  The truth was that while I detested all the naysayers and doom-mongers and Morrissey-types (he and that idiot tweeting MP are made for each other), and pretended to be gung-ho for it all, really I was rather dreading the whole thing.  I thought it might be a terrible flop, felt as though i was the host of a party to which nobody would come.

What to say then about the most astounding two weeks in British cultural life.  Public weddings, funerals, wars, elections, football and rugby competitions - even the Ashes! - nothing in my lifetime has matched this in terms of emotion, pride, exhilaration, disbelief and hoarseness, not to mention the emptying of tear ducts.

I know we are supposed to thank the volunteers, the people of London, and the athletes first, and I don't especially like Sebastian Coe - I was always an Ovett man -  but he was a beautiful runner, and he deserves every plaudit he gets for winning the bid in the first place and for heading up this preposterous triumph. I read a story about him in The Guardian, about his queuing to get into some venue, and it struck me that there are very few countries (any other country? Norway perhaps?) where the Head Honcho of the whole caboodle would be seen queuing for anything, let alone to get into his own games.

So: Sports Personality of the Year?  I know it is crummy, but I'd vote for Seb.  I won't be allowed to though, because he won't be up there with Wiggo and Mo, Jess and Ben etc..  So I'll go for Jess because the pressure on her was by some degrees the greatest.

My favourite remark of the whole thing was that of an old Yorkshireman of my acquaintance, whose views are somewhat to the right of the Daily Express: "Nicola Adams? She's my new heroine. She's from Yorkshire you know." 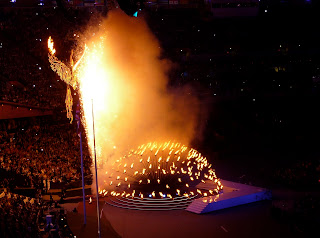