The Harbour by Francesca Brill

It doesn’t matter how often the fact is complained of, the war in the East has never had the attention of the Western front or North Africa or the Atlantic, certainly not for the British.  While we know about El Alamein or the sinking of the Bismark or Arnhem, we don’t know much about what happened where in the Orient, other than that we let Singapore go without a fight and the horrors of the Burma Road.  At least, I don’t.

Before reading The Harbour, I don’t think I’d ever given a thought to what had happened to Hong Kong.  Turns out it was pretty bloody awful and similar to what happened to much of China during the Japanese invasion.

Hong Kong was attacked eight hours after Pearl Harbour, on 8 December 1941.  The British surrendered on Christmas Day.  In the following three year an estimated 10,000 Hong Kong Chinese women were raped by Japanese soldiers.  The Japanese did not behave well.

All this is very much in the novel.  We are spared little of the obscenities of war, but actually The Harbour is a love story of a particularly moving kind.  Perhaps it takes its power partly from being based on the truth.  The lovers are people from very different worlds - on the one hand a kind of proto-feminist American reporter who eschews convention wherever she finds it, and on the other a British intelligence officer, with a passion for Japanese culture.

Further plot I shall not divulge.  It must suffice to say that the book is written with terrific authority and verve, with not a cliché in sight and anything stinking of the sentimental banished to the outer territories.  Despite this, I was reduced to tears on several occasions.

What is more, it also happens to be an adventure story.

I thoroughly enjoyed it.

The Harbour by Francesca Brill
at 19:33 No comments:

Simon Armitage finds the idea of learning poems by heart "brings back bad memories".  I'm sure he'll get over them.  I'm fairly sure Michael Gove is not thinking of grown men having to do compulsory conning .  As for Michael Rosen, he feels that learning poetry by heart will turn it into "a duty, an obligation and a bore".  Clearly, then, poetry isn't as important for Rosen as maths or physics or geography or any other subject that children are forced to study against their wills, but which I would hope he would approve the teaching of.

There is a passage in 'Touching the Void' in which Joe Simpson, crawling down an Andean mountain with two broken legs, finds that he knows several Shakespeare sonnets by heart, though can not remember having learned them.  This must have been the work of some officious Gore clone who insisted he do so.  Of course they were probably a duty, an obligation, and a bore to learn but at least they saved him from the interminable chords of 'Brown Girl in the Ring' which had been making his crawl back to life even more hellish.

Read Howard Jacobson in the Independent, here. He has it right.
at 13:20 1 comment:

Director: Matthew Dunster
Talent: Rebecca Oldfield
It didn't bode well.  The set was a portakabin, a dull caravan, and off to the side a white van.  There was a crane.  In front and around all this there was a great deal of pre-curtain improv business, with tremendous Acting going on all over the place as the cast pretended to be workers on a building site.  A cement mixer disappeared off stage here, and came back on over there.  And once the play started it was clear that Theseus was going to be a bad guy, the director presumably having studied the play at polytechnic, where he was doubtlessly told that despite all evidence to the contrary the Dream is actually a dark play about patriarchal oppression etc. with a few light bits thrown in for the ignorant paying audience.  We knew Theseus was a bad guy because he shouted "Oi".  Whether he was supposed to be the site foreman, a local gangster, a member of the country gentry or perhaps a unreconstructed ex-rock star was never made clear.  However, by the end of this intellectually vapid production it was impossible not to have had My Big Fat Gipsy Wedding introduced into your aching head, whether you've seen that telly programme or not (I haven't).  So perhaps he was supposed to be a senior male Gipsy, always an easy target.
As it happens, in the first half, thanks to some fine performances, Shakespeare survived most of what the director threw at him, and indeed there was some nifty and unexpected stage business that transformed portakabin Athens into a wood.  The fairies were excellent, Titania herself outstanding (Tamsin Carroll), and Oberon not far behind.  Generally the fairy business tends to get in the way in productions as though the director is embarrassed by it.  Here, to do the director credit, the fairies more than stood up for themselves, providing a proper contrast with the foolish humans.
The mechanicals were fine.  I've seen much funnier. Flute (Rolan Bell) was the pick and Bottom disappointing.  What was new, to me at any rate, was the number of laughs to be squeezed out of the lovers.  Both the girls were very good, but especially Helena (Rebecca Oldfield) who was outstanding, and it was generally agreed that she won the Man of the Match award.
SS and NM left at half time.  SS had "got it" and therefore did not need to see more, and NM was getting a little chilly.  It turned out that they did exactly the right thing, as the second half was a shambles.  For reasons obviously too advanced for simple-minded members of the audience to understand, the rustics' play was done in song, and followed by a medley of dance numbers, with a bit of light show thrown in.  Not even Shakespeare could survive this onslaught of the crass and vulgar, and so we were left with the memory of a good first half, the play triumphing over the production thanks to good acting, finally besmirched by mere entertainment (the director attempting to balance this with a fatuously overweighted Theseus-Hippolyta sub-plot).
The truth is, I am glad I saw it.  Despite the fact that I felt spat at, felt Shakespeare spat at, felt the actors spat at, I enjoyed lots of it, and Rebecca Oldfield is the Helena against which all subsequent Helenas shall be measured.
at 06:37 1 comment:


I abhor the slimie kiss,
(Which to me most loathsome is.)
Those lips please me which are plac't
Close, but not too strictly lac't:
Yielding I wo'd have them; yet
Not a wimbling Tongue admit:
What sho'd poking sticks make there,
When the ruffe is set elsewhere.


He's fairly particular is Mr Herrick
at 18:06 No comments: 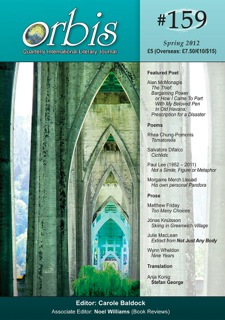 The new Orbis Quarterly International Literary Journal, edited by the magnificent and indefatigable Carole Baldock, is out, and contains one poem by me, 'Night Sky' and a very short short story, 'Nine Years', plus a special bonus two or three paragraphs on Robert Browning, on whose work, of course, I am a renowned expert.  If you are interested in subscribing to this always lively journal or purchasing just this one brilliant edition, please write to Carole at carolebaldock@hotmail.com or go to http://www.kudoswritingcompetitions.com/
at 13:01 No comments:

The shameless self-publicising cannot stop.  On Saturday June 16 I am reading at the Bath Royal Literary and Science Institution.  Details here.
at 12:38 No comments: