I watched two films on the telly last night: Drive and Melancholia. Both are extremely mannered, both bear the stamp of a director who regards himself as an auteur.  However, while the former is diverting and smart, the latter is engrossing, intelligent and unlike other films.

Melancholia is a film by Lars von Trier.  Indeed he shares substantial billing with the title.  This is thoroughly justified, because in the end it is impossible to avoid the fact that this is one person's vision.  And a wonderfully odd vision it is.  Part One takes place in a wedding reception during which the bride realises she has made a mistake. She tells her ghastly mother that she is "frightened", but we never really find out by what: it is not merely marriage.  Perhaps it is the odd arrangement of stars in the sky...

Is it melancholy she succumbs to or depression?  She seems in a fairly bad way when she turns up in the second part of the movie, although bit by bit she recovers in time for, well, in time for the end of the world (literally).  In one transcendental shot Justine is pictured naked by the bank of a stream, shone upon by the light of the planet Melancholia, which is on a crash course for Earth.  The Wagner score swells.  It is from the Prelude and Liebestod, from the opera Tristan und Isolde, a work profoundly influenced by the philosopher Schopenhauer.  Schopenhauer was a refreshingly cheerful pessimist (desire only ever leads to pain etc).  I'm not sure he went so far as to say, as Justine does, that humans are 'evil', but he certainly thought most people fools, and perhaps that melancholy was the default temper of any averagely intelligent individual.

The film is full of little references, most of which I am sure I missed, but I did get the Ophelia (the famous Millais picture gets a flash and is reproduced at one point by Justine holding her bridal bouquet of lilies) - Hamlet of course being the most celebrated melancholic in literature (and a Dane to boot, like von Trier himself).

The film is dominated by, on the one hand, startlingly beautiful imagery, and on the other by the performance of Kirsten Dunst, who is utterly convincing from first to last.

I often imagine the end of the world being accompanied by beautiful, achingly sad music (the Albinoni Adagio - that kind of thing).  Here I find it impossible not to think of von Trier feeling the same way, and bothering to share his imagining with the rest of the world.  Very sad, very beautiful. 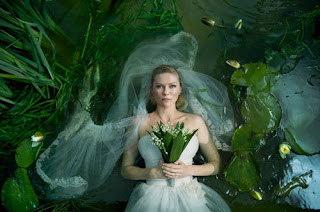