The Giant that Built Stonehenge 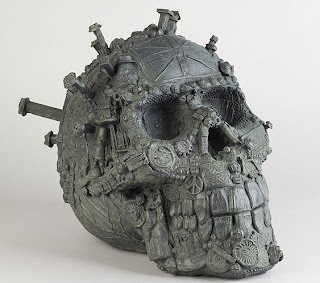 Grayson Perry's Head of a Fallen Giant is accompanied by the following text: "There has been much debate about what exactly is Englishness.  We struggle to define it.  I wanted to make something that looked like an ethnographic artefact that was about England.  At once mystical and banal, this is the skull of a decaying maritime superpower..."  Mystical and banal - does this not closely resemble what one might make of Jez Butterworth's play 'Jerusalem'? The play premiered in July 2009.  The giant's head is from 2008.  For me, it is now the giant in Rooster Byron's story (BYRON: I once met a giant that built Stonehenge.  GINGER: Oh, really.  And where was that? BYRON: Just off the A14 outside Upavon, about half a mile from the Little Chef.)