Now All Roads Lead to France

The Last Years of Edward Thomas
by Matthew Hollis


I never took to Edward Thomas. His complicated syntax (‘The great diamonds / Of rain on the grassblades there is none to break’) and that blasted, twee, “cloudlets” in ‘Adlestrop’ kept me at arms length. Then last year my son had to study ‘At the Team’s Head-Brass’, which I thought a seriously good poem.

And now there is this marvellous book about the poet’s last years. Actually what it is about is the poet’s becoming a poet, which happened, pathetically, to happen in the final years of his life. One of this book’s pleasures is the unravelling of the poems by the poet-biographer. He handles them not roughly as a critic would, but tenderly, as a brother; nothing is asserted, but the intimacy between subject and writer gives the readings real power. We are dealing not with ‘text’, as the academics would have us do, but with a person. Which is not to say that Hollis merely uses the poems to explain the life. It would be more accurate to say that he uses the life to explain the poems. Very much as Thomas himself would have wanted, I think.

It is a good story, because there is a series of climaxes which the reader lusts towards: the meeting with Robert Frost, the first poem, joining the army, leaving England, and death. The first half swarms with interesting minor poets: Drinkwater, Abercrombie, Hodgson, Munro, Brooke; and occasional major ones: Yeats, Pound (major-minor perhaps), Eliot. In he second half Thomas becomes a poet, and seems to emerge into himself, while the other characters slip away. We are left with Eleanor Farjeon, an astoundingly beautiful woman (judging from the photograph) called Edna Clarke Hall, Frost, and Thomas's wife Helen.

Poets do not need to be likeable to be good, it should go without saying, and I think Hollis does like his subject, but I don’t much. He reminds me of my own self-obsession. The hero of the book is his wife Helen, who perhaps does not get quite the credit she deserves (that goes to Frost). Thomas spends a great deal of his time running away from her and from his children, on the grounds that he cannot bear the way he treats them; but the fact that Helen is always there must have given the often dithering Thomas some sense of stability. She emerges as steadfast, intelligent, full of loving-kindness.

I suppose it is impossible, when telling a story, not to make the end seem inevitable. Thomas’s death, then, reads like the only way in which this book could finish. A melancholy man, by turns self-pitying and self-recriminating, his becoming a poet brought him happiness. This was followed by his becoming a soldier, which also seemed to bring him some kind of content. His commitment to these jobs seemed enough in itself. The coming war and the war itself pervades the four years the book covers, and it is difficult to avoid the impression that Thomas and the war were on a collision course.

One of the books Thomas read in the days before he died was a collection of Shakespeare’s sonnets, sent to him by Helen. My own father quoted Sonnet 129 in his own witnessing of war thirty years after Thomas: “The expense of spirit in a waste of shame”.

An enormous sob shook me as I read Frost’s condoling letter to Helen. Edward Thomas was indeed a poet, and I am prepared now to forgive him for those cloudlets, and read him properly. This is a simply terrific book.

from 'In Medias Res' by Christopher Reid

I find a cache of commas.
Every tomato

wears an asterisk.
A bookworm in the kitchen,
I take note

how you hold your tea-cup
by the question-mark,
and how you smile in quotes.

Came upon this line from Robert Lowell:

is structuralism the bridge from Marx to death?
(from 'Levi-Strauss in London')

- wish I'd known it thirty-five years ago when Neil Bartlett was trying to persuade Oxford undergraduates to demand more structuralism from their tutors...
at 16:24 No comments:

This is from 'The Breakdown', the Guardian's rugby blog:

When Graham Henry was the Wales coach between the summer of 1998 and the beginning of 2002, he was known as the Great Redeemer, or at least he was at the start. Today's Dominion Post asks whether that has prompted Henry to look to the Bible this tournament for inspiration as he looks to end the All Blacks' World Cup jinx.

He assembled a squad that include an Israel (Dagg), a Zachary (Guildford), a Daniel (Carter), an Adam (Thomson) and a Samuel (Whitelock). When Carter pulled out, an Aaron (Cruden) was called on and a Hosea (Gear) has also been added. A Matthew (Todd) trained with the All Blacks last week.

Which reminds me of John Taylor's kick in the last minute against Scotland at Murrayfield in 1971, following Gerald Davies's try, to secure the Grand Slam (I think): "The greatest conversion since St Paul". (Matched only by St Gav's almost 35 years later - where was he last Saturday?)

Joss Stone singing 'Don't Start Lying to Me Now'. Good stuff. Unofficial fan videos are usually not up to much, but this will do nicely. I like the way she smiles a lot. Also like that there is no blimmin' choreography.

Bubble on the Seine 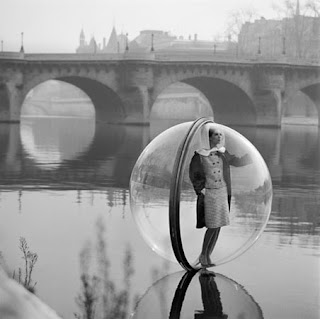 Also not to be missed, this Tuesday:
TV - Father of Modern History

I hope everyone is going to visit the simply brilliant 'Winning Words' website. Not to be missed.

Slipping from their cups the acorns rain, making

Tiny disturbances in the universe.

They pool around stiff trunks, their newness fading

As they fell; they crack now beneath the foot,

Here on the Heath on an October afternoon,

And the shades of ancient poets

Flit between the hedgerows, comfortingly sighing.

The sadness is not so much that Wales lost but that we have lost what might have been a classic Final. Speaking of which, that is pretty much going to be decided tomorrow. Can anyone see France beating Australia or NZ (refereeing decisions allowing)?

The truth is Wales should have landed their kicks - 11 points went spare - which is not to say that the French might not have tried harder had those points been scored (alhough one wonders if they are capable). To be honest, I think Wales lost a game they should have won, even with 14 men - they were that much better.

Land of My Fathers

NB I have to say that I am particularly moved by the plucky Air Wales aeroplane.
at 14:52 No comments:

The Glenkindie Arms Hotel in the Cairngorms was where spouse and I spent a memorable weekend at the the end of August. A great restaurant and a hopeless hotel, into which we were (accidentally) locked one night by the chef-proprietor, Ian Simpson, while he laid on a banquet for 200 a few miles up the road (to which we had been invited). And now this:

- which does not surprise us at all. The hotel required proper investment, which it never received. I had been given to understand that we were the last paying guests. Ridiculously expensive, it was money well spent, if just for the anecdotes it produced, but I can quite easily imagine subsequent guests refusing to pay a penny for the broken saniflow, the Primark bedspreads, the Victorian heating system, the broken stair-rail, the unopening windows, the flaking paintwork, etc etc...

Ian Simpson is a terrific chef. Should you come upon an establishment owned or leased by him, certainly eat there, but...
at 19:30 No comments:

The most beautiful TV advertisement ever made.

Names to Conjure With...

Well, Lou Reed and Andrea Corr are one thing, but I heard this on the radio this morning, and I wondered whether perhaps it is the most beautiful thing in the world. This is from Cosi Fan Tutte. I'm not an opera buff in any way, shape or form, but I've heard Puccini and Wagner and Verdi, and they're all wonderful in their own ways, but they ain't Mozart.

Gentle is the wind,

Calm is the wave,

And every one of the elements

To our (your) desire.

The Lou Reed song as performed by Andrea Corr. I have always loved this song, and this isn't at all a bad stab.

culled from my old Commonplace Book. The last is my favourite.

...the kiss of the past is narcotic...
from 'Western Landcsape', Louis MacNeice

The awesome mystery of beauty! God and the Devil are locked in battle over this, and the battlefield is the heart of man.
from 'The Brothers Karamazov', Fyodor Dostoevsky

All the great goods cannot live together.
Immanuel Kant

God, in the whizzing of a pleasant wind,
shall march upon the tops of mulberry trees.
from 'David and Bathsheba', George Peele
at 15:11 No comments:

Thank god for that. Whatever the truth may be, the Italians haven't done themselves any favours. Justice seems to have played a minor role in the case. The Italian police are hopeless, and the Italian press isn't exactly a by-word for the bold questioning of authority (the Italian Press is ranked 24/25 in Western Europe in the Freedom of the Press rankings published by Freedom House). Which is not to exonerate the British tabloids, the reports in which have been lurid, sensational and downright mendacious, surprise, surprise. I have always thought Knox's confused initial stories indicated innocence rather than guilt, as in The Winslow Boy. Anyway, I'm glad she can leave Italy. I wonder what Sollecito will do?
at 07:18 No comments:

6.00 am next Saturday
This should, of course, be the semi, but there we are. The lame ducks of England and France contest the other quarter and Wales and Ireland must fancy themselves getting to the final against either of them. Then again rugby, not unlike football, as it happens, to be honest and other cliches, is a funny old game, and both England and France are perfectly capable of beating anyone if the rhythm is right. Still, Ireland and Wales have been the exciting Northern hem teams, and I am bound to say that it is a very long time since it was so exciting supporting Wales. Even the two recent Slams (2005, 2008) weren't quite like this. (Having said that, I don't think I have ever been so mind-bogglingly, lung-emptyingly astonished as at that Wales -Scotland match last year). The idea that we don't have to play Hook or Shane Williams in order to put out a first team is invigorating. I believe the dark arts of the experienced Irish, the dominance of O'Connell at the line-out and the genius of BOD make them favourites, and judging from the Irish newspapers, some Ireland fans think the thing is done. The Welsh, however, can't see a good thing coming until it has gone. I hope Wales win. If they do it will be because the Irish have finally run out of puff, if not of fight. My prediction: Wales winning in the last quarter.
at 18:08 No comments:

I have passed the whole of this year in uninterrupted lounging and pleasure.

I have now familiarized myself with maxims sanctioning and encouraging a degree of intercourse with society, perhaps attended with much risk.

Now, who would you rather have lunch with, the Liberal or the Tory?

These entries were brought together by Philip Magus in his biography of Gladstone.
at 17:28 1 comment:

The Shameful Secret of Poetry

An American in Paris - Trailer

A trailer in which all the hyperbole is justified. Fairly rare.