A Visit to the Highlands, Part One 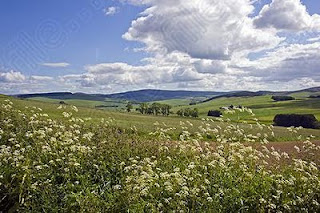 A year or so ago, at my wife’s 50th birthday party, we were invited to Scotland to celebrate the 25th wedding anniversary of James and his wife Kerry.

My wife Debby had met James when she was employing him as a location caterer on various shoots (I mean commercial films, not grouse-bagging); he then approached her with a TV idea, This is Your Fridge. (Although we failed to sell it in the UK, it did become Norway’s most popular TV show.) Relations have been maintained, albeit from afar because James and Kerry live in California, and make wine.

Then the invitation turned up, directing us to a website, and we realised that we were not being invited merely to a wedding feast but to an entire civilization.

On Friday August 26 we woke early in order to get the Aberdeen train, leaving from Kings X at 10.00 am. We could not take a later train because in order to hire a car in Aberdeen after 6.00 pm you have to travel to the airport from Aberdeen station. The problem is that if you do get a later train you may not have time to get to the airport before that closes. It is complicated.

Not as complicated, it would seem, as sitting down on a 7 hour train journey. We thought we had reserved seats. We hadn’t. The train was full. I took up a standing position in the centre of a carriage and decided to re-evaluate my attitudes to Zen Buddhism for the next half-day. Debby went to make enquiries in the buffet car. Moving up and down the aisle was slow and hazardous. Ill-tempered people squatted on the floors between the seats, deaf to those approaching from behind because seeking refuge from their misery in their iPods and iPhones and iDontknowwhats. Small children looked miserable as only small children can – with a kind of blank hopelessness which makes you realise that this is indeed a vale of tears etc…

Debby returned eventually with various stories about football matches, the last weekend of the Edinburgh festival, broken-down trains and so forth. We could upgrade to First Class but it would cost us each £136 just one way. And it would mean the ticket inspector having to root out First Class impostors (of whom, apparently – and understandably – there were many).

And now we were smiled upon, because we were standing next to a young, beautiful and fit couple. Pete gave up his seat to Debby. Kate tried to give up her seat for me. We both refused. They were, however, persistent, and finally Debby sat down almost all the way to Leuchars in Pete’s seat. Pete and Kate are in Sustainable Energy. More importantly Pete, an Anglo-Welshman, had spent four years at the University of St Andrews and when we explained that we would be reeling and whatnot at a wedding party, warned us to avoid the 51st Regiment, a reel of grace but diabolical complication (although, as it turned out, as simple as the Twist when compared with the Duke of Perth). They were gallant and charming and Kate had a wonderful laugh and Pete seemed to know many of the facts that I have forgotten (Tay Bridge disaster, curious international status of Berwick-on-Tweed, etc) and they were altogether a very silver lining to what had been a thoroughly grey and heavily rain-laden cloud.

A cheerful young woman was only 15 minutes late with our nippy little Peugeot and we headed off west towards an increasingly impressive sunset and the Cairngorms.

I’d phoned ahead to make sure the hotel was ready for us, and was assured that they were and that they’d hold a table. The voice at the other end of the phone sounded cheerful but hard-pressed. It was the voice of Chef Patron Ian Simpson.

I couldn’t escape a feeling of dismay as we pulled up at the Glenkindie Arms Hotel. I had had a vision of bourgeois luxury and modern hospitality in a setting of traditional blah blah blah, but the old drovers inn hadn’t been painted for years, and there was a general air of untidiness and neglect about the place. 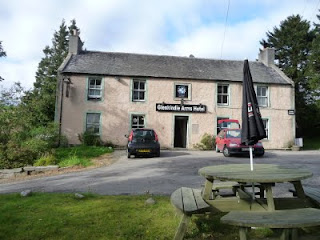 We were shown to our room, which was to be our home for the next four nights. It wasn’t a £100 + room. In the ensuite bathroom there was a Saniflo loo, no bath, a quaint like-in-your-gran's-house switch for turning the hot water on, and the shelf above the lavatory was covered with a towel to hide the badly peeled paint work. The shade was pulled down to save us from a view of the Chef-Patron's caravan and the kitchen wastebins. The linen on the bed was from Primark.

We ate a breathtakingly good meal. I had warm mackerel with something delicious drizzled and draped over it, and Debby had curried scallops. I had ‘barbury’ duck, she had lamb. I had chocolate fondant. Debby had crème brulee. We drank a delicious bottle of Cabernet Merlot, chatted to an elderly American couple from Texas (he was in Unsustainable Energy) who were visiting the Games not for the first time, and retired to bed. All well and good.

Thing was we had to be up at 7.00 in order to get to Bellabeg Park in Strathdon for the Morning Muster of the Clansmen before the commencement of the Lonach Games. We made it, staked our claim just over the bridge from the Spar, and watched as at 8.01 precisely the pipe band and clansmen began their march through the glen. Seven times they would stop for a dram before reappearing in the games arena at 1.00 pm. 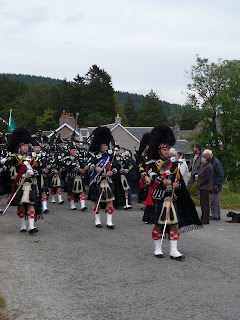 I found the whole thing rather moving. A pipe band in full regalia is a magnificent beast and makes a magnificent noise. The clansmen marching behind, long pikes against their shoulders, perhaps did not bristle with the ferocity of their ancient forebears, but they were manly enough to have more than satisfied the founder of the games, Sir Charles Forbes, 1st Baronet of Newe and Edinglassie. He dictated that the Society that administered the games should support “loyal, peaceful and manly conduct; and the promotion of social and benevolent feelings among the inhabitants of the district.” Debby and I followed to the first stop, and then went back to Glenkindie for breakfast (which included the best mushrooms I have ever eaten) and a nap. 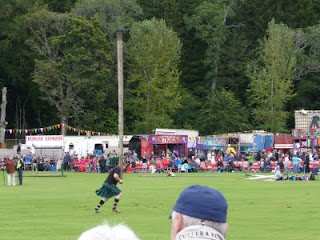 We were back in Bellabeg for mid-day and the beginning of the sport. We watched some caber tossing, some hoiking the bloody heavy stone over the bar, some hammer throwing, some individual piping, some highland dancing by very young girls and eventually the return of the band and the clansmen. Debby’s friend James turned out, much to my wife’s surprise, to be Sir James Forbes, 8th Baronet of Newe and Edinglassie and Patron of the Lonach Games. He it was who led in the clansmen, looking grave (perhaps a little dram-grey?) with his sword held before him, and very much the part, his long white sporran swinging before the dark Forbes tartan of his kilt. 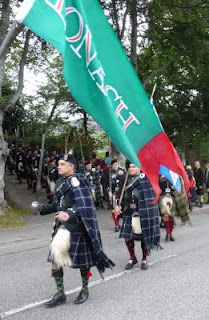 We wandered around, bumped into Kerry, James’s wife, and their children, Catherine and Theodora. Kerry is a lovely diminutive matriarch, of good cheer, and her daughters are an utter credit to their parents: beautiful, bright, polite and, it would turn out, sinuous natural reelers.

We left the crowds and went for tea in a nearby garden centre. Although the hotel restaurant was fully booked for the evening, Ian told us that he could feed us at 5.30. I had Aberdeen steak. Debby had the scallops again.

Now it was time to get up to Glenbuchat Hall for a local ceilidh. The idea had been to make barbecues, but the weather had already begun to turn and by the time we got there (never have I seen so many rabbits, as we drove up) everyone was inside, drinking and dancing. We kept ourselves hidden away at the back of the hall and selfishly tried to monopolize James and Kerry before they pushed off to a Grand Do at the Billy Connollys. (Billy and Pamela’s had been one of the dram stops, and there was a Billy Connolly prize for the best piping at the games – won by a Simon McKerrell of Lenzie).

We left soon after them and made our way back cautiously through a very dark and increasingly cold night. We were to find out what 'cold' really means the following morning.

The McZimmerman Award for Best Sporran goes to: 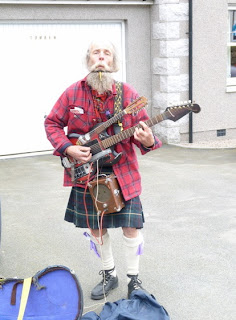 How about a writerly riot -
bespectacled quirks looting Thomas Hood’s
Complete Poetical Works or lurking,
penknifed, in the Humanities stacks
turning up their noses at the paperbacks?
Or perhaps a Thomas Wyatt riot,
lovelorn ruffians torn between conceit
and passion, roughing up the ruff-makers,
daubing sonnets on the walls and wailing
in (and wearing) their melancholy fashion.
Or, best, a quiet riot, the lawless streets
aglow with bowed heads over Bardic tweets,
bookshop windows by greed for wisdom burnished:
conflagrations devoutly to be wished.

Yes. I remember Adlestrop -
The name, because one afternoon
Of heat the express-train drew up there
Unwontedly. It was late June.

The steam hissed. Someone cleared his throat.
No one left and no one came
On the bare platform. What I saw
Was Adlestrop -only the name

And willows, willow-herb, and grass,
And meadowsweet, and haycocks dry,
No whit less still and lonely fair
Than the high cloudlets in the sky.

And for that minute a blackbird sang
Close by, and round him, mistier,
Farther and farther, all the birds
Of Oxfordshire and Gloucestershire.
at 00:16 No comments: 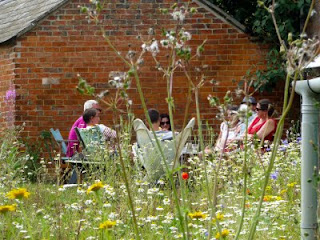 On the Oxfordshire-Warwickshire border - within walking distance of Traitor's Ford, (still a ford and named during the Civil War, though by which side I can't remember), and Hook Norton, home of the famous beer, and Cherington, where so many delicious English days were passed in what now feels a sort of Bridesheady youth, and, of course, not that far from Adlestrop itself - an idyllic weekend. Leaving London on Saturday, sans children, buying damsons and Evesham plums and English prosciutto, eaten with sweet bread from Ronnie's bagel bakery in West Hampstead, snoozing post-prandially in the sunshine, reading a superior thriller, before a little romance, showers and then out, to walk the half mile to the neighbouring village, there to eat barbecued lamb and grilled courgettes sliced thinly, and to drink well around a restoked barbecue in the company of old and good friends. Waking the following morning with the sky blue before us, breakfasting on local eggs, and heading off to a nearby yard sale, where we buy a Burmese oven and a pretty garden bench decorated with fruit. There follows a walk, a good hour above the two villages and through the woodlands, down through meadows fluffy with poppies and cornflower and purple thistle and daisies and meadowsweet and I don't know what, to the pub; two pints of the local brew and half a pint of prawns, and then returning again to the friend's garden, which is half meadow itself, light as summer, where we sit for a while before returning with a dawdle to our own cottage. A siesta, a watering of the plants, and a clear up before we pile into the car with bench and oven and dog and return to London... meanwhile, at Trent Bridge, Broad and Bell are making cricket important again. Summer in England.
at 23:46 No comments: