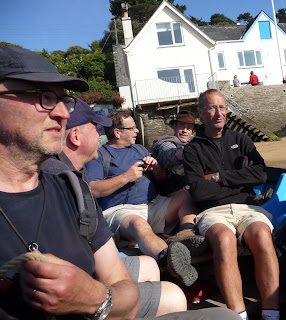 Old boys on a boat

Val, proprietor of the B&B in Slapton, the name of which escapes me, was terrific. She was cheerful, straightforward, and when asked about Bruce Forsyth (the paper announced his K) didn't seem to have much time for baubles (she may well be a secret republican) , and had even less for mountain cyclists on the coastal path. "Devils", she called them. The rooms were especially comfortable in the sense that they were not too B&B starchy - rather like Val herself in fact. A very good night.

Morning brought anticipation of seeing TPJM at the end of Slapton sands, by The Tank. He would walk with us to Salcombe. It was indeed a real pleasure to see him. Strange how the familiarity of school friendships endures. Of course he's a terribly easy chap anyway...

RR had been concerned about Group Dynamics. Was there going to be an HR problem? We had never been so large a party before. We have shrunk to six, and we had thought eight was the optimum number, but the extras we took on this year - all west country bods - made nothing but a pleasurable ripple. This walk was perhaps the best yet.

JAH and I took an interesting diversion not far from the coast, and found ourselves in deeply jungular surroundings. Keep following the stream we said to each other, as though we'd been shot down behind enemy lines. We both had sticks, without which passage would have been impossible. It struck me later that night that of all the party JAH was the one I would have chosen to be in that mess with: optimistic, temperate, amused, aware of the world immediately around him, never too earnest, but not childish either. It took me back to days following him down streams turning over rocks to find crayfish. We'd made a mistake, but like a Leonardo blot, something rather special had been made out of it.

JAH and I reached the Pigs Nose in East Prawle just in time to miss lunch, but sandwiches did fine and what was to follow was the most spectacular walk we have had so far, along the coast to Salcombe. Breathtakingly lovely. The light was sharp, defining everything with utter clarity. This was early summer, before the haze sets in; there was a breeze; the silver sea sparkled. JAH wanted to know why it was ever necessary to go to Turkey or anywhere else for that matter. TPJM was of similar mind. SAF was reminded of the Costa Brava. RPH and MDF swam again in a tiny cove we had thought only accessible by water until we spotted a vertiginous little path that health and safety haven't put their ruinous little signposts and barriers into yet.

We walked into Salcombe up and over and around, through the bracken, into the sun, and took the little ferry across to that town and made our way to the third rate hotel with first rate views. Company made it first-rate anyway, so our complaints were amused rather than angry. I finished my evening in the legendary Room 312, sitting out on the balcony until the rains came.

We are lucky people to have such friends, and I think we also deserve each other. Thanks, as ever and always, to RR for laying on a hint of heaven for us all.