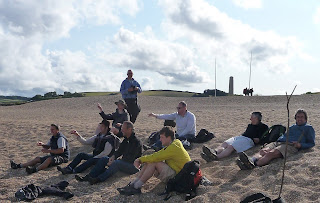 
So this year we were a round dozen, swollen gently and delightfully to thirteen on Saturday for the stupendous coast path walk to Salcombe.

We met at Tuckenhay at The Waterman's Arms on the Dart. The first shock was to find that GOB and TC had matching waterproofs. Still, there was nothing to be done now, for the weather was closing in and we had to get going. There was a flapping of goretex and headware appeared. The Alpha males decided we couldn't possibly actually walk to Slapton, or at least not all the way, and so we drove to Blackawton, parked the cars, walked for about a quarter of a mile and got lost. Luckily we found a hedge to crawl through and a lane to slide into from it. What japes. (I think it is worth recording here that as we disembarked from our taxis at Blackawton - 12 aging boys, some more corpulent than perhaps they ought to be, self very much included - a woman on her bicycle asked "are you terrorists?". Actually it turned out that she hadn't asked that at all. She had asked RPH if he was a Rotarian. Few are the people less like a Rotarian than RPH. He is closer to being a terrorist - although of course a very sensitive one).

The most direct walking route, according to Google maps, ought to have taken us an hour and a half. Four and a half miles. We managed to turn that into 7.8 miles (and I don't know how long), according to GOB's GPS. But RR said GPS machines were "bollocks", and who are we to argue. We walked through a rather well-done nature reserve out to Slapton Sands, which naturally are not sands at all. Well, not what i would call sands. I'd call what we sat on as very small pebbles, a sort of ur-sand. MDF performed his first inimitable act of nudity, brave soul, and dipped into the icy brine.

The evening was of course dedicated to MAH, 50 that very day. Everyone made a speech saying how much they loved the dear man (among other qualities his Big Packet and his Sense of Priority were highlighted). Then MDF and AK argued about the merits or otherwise of circumcised and uncircumcised penises, too loudly for JAH's liking. (MDF and AK like to have at least one big row per walk - tradition is important.)

All this took place at the utterly exemplary Tower Inn, managed by the fragrant and beautiful Thea, with whom everyone fell a little in love.
at 21:18