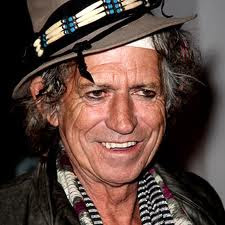 He may have been a choirboy but ageing Stones fans know that there’ll always be a moment in a Stones show when they can get that much needed second pee in. Younger ones in the know make a rush for the bar: Keef’s going to sing.
So far as I am concerned the Stones are rock and roll. There is nothing beyond them. Is there anything in popular music dirtier, more low down than Tumbling Dice? Sex and drugs and rock and roll.
This book might have been called that, though perhaps you could substitute ‘Mick’ for ‘sex’ (not that there isn’t plenty of that – Keef doesn’t subscribe to conventional bourgeois notions of sexual monogamy). I enjoyed almost all of it, though I think we might have been spared details about Keef’s dogs or his recipe for bangers and mash. The curious thing, given that it is an autobiography, is that its subject doesn’t come out all that well. Not being able to decide which it is cooler to be, Richards likes to be both victim and victor. This is particularly the case in his dealings with Mick Jagger. One would very much like to hear Jagger’s side of some of these stories. Coming out from years of heroin-dependency Richards seems astonished that Jagger should be reluctant to relinquish control of the band; the reader wants to stop the chattering flow of the book (cleverly done by co-author James Fox) and say, Whoa! Keith? Really?
In truth, despite the press stories, most of the references to Jagger are complimentary. Richards knows that Mick’s talents equal his own. Again a curious dichotomy applies: while Richards is generous to, in awe of, honored ny, fellow musicians and heroes, at the same time there is a dictatorial streak that I fancy he rather admires in himself. He is the leader of his local Scout pack (with a jersey festooned with badges); and later in life when underlings fail to do what they are asked, his wrath is immediate and occasionally violent (one DJ is put to the floor and kneeled on when he doesn’t stop playing Stones songs while Keith is in his disco – KR seems to think this completely justified behaviour). In other words, you wouldn’t want to cross him. To cross him you’d have to be Mick Jagger. These are two big egos.
The best bits in the book are the bits about writing, playing and recording the music. Which is as it should be. The difference between Jagger and Richards is that Keith doesn’t think being the Rolling Stones is “an act” and Mick does. Keith thinks its about the music. Of course, they’re both right.
at 18:48