Can Chelsea keep the Spurs at bay? Maybe, but in the meantime, here is my favourite goal ever.

"(As if God's finger touched but did not press
In making England!)"
- Elizabeth Barrett Browning, 'The Sweetness of England'
at 18:36 3 comments:

To the Everyman last night to see The Way Back, first rate Peter Weir film about the escape, sometime in the 1940s, from the Gulag to India, across ice, mountain, desert, etc.. The motto of the film is "Just keep walking", and at the end it becomes a metaphor for the fight against communism. However, the film's fibre is to be found in the relationships between the escapees. This is rarely done in words. There is for example a moment at which a young woman who has joined them tends the foot wounds of the old man who is most suspicious of her, a man whose 17 year old son had been executed by the communists. It is a moment full of meaning, with no words, made more than merely touching by the marvellous Ed Harris, one of Hollywood's few actors (as opposed to stars). I'd give him an Oscar for this scene alone. I doubt that the movie would have quite the force it has without his grizzled presence. Having said that, all the performances are good, and the direction unobtrusive (as ever with Peter Weir - he's very much a don't-look-at-me director) while giving us David Lean-sized landscapes. Highly recommended.
at 11:55 No comments:

Of Gods and Men

There will be guff written about French colonialism, Islam and corrupt North African governments, but this is a simple story about faith. And a particular faith, at that, a Christian faith based on love: "Love is eternal hope". This is the love of caritas, charity, the love for others, having little to do with desire. The nine Monks who are the heroes of this story all find that selflessness that faith allows challenged by the circumstances in which they find themselves. It is their triumph that they resist the challenge, and it is their tragedy, too. This is a deeply Christian film but without the hint of any proselytizing. There is no preaching, all is drama. It is also beautifully told, a joy to look at. It is very good to see a film in which stillness is considered a theatrical device. It will probably be gone from the screens soon, which is a shame, but catch it if you can.
at 20:59 No comments:

Doubtless, this will be considered simply another smear on the good name of wikileaks, but I promise you there is nothing trumped up about this. One of Wikileaks' spokesmen is Israel Shamir aka Joran Jermas, an anti-semite and conspiracy theorist. Details about Shamir and his associates, back in 2004, can be found in a Searchlight article, here, but The Guardian, gawd bless it, has an even more up to date story, here.

I won't pretend that I'm a lover of wikileaks - it seems to me to be a great example of power (knowledge) without responsibility. While democratic governments are subject to checks and balances (that may or may not work, admittedly), are wikileaks to be answerable to no-one at all?

If you want to read Israel Shamir on the subject of Wikileaks, you can find him here, defending Wikileaks against nutters who believe it is a CIA/Mossad operation.

To the Wigmore Hall last night for the Messiah, performed by the Early Opera Company, conducted by Christopher Curmyn. Despite a chorus consisting of only eight singers and an orchestra of not more than a dozen or so players, the ensemble made a commendably thrilling noise. Iestyn Davies singing alto (singing the airs I know from listening to Kathleen Ferrier) and Derek Welton (bass) "owning"(the word is my son's) the stage were outstanding soloists.

What is striking about the piece is the variety within a single idiom. It has what you might call a modular strength - lots of different bits go to make up a seamless whole. And that final chorus is really quite breathtakingly like the sound of a choir of angels.

Has triumph ever been expressed so joyfully? No, never.
at 12:15 No comments:

Clare Solomon, 37, President of the University of London Students' Union has this to say (write, actually, on her Facebook page) about the persecution of the Jews: "The view that Jews have been persecuted all throughout history is one that has been fabricated in the last 100 or so years to justify the persecution of Palestinians." I'm sure all students of the University of London are grateful to be represented by someone with so sure a grasp of history. She did 'apologise', thus: "This badly worded comment was something that I wrote in haste on Facebook. I’m sorry for any misunderstandings." Who exactly did the misunderstanding, one wonders.
at 11:46 No comments:

Journey of the Magi 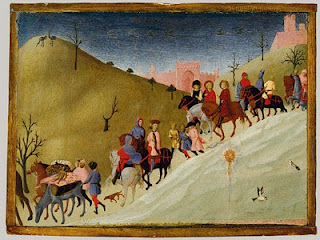 The Journey of the Magi (fragment), ca. 1435
Sassetta (Stefano di Giovanni) (Italian, Sienese, active by 1423, died 1450)
Tempera and gold on wood / The Metropolitan Museum of Art

My friend Rupert Walters sent me the following link this morning, and I hereby purloin his kindness and pass it on. What a very good poem this is, and well recited, too. Verse trivia: Dylan Thomas used to call Eliot "the Archbishop".

Journey of the Magi by T. S. Eliot

MERRY CHRISTMAS
at 11:22 No comments:

There's No Home by Alexander Baron

An unheard of book by an unheard of author, kindly lent me by the publisher of a reissue of said unheard etc, coming in Spring next year. This is a very good book, originally published in 1949 (but as fresh now as then), describing "the dream time between battles" spent by a company of British infantry in a town in Sicily during the second world war. There is a hint of Captain Corelli about it, but it is closer to home, more familiar. It describes relations between the soldiers and the (mostly) women of the street in which they find themselves billeted. In particular it tells the story of Sergeant Craddock, married to a woman he hardly knows, and Graziella, a passionate wife of a man who has gone missing while fighting in North Africa. And if ever there was a story to justify adultery this is it. There is in their tale the innocence of true, brief love, and while the inevitable end is sad, its sweetness depends upon that sadness. A lovely, true book, and highly recommended. Please look out for it.
at 15:48 No comments:

The Green Man by Kingsley Amis

After two fairly ghoulish works about communism and nazism, a ghoulish novel about ghouls, and a first-class one too. What Amis is terribly good at is making his hero flawed enough to be recognisable, but not so flawed as to be monstrous. This book has laughs, and has shivers, and has thoughtfulness. There is even a longish conversation, a la Dostoevesky, between the hero and God (who is described as being "about 28 years old"). Reminded me powerfully, in its depiction of a certain kind of Englishness - rural, pagan, mysterious - of the novels of P.M. Hubbard.
at 20:54 1 comment:

What would you say was the common thread here? Oh yes, that's right - a shared respect for human rights and toleration of political dissent. Not sure why they were invited to attend the ceremony in the first place.
at 11:08 No comments:

The Outside of Books

From Howard's End: "the aspirations, the mental dishonesty, the familiarity with the outside of books". This makes me blush as I try to sort out my books, reflecting on how very few of them I have actually read. For example, I have about five foot of books on Russia, the Soviet Union and Communism. I simply cannot have read more than six inches. Okay, maybe a foot. I have before me a perfect example of a book I would like to have read - the outside of which I am familiar with. It is called 'The Passion of the Western Mind', by Richard Tarnas. It is a history of ideas. It has underlining up to page 12. The spine is singularly smooth and unbroken. Not so Bill Bryson's Short History of Nearly Everything, which I probably have read the whole of while sitting on the lavatory. I am, I'm afraid, a middle brow who aspires to be a high brow. I listen to Springsteen and wish I wanted rather to listen to Poulenc. Ah well. Bruce and Bryson will do just fine. I also prefer 'Destry Rides Again' to 'The Seven Samurai'.
at 01:46 No comments:

I've already mentioned this on The Shakespeare Club blog, but it is so good I thought I might draw it to your attentions, too. Orson Welles, Peter O'Toole, Dad and Ernest Milton smoke cigarettes and cigars and talk about Hamlet in a rambling, rather delightful and learned way. Unfortunately it cuts out just before O'Toole manages to finish telling us the three approaches to the ghost...

I assume there will be plenty of kick-backs for FIFA committee members as the Russians build the roads, railways, stadiums, hotels they'll need for 2018; meanwhile English fans can look forward to a rare old time in Qatar. This is information from the Foreign Office, which I have filched from The Guardian:

"It is a punishable offence to drink alcohol or be drunk in public. Offenders may incur a prison sentence or deportation. Alcohol is, however, available at licensed hotel restaurants and bars, and expatriates living in Qatar can obtain alcohol on a permit system. You should not carry alcohol with you, including in your car (except to take it on the day of collection from the warehouse to your home).

You should dress modestly when in public, including whilst driving. Women should cover their shoulders and avoid wearing short skirts. You should behave courteously at all times. Any intimacy in public between men and women (including between teenagers) can lead to arrest. Homosexual behaviour is illegal in Qatar."

The question is this: in a nation of less than a million do they have big enough gaols to put all the English, Dutch, German and Scandinavian fans who like a beverage now and then?

As for the ban on homosexual behaviour, at least that will keep the Croats happy. And that's important, isn't it?

Qatar is ranked 113th best national team in the world, which is above Rwanda and New Caledonia, for a start. Actually, how about New Caledonia for 2026?
at 18:14 No comments:

A good one this year. The very likeable Brian Cox talking about science on the telly.

Dust of Snow by Robert Frost

Has given my heart
A change of mood
And saved some part
Of a day I had rued.
at 00:31 No comments: