The Slap by Christos Tsiolkas 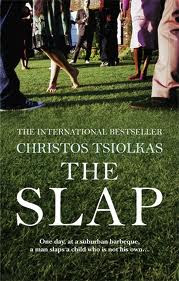 There are moments while reading this book when it impossible not to chortle as we learn of yet another dysfunctionality in one of the families portrayed. It is like a ready reference for the modern melodramatist. There isn’t a character without a faithless spouse or an alcoholic parent or a needy child or a hard-hearted lover or a loss of faith or a finding of faith or AIDS or poverty; everyone is “damaged”. There are Greeks and Aborigines and Indians and ‘Australians’ and Christians and Muslims and Jews and Atheists. Each chapter treats of a different individual present at a party in the Melbourne suburbs at which a small boy is slapped by an adult who is not his parent. This act is the ‘donne’* that takes us into this deeply heterogeneous world. At times, it is laughable, but then this is comedy rather than tragedy. There is something Jonsonian about it – every Australian in his or her humour. Perhaps the reader should assume that the author knows what he is doing. Having said that, by far the best chapters are those that concentrate on the Greek characters; the best chapter of all is ‘Manolis’, the Uncle of the slapper, a moving, nuggety portrait of old age.

The Slap is a comedy without the laughs.

And yet…
…the boy at Waterstone’s who sold it to me had tried to read it and had found the characters unsympathetic. And he is quite right. You wouldn’t want to spend more than an evening or so with any of them. Obviously, in accordance with what I have said above, they are all in some way representative, but when one begins to think about what it is they represent, then tragedy enters our considerations. For what these unattractive personalities are all trying to do is The Right Thing. No one is murdered or commits suicide; but great decisions are taken, impulses acted upon foolishly, anguishes incurred. They all live vividly.

The author seems to have a sentimental attachment to the Asian way of life and a knee-jerk contempt for Anglo-Saxon culture wherever it rears its seemingly always-ugly head. Does the book contain, then, a horror of the multicultural ethos that now dominates bien-pensant Anglo-Saxon thinking? Is miscegenation one of the objects of the book’s scorn? There are so many mixed marriages, so many infidelities and cultural confusions that it is hard not to draw that conclusion, although I daresay the author would bridle at the notion. So I shall be sympathetic and suggest that they are merely a function of the unfunny comedy.

At one point in the book Larkin’s famous line appears: they fuck you up, your mum and dad. But actually the almost deafening message of the novel is that they fuck you up, your children. The Slap is telling us that with adulthood, with parenthood, comes responsibility, which is the enemy of freedom. And so the book ends with a joyous, drug-fuelled frenzy of dance, the self lost, and the promise of homosexual, childless love.

As you can tell, I cannot make my mind up about this novel. It infuriates and impresses in equal measure. Some of the writing is very good indeed – especially the almost Lawrentian ability to change his characters’ minds and moods within a paragraph – but there is always the smell of soap faintly in the air. It is a good book, a book about the struggle to live properly, but perhaps not a likeable one.

And I shall very likely change my mind again before too long.

*(imagine an acute angle on that ‘e’ – I think this is a Henry Jamesism. A donne is the thing that starts the fictional ball rolling)
at 08:59