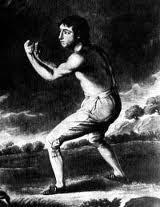 My wife's illustrious forebear, Daniel Mendoza, champion boxer, Light of Israel, author of The Art of Boxing as well as a splendid memoir, spent time in Dublin under the showman's eye of the equally illustrious Philip Astley, the inventor of the circus.

Daniel Mendoza was already a star in England before his final fight with Richard Humphreys at Doncaster on 29 September 1790, but his victory there produced a burst of invitations from every corner of the Kingdom.

He went first to Edinburgh and then to Dublin, where he had been engaged to perform exhibition bouts with his brother at Astley’s Dublin amphitheatre, known also as the Equestrian Theatre Royal, in Peter Street.