The Silence by Fiona Seres

This was an outstanding piece of work, and rather than describe it i shall simply urge you to watch it on BBC iPlayer. Genevieve Barr, the deaf actress at the heart of it, is surrounded by an outstanding cast in a drama that manages to explore multiple themes while keeping the dramatic tension ratcheted up throughout. Congratulations to all involved.

The Retreat by Jenni Herzberg 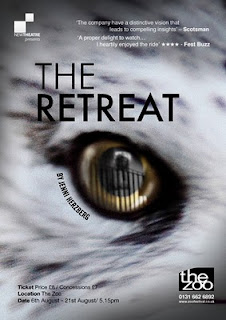 If anyone reading this happens to be attending the Edinburgh Festival, be sure to take in 'The Retreat'. Bound to be first class. It runs from 6th - 21st August at The Zoo. More Zoo-ie stuff here: http://www.zoofestival.co.uk/

More on The Retreat here.  And here.  Er, and here perhaps.  More on Jenni Herzberg here.
at 20:04 No comments:

Wimbledon, the World Cup and now Cuba. The Spanish appear to be on a roll. The Roman Catholic church also appears to have done something worth celebrating. Read the BBC report here.

And you can read about the rather wonderful Damas de Blanco here. Or if your Spanish is up to it, here.
at 10:44 No comments:

Howard Webb and the Dutch

The Dutch whining - Robben!!!! - left a rather sour taste. They would have been undeserving winners had they snatched a last minute goal or won on penalties and they have proven to be poor losers. This is a shame. I had started the game marginally wishing for a Dutch victory (Neeskens was one of my favourite players ever). By half time, as everyone knows, Holland should have been down to ten men. Howard Webb, having let De Jong get away with it, for the sake of the game, one supposes, thereby gave Holland licence to hack at Iniesta and co for the next hour and a half. Is it cynicism on my part or on Holland's when I suggest that they knew that Mr Webb would not be in a position to send off every Dutchman who deserved to be sent packing? How many goals would Spain have won by if De Jong had been sent off? I think Webb did Holland a favour.
at 14:46 2 comments:

Explaining metaphysics to the nation.
I wish he would explain his explanation.
at 23:32 No comments:

Mmm. And I thought the Woodcraft Folk were interested principally in woodcraft and folkiness. Seems not. Seems rather that a little political indoctrination is also included. Read all about it in the Morning Star, here.
My question is this: how, exactly, do Woodcraft Folk boycott Israel? I guess they will already have thrown their mobile phones away and are using homeopathic medicines to treat breast cancer. Should you be a woodcraft folksperson in need of help there is a list here. Some of the brands you Woodcraft Folk must boycott are: Coke, Disney, Gap, Danona, M & S, Kit Kat, National Geographic, Macdonalds, Timberland, IBM, HarperCollins, The Daily Telegraph.... phew!
at 12:04 No comments:

Larkin and the Women

My friend Mr Adam Kean brought the article linked here to my attention. It mentions, albeit by way of a bit of Alan Bennett snidery, 'Monitor'; and of course Kingsley Amis crops up, as does Andrew Motion. I knew Amis a bit and liked him: "come and look after me Wynn", he once called up the staircase of the Garrick, and I met Motion when he came to speak to my Biography MA course. And let us not forget that my great friend Dr Moghissi hails from Hull. So I feel within touching distance of Larkin - but then, of course, that is the thing about Larkin. Anyone who is moved by his poetry feels within touching distance.

This is a good piece, accepting that it is not literary-critical; indeed it exemplifies the broadness of Larkin's appeal. It made me weepy (at that univied cemetery) and it made me laugh (out loud, with Mr Motion).

Thanks Ad, and thank you Rachel Cooke.
at 11:59 No comments:

Welcome to Thebes by Moira Buffini

As an example of what David Mamet calls "pseudodrama" this could hardly be bettered. Pseudodramas "begin with a conclusion (capitalism, America, men, and so on, are bad) and award the audience for applauding its agreement". In other words, this is like art of the academy - orthodox, worthy, dull.

It is a shame that so much talent is put to something so mediocre: the set is magnificent, indeed the design of the whole is faultless (Tim Hatley is responsible); it is seamlessly directed (by Richard Eyre), the playcraft is assured (the playwright must take some credit for this), and the acting first class, although it must be said that the play buzzes best when David Harewood's Theseus is strutting about the stage.

I'm afraid I can't be bothered to rehearse the "plot" (there isn't one, actually). I will mention one aspect that I found particularly difficult: the inability to resist cheap jokes. These punctured any sense one might have of the gravity of the crisis being presented. We were told how bloody awful things were, but never shown. If humour is to be employed then it needs to be black as coal, not the "motherfucking father" stuff directed at Oedipus's daughters Antigone and Ismene, stuck in for no reason other than for a chortle. Furthermore it underlined the gestural nature of this kind of theatre: there is no tragedy here, merely the satisfaction of prejudice.
at 07:33 No comments:


She's terrific. I'm all for Bulgaria this weekend. Mind you, she hasn't yet won her semi-final. Sorry about the "video" but I reckon this must be the Bulgarian National Anthem and it does us all good to open our ears to such things.

Odd title, but terrifically enjoyable little film with star turns from all concerned, from Bill Nighy as uptight assassin to Martin Freeman as shark-toothed rival and including feisty Emily Blunt, who bears comparison with Katherine Hepburn. Splendid portrayal of innocence by Rupert Grint. That is not to mention Eileen Atkins and Rupert Everett...

Although based on a French story, this has the authority and wickedness of a classic Ealing comedy. Plot's all over the place but this really doesn't matter as the real pleasure is derived from the performances.
at 13:42 1 comment: