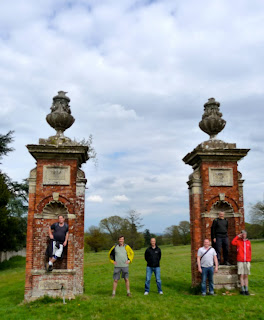 So: The Walk, 14/15 May 2010. Berks/Wilts: From Kintbury to Great Bedwyn by way of Inkpen. Departed a rather nice pub [name please] full of elderly middle Englanders, walked east on the Kennet and Avon Canal to Hamstead Lock. Utterly ignored ancient earth works around Hamstead Marshall and wondered instead at curious unattached ornamental gate posts standing like large forgotten pair of sentinels across a few acres (?) of Hamstead Park.

On then past the stray dog centre where a notice assured us that healthy dogs were never put down. Phew! What a relief, especially in the hindsight-light of the "dogs are unacceptable" line fed us at the end of Day 2 by those wishing to spread dog-hatred in our less-beturded-than-ever cities. By way of several copses and holts and commons and what have you (not forgetting the rather disappointing Skew-Whiff) we arrived at The Swan at Lower Green. This is a pub beautifully set and dismally owned. I say owned rather than managed because the manager was Thomas – a young, cheerful, chin-bearded chap from Czechoslovakia. Promised gourmet food, we met the chef, a Bulgarian who, all stereotyping apart, looked like a Bulgarian from central casting: swarthy and dangerous and perhaps even a tad wily. Many of us ordered stroganoff on the grounds that it must be sort of Bulgarian and would probably full of evil Black Sea spices and wotnot. It was one of the blandest dishes I have ever eaten. Still, it soaked up the cider that had been consumed while trying to convince ourselves that Andy, a diminutive, full-bearded, local character (straight out of ‘Jerusalem’), was not going to hit one of us in the eye with his own inimitable darts action. Andy also informed us that Walbury Hill, nearby, was the highest chalk hill in the world and only 17 feet short of being a mountain.

In the morning Thomas gave us a note from Andy, thanking us for the game of darts. It was accompanied by some organic shortbread. He signed it ‘Red’ Andy, adding a hammer and sickle for good measure. Ah, the Trotsky of Inkpen we thought and put £10 behind the bar as a contribution to the revolution (or, failing that, perhaps a pint or two). Thomas, beaming, took it, but said Andy wouldn’t need it as he was a millionaire…

I shared with AK in a room with no windows and an insistent ticking noise that I could find no source for.

SAF shared with RR and said it was a little like sleeping with a small piglet (although he did not vouchsafe this to RR himself until Sunday morning).

MDF & GOB, the long fellows, also shared. Both were late for breakfast. I don’t know what the Bulgarian thought.
at 15:40