Email ThisBlogThis!Share to TwitterShare to FacebookShare to Pinterest
Labels: film

It was Kandinsky's opinion that what he was doing in visual art was more or less analogous with what Schoenberg and Scriabin etc were doing in music. In which case why is it so delightful to look on a Kandinsky painting and so difficult to listen to a Schoenberg opus? To the dim layman such as myself they seem very far apart. Comments please.
at 23:43 No comments:

A Hell of a Town 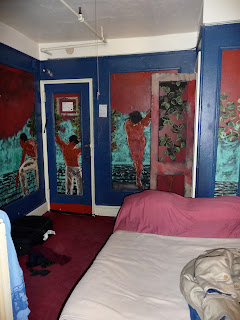 My room at the magnificent Carlton Arms Hotel

Except that there isn't much hellish about New York anymore. Some, I know, regret that, but I rather like the stately, Augustan, grown-up city it seems to have become. I have recently spent a week or so there. It was as cold as an ice tray, all solid squares and labouring radiators. i stayed at the Carlton Arms, a place that reminded me of low life Paris hotels of the 1970s, and highly recommended. And while I slept in the cheapest bed in mid-town Manhattan i dined seriously upmarket, once, with John Podhoretz, at Aquavita, a restaurant run by a Swedish Nigerian who does not offer scallops or lobster tails where one of each will do, and later my old friend Jody Tresidder bought me delicious tenderloin at the Hourglass on West 46th street. But it was the Plaza, in the company of Kissinger, Jackie Mason et al, for Norman Podhoretz's 80th birthday roast, that took the top honours so far as glitter and glam and cocktails were concerned. A true treat: intelligent chaps making funny speeches in the setting of the plushest ballroom west of Vienna, and the odd bit of klezmer as punctuation (not to mention Norman singing 'Making Whoopee', off the cuff, for the benefit of Mark Steyn). And New Yorkers themselves seem to have mellowed. i was allowed one breakfast time at least twenty seconds to decide on the flavour omy bagel, what i wanted on it and how i took my coffee. Int he old days I would have had to retreat to the back of the queue. All glory to the Big Apple.
at 23:22 2 comments: