Sports Personality of the Year

Well the one who made me weep was Jessica Ennis. Team has to be the Lions despite losing, because they undoubtedly gave the greatest pleasure. International: has to be Federer doesn't it? and international team (if there is such a thing) Barca. Are these all a bit ruddy obvious?

And why has Gareth Edwards never received a knighthood? Sir Clive Woodward? but Mr Edwards? I suppose when you are a god it doesn't much matter.

Have a Bobby Christmas

Of Mice and Men by John Steinbeck

I came late to Steinbeck because somehow nobody had ever insisted that I read him. I suppose about ten years ago I read 'The Grapes of Wrath' and then 'East of Eden', and it was clear to me that Steinbeck wasn't very far off the Tolstoyan peaks. Like Tolstoy, indeed, he is concerned with the great sweep of history, and like Tolstoy again he is concerned even more with the lives of individuals. "Of Mice and Men' has the power of Greek tragedy. Its lucidity and its fearlessness (Steinbeck does not run away from the edge of sentimentality or from simple meanings) are exemplary. I believe it is a book full of writerly lessons in construction and economy - less is more. The attempt in schools to turn it into a sociological tract would have appalled the author. This is a work of mythic scale.
at 18:06 No comments:

See How Easily You Can Transform 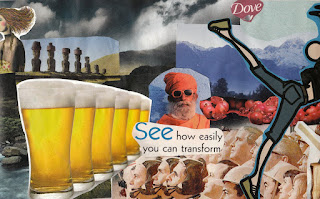 A meaningful collage by your umble blogger. I'm putting it up in case it gets "lost" when we move house.
at 19:27 No comments:

Email ThisBlogThis!Share to TwitterShare to FacebookShare to Pinterest
Labels: art

Orson Welles interviewed by Dad for Monitor, 1962 (click on the title above). And a clip from the movie itself.

Walking Back to Buck's by Tarka Huxley Kings 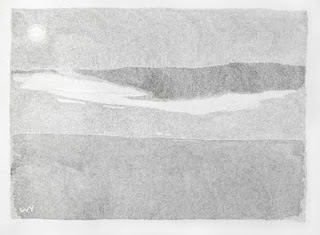 Tarka and Kate Atkin are showing drawings next week, 25 November - 8 December at 52 Hoxton Square. Looks pretty cold walking back from Buck's. I hope he sent them off with a hot toddy.
at 19:43 2 comments:

"Episode 3 in the ‘Hidden Histories’ series for BBC Cymru Wales, produced by Element Productions in association with the Royal Commission on the Ancient and Historical Monuments of Wales, will be shown on Tuesday 17 November 2009 at 7.30 pm on BBC Two Wales. It will include a feature on the wall sculpture ‘Avo Penn Bid Pont’ by Jonah Jones (1969–70), in the students’ refectory at Coleg Harlech, whose future is threatened by the proposed demolition of the students’ block in 2012."

The above is a message from David Townsend Jones
at 16:38 1 comment: 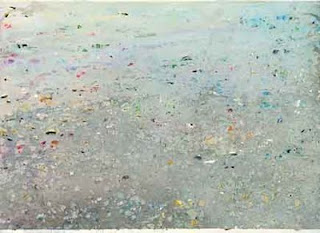 I saw this painting the other day. It is a picture of tidal marshland in the Blackwater estuary, near Maldon, site of that blasted battle all English university students had to read about in the original Anglo-Saxon. I liked it at once. I'm partial to works that play between the abstract and the figurative (Ivon Hitchens is my favourite). I learned furthermore that the co-author of the painting was the very sea itself. Luke allows the tide to do its work with his paper. He also uses mud, wax, watercolours. There is the sense both of super-realism as well as flat abstraction. Lots to look at inside it. Something too of Monet's late lilies.

Foreword to Poems by Robert Graves, 1945

"Since poems should be self-explanatory I refrain from more foreword than this: that I write poems for poets, and satires or grotesques for wits. For people in general I write prose, and am content that they should be unaware that I do anything else. To write poems for other than poets is wasteful. The moral of the Scilly Islanders who earned a precarious livelihood by taking in one another's washing is that they never upset their carefully balanced island economy by trying to horn into the laundry trade of the mainland; and that nowhere in the Western Hemisphere was washing so well done."

David Young brought this to my attention this evening. Really quite delightful.
at 23:38 No comments:

When i was young Amnesty International was an organisation recognised as politically neutral and therefore trustworthy. That is no longer the case. Read this.
at 08:44 No comments:

Many thanks to my friend Seth for the word JENTACULAR, which was new to me. Here is the entry from the OED

Of or belonging to breakfast.

Went to see Citizen Kane this evening with Jacob, at the NFT. It isn't my favourite film, but it is undeniably rich. Whereas most movies are concerned chiefly with framing the characters and providing rhetorically neutral background, in Kane the whole frame is full. There seems to be always more than one thing going on or more than one thing to look at in each scene. And of course as with any great work new things are seen on each viewing. This time I noted that the last words of the film are printed on a sign: "No Trespassing", an ironic comment perhaps on the biographer's questionable craft.
at 22:32 No comments: 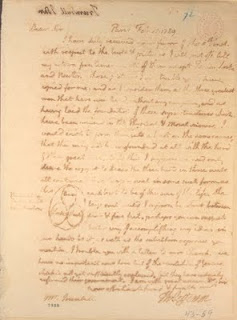 This is a letter from Thomas Jefferson to John Trunbull, dated February 15, 1789. In Jefferson's opinion "the three greatest men that ever lived, without any exception" were Bacon, Newton and Locke. Locke of course provided the philosophical meat for the Declaration of Independence (written by Jefferson). I post this now because I have just watched two hours of the magnificent 'John Adams', HBO's dramatisation of David McCullogh's biography. Apart from a few rather irritating bits of token (anachronistic) feminism it is almost faultless. Other than the central performances I particularly liked Tom Wilkinson as Franklin (a well-written part) and whomsoever played Jefferson (again, a finely made portrait).
at 01:00 No comments:

Legend of a Suicide by David Vann

This is a terrifically arch book. It is an amalgam of genres, including autobiography, memoir and fiction. I believe it is supposed to be One Thing. As I say, it is arch, very much the product of creative writing courses, written for the academy. Which is a shame because the central story, about an almost comically inept father and his son trapped on an island off Alaska approaches a Tolstoyan grandeur and simplicity at moments. Unfortunately it, too, is spoilt by creative writing-itis, as the point of view shifts mid-way from son to father for a reason I shall not give away (although it is preposterous). So some good stuff and I certainly couldn't do better. Has a lot of fish business in it.
at 22:52 No comments:

Anne Bayefsky at the United Nations

Anne Bayefsy is a highly-regarded Canadian human rights lawyer. Unfortunately for her she is also regards Hamas as a genocidal terrorist organisation, not at all a fashionable view at the moment.
at 11:42 No comments:

This is the classic 'Megan's Shoes', the movie that introduced my sister (or at least her shoes and dodge tights) to the world wide web.

The Humbling by Philip Roth

New novella by Philip Roth. Covers familiar Rothian territory, namely the identity of the self. This time the protagonist is an actor who has "lost his magic". He has lost his ability to be someone other than himself, and in doing so he has lost himself. As usual in Roth books, sex is the answer, the place where he can slough off any personal identity and become merely animal. In this book the sex is with a lesbian who eventually reverts to her original predilections in the actor's presence, donning a strap-on dildo, and thereby becoming no longer herself but a pretend man. The bed becomes a stage, and therefore the actor is robbed even here of the ability to be his primeval self. Roth is all ego and id. But he writes beautifully, beautifully, beautifully. However, among our senior novelists I do not think Mr Roth is maturing as well as Mr Trevor.
at 10:02 No comments:

Good film. First rate central performance from Carey Mulligan, who is both pretty and plain, young and mature - in other words perfect casting for the wise and naive Jenny. In fact the strongest element of the film is the casting which is spot on throughout. The ethos that pervades it all is of course liberal, but in the end our sympathies lie not with the young man who shows Jenny Paris but with the stuffy "frightened" father so well played by Alfred Molina. Not unlike 'The Discreet Charm of the Bourgeoisie' the picture ends up extolling the virtues of the milieu it affects to despise. The touch is light and the drama never really compelling, but it is a change to see something a little less than breathless in the cinema.

PS "Rating: PG-13 for mature thematic material involving sexual content, and for smoking." Dpes this mean that 'Casablanca' is now a PG-13 in the USA?
at 15:35 No comments:

The Death of Bunny Munro by Nick Cave


Nick Cave's new novel. Part picaresque, part ghost story, but chiefly an old-fashioned morality tale concerning itself chiefly with lust. Bunny Munro, named for his ability to copulate like a rabbit, as well as for his animal nature, is a salesman for Eternity Enterprises. He sells anti-aging creams to vulnerable women. After his wife's suicide at the beginning of the book he sets off on a journey to hell, in the company of his son, Bunny Junior, the true hero of the book, and the character closest to the reader. Bunny is a disgusting, repellant, charmer, but he is undeniably full of life and as irresistible to us as he is to the women he seduces. Written with tremendous verve and love of the unexpected simile (hair pouring down the back of a character "like chicken soup"), this is an enjoyably old-fashioned book, and altogether more compassionate than you might think.
at 21:00 No comments: